Did The Whole Tri (Practice) plus a few questions

Wednesday I headed back to Lake Dunmore to practice all of the triathlon I will be doing there on August 26.  I can't say I was thrilled that the thermometer in the car was saying 57 degrees. I wasn't worried about being cold in the water but I was concerned about the bike.

My friend Cathy met me there and she couldn't believe I was going to bike and run in what I was wearing under my wet suit which would be wet when I was done swimming.  But I wanted to replicate the whole thing as best I could. This is the first time I have worn my tri clothes.  I received the tri shorts for Christmas and had not tried them on yet. Thankfully they fit.  I can't say I look good in this outfit - LOTS of muffin top.  I should have been wearing this all summer and it may have stopped a few things entering my mouth! On the other hand the wet suit is like a big neoprene spanx. Yes, take my picture please when I am swimming and then put the camera away. 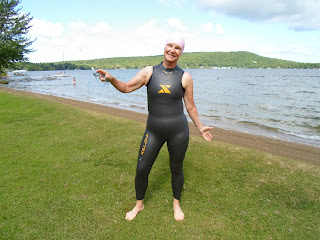 Okay the light pink swim cap makes me look like I lost
the top of my head. Not such a good look.
So I got into the water and Cathy started the stopwatch on my phone. I did not stop it until I was done running.  But times are estimates.  First question:  I brought PAM but forgot to use it. I thought it was so the wet suit would come right off but it easily came off without it.  When do you use the PAM and why? The water in it (is mine too big) makes it slide off easily.  I cannot imagine getting a smaller wet suit. I was between a large and medium and went with the medium.  Next question:  What do you do with the zipper pull when you are swimming?  Mine just flops around yet I kind of like it because if something touches me I just say, "No problem that is the zipper pull."  It felt kind of rough where the velcro was which I assume body glide would take care of.  No chaffing - good thing about swimming whatever distance I swam. So I once again estimated my swim.  I am swimming what it looked like they swam in the triathlon and then some.  It looks like more yet I am swimming it a bit faster than I expected so I am not sure.  It took me about 17 minutes and that is fast in my world.  This time is the biggest guess due to being unsure about the distance but 24 laps takes me at least 20 minutes.
Then I got the wetsuit off - easily and went to the car.  The transition took 5 minutes plus but I did get my bike out of my locked car - not necessary on race day. It took a bit to get my socks and bike shoes on, a little sun block (is spray the way to go due to quickness?), and I forgot my water bottle!  Then we were off, Cathy offering to pace me at about 15-16 mph.  It was hilly as before but most of the hills are fine.  It was very windy on the main road which did slow us down some esp. going downhill.  I am not at all into taking corners at a high speed, I slow way down but that is not going to change anytime soon.  The last big hill killed me. Cathy got way ahead but I got up it and finished the loop around the lake back to the start at my car!  It was about 14 miles and took me 54 minutes.  My pace was about 15.4 which is what I was shooting for. I was okay with that.
The next transition took slightly more than 2 minutes. I think I can speed this up but I can see why you practice.  The bike had to go back in the car. I changed to dry socks which I may not do in the race but it was too tempting today.  Cathy did another loop on her bike.  I forgot to drink while I was at my car. Total fail there.  I also forgot to get the Garmin started so satellites were not located when I started running.  Stupid.  I was surprised that my legs didn't feel bad. I did push it on the bike not worrying about the running later.  I don't push as much swimming as don't feel I will get as much bang for my buck.  This was the quickest I have gone from biking to running and it felt pretty good.  The wet tri suit felt great by this time although I met people walking with pants and hooded sweatshirts.  It made me laugh.  The road was shaded with rolling hills.  I don't know where the official turn around is, I just used my Garmin.  I thought I was doing fine but as I looked at my splits after I definitely did better each mile. I am so motivated by racers around me that that is one thing I may not like about tris.  By the time I am running there may not be many racers near me.  My overall time was 29:34 and I was hoping it would be under 30 so pleased. I did not know how I would do after swimming and biking first.  My splits were:
10:05, 9:25, 9:10 and 8:58.
My total time was 1:52:39 by my phone stop watch.  My secret goal for this tri is to go under 2 hours.  I would feel more confident about that if I knew about the swimming course but I think I have a good shot at it.  I absolutely enjoyed doing all 3 things.  I was thinking on the way home about all my half marathons and how tired I am at the end. This had a whole different feel.  I am pleasantly tired but but in a different way.  I did notice fatigue when I was running for sure but not too bad.
I need to make some lists for what I need to bring.  How much room do you get at the transition area for your stuff?  Today I used a bag for each discipline in my car but I can't imagine I will have that much room. 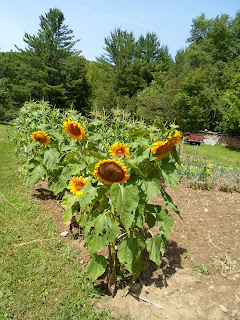 I'm doing my first tri in 23 years and have lots of questions in my head, too. I did that duathlon a couple years ago in the same place this triathlon is so I'm familiar with the course (and I run there frequently) but there's so may logistics I need to think about in the transitions, I fear I'm going to spend a lot of time in transition to make sure I don't forget something. Maybe I'll make a check list - haha.

I'm not wearing a wetsuit (no need here, but I don't have one anyway) so I'm not help here. I just think you gotta do one to get the "unknown" behind you....just like the first time you ran a marathon :).

It's going to go great for you, I know it is. You have put lots of thought into this one race and working out lots of details. I can't believe the time is almost here!!! :)

You are going to be so well-prepared! As for space, you probably won't have a lot of room - just the area underneath your bike & a little space behind it. I've seen people put their stuff in a 5-gal bucket that they fill with a little water so they can rinse their feet off after finishing the swim (if you have to transition in dirt/grass). After you use the water, turn the bucket upside down and it becomes a stool to sit on while you put on your bike/run shoes, etc. Handy!

Good luck!! I think you are so ready, and I think you will easily be under 2 hours for race day!!

Yes, you have NO space - about the amount of a half folded towel. As a matter of fact that's what I usually bring, a beach towel that I fold in half and put everything on. I always bring an extra water bottle that I leave on my towel to quickly rinse my feet off. Then I just touch my feet on the towel to somewhat dry them.

I tried Pam for my wetsuit and didn't think it worked well and ended up buying the real wetsuit stuff, but I have a terrible time getting mine on and off. If you are easily able to get yours on and off I wouldn't worry about it. Some of my friends have no problem and some of us struggle. My theory is that if you have thin legs it's sooo much easier. I have very thick legs for my overall size so just starting it is sometimes impossible.

Good luck. Feel free to e-mail me with any questions!

You are ready for reaching your goal! Good Luck!

You are amazing! I am so in awe. I wish I could be there to watch.

wow, look at you go! I use the PAM so I can get it off quickly but if it works for you...then I saw don't worry about it!

No advice for you, but it sounds like you are ready for your tri! Way to go on the practice run.

Great training, well done! i did a few tri's many years ago but no wetsuit so also no hints and tips from me. You are preparing so well the race will be easy for you.

Sounds like you are really prepared for this race!!
I know nothing of wetsuits and Pam. The first I had heard of that was reading Emily's ironman reports last year!
I'm far from an expert but I set up a trash bag (it had rained the night before and the ground was wet) with my towel and all my other stuff on it. I put things that I needed for each transition together. I needed less stuff though since I rode the bike in my running shoes.
I think you are more prepared than most for your first tri!

I think you don't need the PAM if your wetsuit comes off easily.

Why don't you put on the sunblock before the swim? That's what I do...

I practiced laying my stuff on a half folded towel. I took a few tries to get things into an order that makes sense.

You're going to be fine!

I really think you're going to go great! Everything you've been writing sounds so positive. Everything is going well. There's no reason why you can't finish your first tri within your goal time.

I don't use PAM. I usually apply body glide to my wrists and ankles but I don't think it helps much. I just let the zipper flap around.

Yep, tris are a lot easier on your body than pure running races. Three plus hour tris are easier on me than two hour running only races.

You are going to do great!