The Road Not (Usually) Taken

I am using one of Robert Frost's poems to illustrate my point today.  I had crappy runs on the weekend and did not want to continue the streak.  Tuesday I was taking a short 4 mile run and was undecided about what to do.  I headed down my driveway and turned left as usual but when I got to the end of the road rather than turn left I turned right.  This is not a road I never go on but it is extremely rare. When I first went down it I was only going to go a short ways and turn back toward my usual route but something kept me going. This road is also along the river but once you get to a certain point it is only you, the river and the woods (and the road of course.)  It was relaxing and the river always soothes me.  I am not sure why I take this so seldom - could be because traffic seems closer and there are more blind corners plus it is hillier but nothing horrible.   Tuesday it was exactly what I needed and I was able to come home and feel like I had had a very good run.
Have you ever had a turn in the opposite direction make a difference?
Two roads diverged in a yellow wood,
And sorry I could not travel both
And be one traveler, long I stood
And looked down one as far as I could
To where it bent in the undergrowth;

Then took the other, as just as fair,
And having perhaps the better claim
Because it was grassy and wanted wear,
Though as for that the passing there
Had worn them really about the same,

And both that morning equally lay
In leaves no step had trodden black.
Oh, I marked the first for another day!
Yet knowing how way leads on to way
I doubted if I should ever come back.

I shall be telling this with a sigh
Somewhere ages and ages hence:
Two roads diverged in a wood, and I,
I took the one less traveled by,
And that has made all the difference.
Robert Frost

Monday night we had thunderstorm after thunderstorm here.  One would end and another would begin.  I was surprised the river wasn't higher with all the rain we got.  South Hero where I had ridden my bike earlier got particularly hard hit.  At my house in the first storm it started with a great deal of loud pinging which was hail hitting the roof. It hailed for a few minutes and I got a few pictures of the hail on the lawn. Thank goodness the cats were in as one is particularly scared of thunderstorms and the hail would have totally freaked him out. 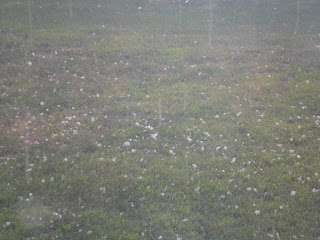 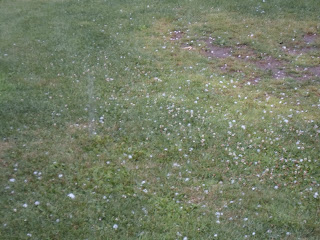 I have a few routes I run often and running them in the opposite direction sometimes is always good and refreshing. Our cats are also afraid of thunders storms except for one that actually goes and sit outside to watch the lightning.

I love that poem and yes, I do change up my route (sometimes just reverse it) and it's shakes things up. It's been stormy here too. We need it badly.

I have always loved that poem! Glad you ended up having such a good run!

We got into big storms on our drive into Colorado and we are supposed to have some every afternoon for the next few days.

Frost always grabs my heart--that one in particular I find so thought provoking.

Anyhow--I love to change it up somedays. In fact, I will often head out the door not quite sure which route I'm going to take and decide as I go. It definitely helps the boredom factor.

I enjoyed that poem. Thanks!
Sometimes I just run with no idea where I am heading. I just go, turn whenever I want, stop whenever I want. It is quite freeing, actually.

A change is as good as a holiday. Sometimes it's just too tedious to do the same old route again so it's good to change it up. I changed one of my routes a little today and really enjoyed the different scenery.

I honestly can't remember the last time it rained. On the bright side, the high today is less than 100.

I don't usually vary from my route unless I'm running with someone else and they're choosing the direction. I waste so much time doing other stuff that by the time I get around to running I don't have time to explore.

Sounds like just the route you needed. I vary my routes as often as I can and often change routes while running depending on how I feel.