A Blissful Ride in my Beautiful State

Wow!  What a wonderful, fantastic, awesome, terrific bike ride I had today.  I wasn't the only one who thought so. I dragged my biking buddy Cathy along and she is already planning on going back Thursday with friends and Saturday with her husband!

The weather report this morning was iffy so I kept looking until I found a weather report that said storms would hold off until 2:00. And it worked.  No storms.........just lots of wind.  We rode 38 miles which is a post injury high.  My friend, Cathy, had ridden here last year but NOT on the East Shore which believe me is the best.  It must be the only place in Vermont you can ride along Lake Champlain heading north and the lake is on your right.  I prefer the Vermont side to the New York side where you see more houses and buildings. These pictures are all from the East Shore. 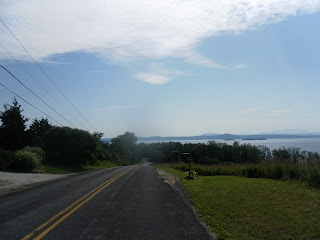 One of the first times you see the lake and you know the ride is
going to be a good one. 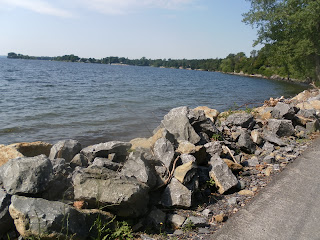 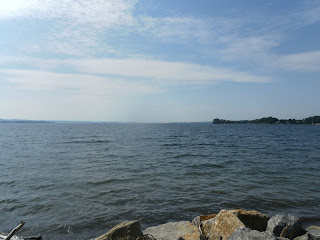 When I ride nothing hurts it is just uncomfortable to have my splint on.  Yesterday I ran  without it and I am beginning to believe I will be riding without it soon.  I will be thrilled when that day comes. 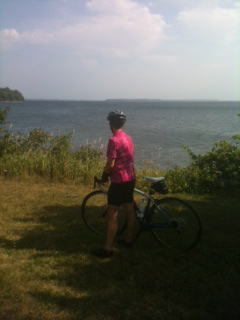 Today we rode along the East Shore and then crossed the draw bridge into North Hero.  We headed off the main road trying to find a route where we could see lots of camps out in the lake along a thin strip of land. Well, we found a nice road to ride on but it wasn't the one we were shooting for.  It ended too soon and turned to dirt.  I was gawking and not realizing how soft the dirt was and my bike slowed and started to lean. What happened?  I UNCLIPPED and life was great!  Good confidence booster.  As we turned around and headed back we went by this dilapidated camp that was obviously no longer in use.  All of a sudden I yelled and turned back. That was the camp I went to two summers as a young child.  I did not love it when I went but it certainly is in a beautiful spot. It is so too bad that it is not being used for something.
We kept going and crossed back into South Hero and went on the West Shore on our way to the ferry.  Then we took the ferry to New York for a short ride there but a beautiful one.  A ferry ride = a forced rest and snack time! 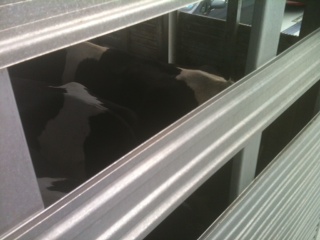 On the way to New York on the ferry we saw these cows.... 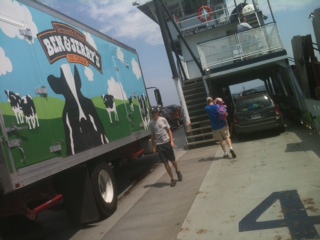 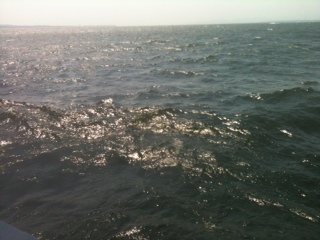 The water was rather rough.
After we got off the ferry on the Vermont side we lost our lake view on the way back to the car.  It looked hilly but the hills were not bad at all.  I felt rather euphoric from such a great ride, one I have been wanting to do all summer. And today it happened! 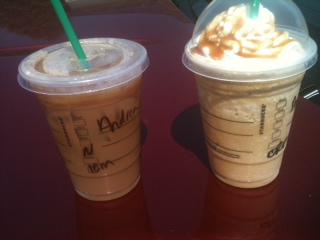 A great ride on a beautiful day deserves two cold drinks.
Posted by ajh at 4:52 PM

Very nice scenery to ride through... and its cool to have a break on a ferry. That is something I won't ever be able to where I live.

Kinda cool that you stumbled upon your old summer camp from your childhood.

That cast will be off soon and how much better will those rides be? Even more awesomer if that's possible.

PS - I know it's the middle of winter here but I'm kinda hanging out for a frappe. And I'm blaming you.

Lovely ride! You are so into this biking thing the tri is going to be awesome!

I don't want to sound stalking-ishly. But I wish I could go riding with you. You always have such pretty views. We do have to slow down and take it leisurely though. I am not very experienced.

What a great ride!
Beautiful report!