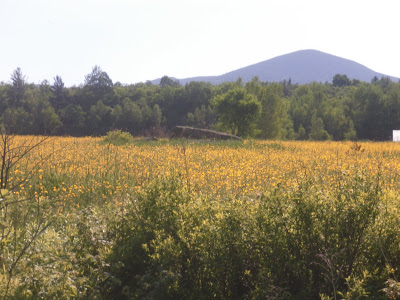 On my bike Saturday
I did my second official brick Saturday and it def. felt better than Monday's.  I waited  a bit before I started as it was 38 degrees.  It warmed up quickly and was a gorgeous day.  I took off down the mountain, across the flats and back up the mountain on another road. While I was on the flats I may have mouthed A*****E rather obviously to a driver who was passing a car and came way too close to me.  Then I thought it could be a future parent of mine, a hazard of biking in the town you work in. But at least we would have started developing a relationship.  As I was going up the mountain a biker caught up with me (not hard to do) and stayed with me until I made a turn.  I was surprised as this never happens when I am running. People are polite but they zoom right by.  He gave me a few tips (mostly about shoes) and was quite pleasant to talk to. He had watched VCM for the first time last weekend as his daughter ran in it.  Soon enough though I was turning to do my loop while he continued over the whole mountain, something I can aspire to in the way distant future.  I had a great ride, slightly faster than last week. When I got back home I changed my shirt as I was so sweaty and wanted to run in comfort. My run was much easier. Would that little bit of time had made a difference?  My run part today was more than 6 minutes faster than last week and felt it the whole way.  I saw no moose although I had a fox run near me. I don't like foxes at all. They are often rabid and eat/chase cats. I won't tell you what I jumped and screamed at while on my run.  It was living and was not a stick that I thought was a snake.

I am leaning toward not doing a marathon this fall.  If I don't I will sign up for the half.  I have found two more duathlons I could do in New York in July and September. I would like to concentrate on these (unless I hate my duathon next weekend) and not worry about a marathon. When I think about training for a marathon right now I get a little pit in my stomach at all the time it will take.  I may change my mind. I missed the first cut off for it to be cheaper so I don't need to decide yet. 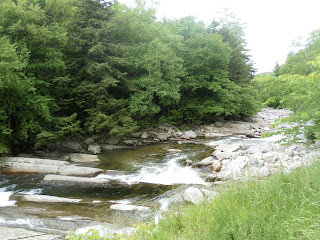 On my run Sunday

Sunday I was going to bike and run again but so far I have only run. Running may have been pushing it as I am not feeling that well. Somehow I got 8 miles in but I'm sure they come under the category junk miles.  I guess I feel if I can push through it I am building my endurance for when  a race is miserable.  But that may have been all the pushing I can do today.

One week from today is my first duathlon.  I am moving along the scale from nervous to excited. I don't generally get nervous before races but I certainly will be before this one.  I know so little about them.  Expect to hear more this week as it gets closer.
Posted by ajh at 7:56 PM

Here's wishing you the very best for your first duathlon.

Did you typed 38 degrees? That's kinda awesome. We have heat index in the triple digits + some crazy humidity and I am in absolutely misery.

Awesome! I'm so excited for your duathlon. I think you're going to love it. I decided no more marathons for me this year. I want to get faster. I think I'll do a half in Oct instead. We're kind of on the same track...I'm loving my bike and want to spend more time training on it than marathon training would realistically allow.

Beautiful pictures! As my SIL and I were riding yesterday, I was lamenting our Illinois scenery...corn, corn, and more corn. Of course, no more 38 degree mornings for us for a while!

I laughed at your future parent comment. I work 35-40 min from home, so it's a very rare thing for me to run into school families. Bad bc it makes it harder for me to be a part of the kids' lives (soccer games, after school activities), but nice bc I'll never have a parent drive by when I'm taking the dog out in my nightgown. :)

Nothing like a brick to start a Saturday. Well maybe except a huge stack of pancakes.

I think you're right in leaning towards the no marathon camp. Unless you're really committed to it it's not going to be much fun. Leave it for another time when you're burning to do it - and if that time never comes, so what?!

Well, after complaining about the miserable winter we had all season (nothing compared to yours), after only 1 week in this heat and humidity I would welcome a day starting off at 38 degrees.

You will be AWESOME at your duathlon!!

I've seen a few dead snakes so far this year, but none alive....I really hope to keep it that way!

I'm not nervous for your du at all, because I know you are going to be AWESOME! I really hope you love them, what a fun new challenge for you! I hear you on the time commitment for marathon training, and I'm pretty sure you'll find something soon that really excites you that you'll be happy to sign up for, marathon or otherwise.

Maybe it's time for new adventures; sounds like the bike is calling your name and training for a marathon will leave little time for that....I like the du idea! :)

I love du's! I did a few a couple of years back and really enjoyed them. Good luck. And kudos to you for such improvement in your brick!

I am already looking forward to your du report. As usual you are training hard putting me to shame.
I did not know foxes ate cats. I used to like foxes.
We have coyotes in our neighborhood. I am sure they would love our kitties for lunch.
I don't believe there are any junk miles. Call it recreational run. :)

Great scenery. One week, very exciting. I look forward to the re-cap!

Sounds like your workouts are going very well and that you will be ready for the race!

Driving home from the airport today I was behind a car with "AJH" in its license plate and it made me think of you!

YAY for the brick! Those workouts always make me feel hardcore. You are going to do great at the Du! Can't wait to hear about it!

I'm so excited to hear about your Du! I'd love to try one when I feel a bit more comfortable on the bike. Here are a few in my area (they're on the north shore of Mtl)...beautiful.

I know what you mean about marathon training. I am giving it another go, but I'm really taking one day at a time. If it goes well, I'll do it, if it doesn't, no biggie, I'm enjoying the halfs and they're doing the job of keeping my lungs strong.

Good luck next week! I have a feeling you'll have me wanting to register for one sooner, rather than later :)

One week!!! How exciting!
I made the decision to not do a full this fall either..and am kind of happy about it. My training is basically the same except I have more of my Sunday's free...Yeah!

Great workout Andrea and don't worry you will do great next week.

Do what feels good for you. You run a marathon for yourself and if you prefer to do 2 duathlons and a half that's great too.
I will never run a full mostly because of the time it takes to train for it.

You are simply going to do GREAT!! Calm the nerves - you are going to have so much fun!

One week to go ..so exciting! Anxious to hear about your race decisions!!

I really admire your determination and dedication with the duathlon training. All the best this week!

So... It took me a few minutes to realize you did not mouth the word "AWESOME". haha. So smart...

What a beautiful environment you saw while you were biking! I'm Glad your duathlon training is going well!

Awesome brick workout, and so nice to have some company along the way!

Nice work on your brick workout! You will be great at your duathlon. I think it's wise that you're not going to do a marathon... it will definitely give you more time for your family and to train for those duathlons and half-marathons you're eying! :)

Michael is always doing these brick workouts - you guys are warriors! Just running kicks my butt!

Yay for 6 days!
Love your top photo!
Yay for brick!
Love the photos.

You are so awesome. Duathlon. So. Very. Cool.

Yay! Wheres the duathalon? I rode a bike the other day. Ha!! It was my brothers who is 6'3", and I couldn't put the seat down. The Quinnster wanted me to ride with him. We just rode around the yard. I think I want a bike...
Are you doing basin harbor?

One week - how exciting! Best of luck! Diggin' your pictures - so beautiful up there! Too funny about the possible future parent.

i have tried to stop cussing or flipping off drivers just in case they turn out to be clients or someone's mom...but it really makes me feel better at that moment

I really enjoyed reading that, you painted a nice picture of your ride!

Good luck in your duathlon next week! I'm looking forward to reading how it goes. I'm considering signing up for a duathlon taking place in Biddeford, ME on Sept 17th!

Someday I want to try these tri/dual things. I watch and learn.

Have a fun time! I figure the first time you do anything so different it's probably not going to be the best time.....but you have to start someplace.

Be sure to enjoy!

That's so exciting about the Du!!!

I was thinking of doing Lake George, but now that I've been sidelined, I don't think I can pull off a June race. Still hoping I can do the Boilermaker.

I hear you on the marathon, I'm debating one in late fall but haven't committed. I've also got my eye on another half ironman in sept but also not committed. I'm just all about not committing and doing the training and seeing how I feel as the date gets closer.

Good luck on the duo! I know you'll do great!