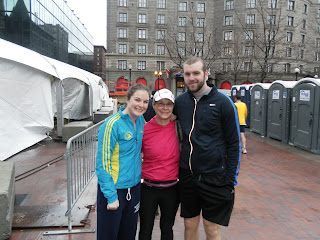 First race of the year for the three of us together.

Boston is alive with energy and anticipation this weekend.  We did our part today by having a blast at the 5K.  I raced it but the rest of my group played their way through it.  They didn't come in much behind me even though I was running all out and they were stopping, posing and going "slow." The goofing off started before the race. 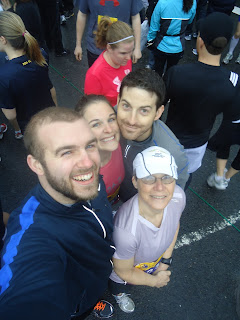 At the start - Jameson uses his long arms
for our usual group photo from
on high. 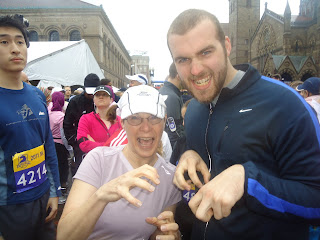 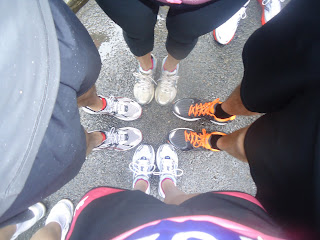 Shoes and feet all accounted for.

The weather was the usual "It's cold, can I really wear short sleeves?........where you keep second guessing yourself. In the end Emily and I went for it and once again, it was the right decision.  There were over 4000 runners and it was crowded the whole way through. 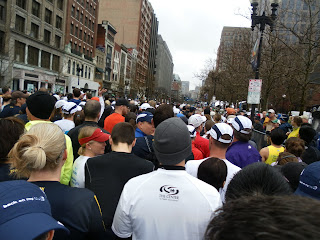 You could not move an inch before the start 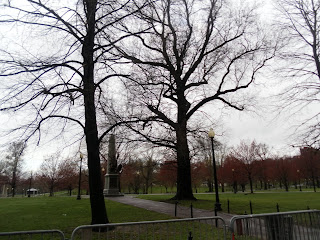 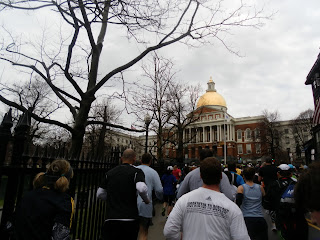 I had a slow first mile dodging around people. I thought it would get better as we got farther into the race but I had to weave and dodge the whole way.  People would walk right in front of you to cross the road.

But it was flat and I loved racing in Boston.  It was great fun to cross the marathon finish line.  I had a slow first mile where it was the most crowded but I was very pleased with the next two.  My overall pace according to the race results was 9:06 - best of the year in spite of all the dodging and weaving. 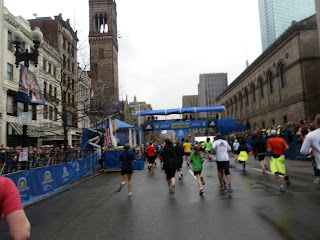 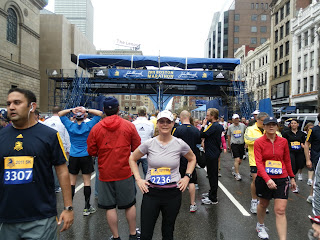 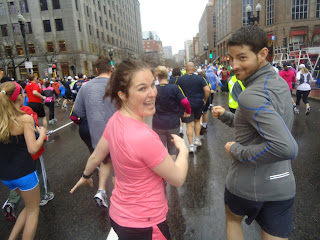 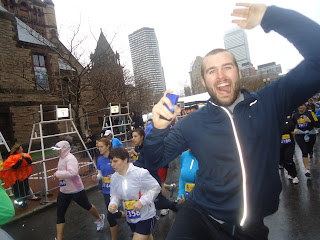 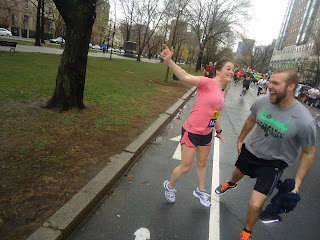 It wasn't long before my family reached the finish. 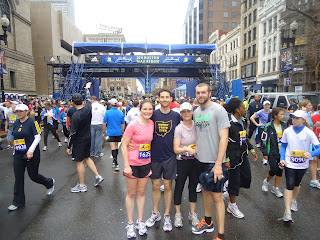 All done and accounted for 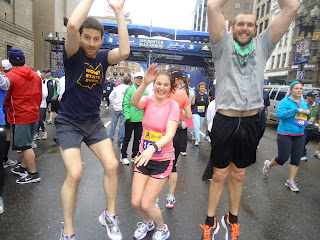 1 2 3 JUMP
We continued the day with two Expo visits by all of us and at least two visits to City Sports and Nike Town by Jameson and me.  The post adrenaline high from the race plus the I'm on vacation mentality convinced me to buy an awesome jacket and two pairs of shoes.  I'll post pics later.  Now I need to get some sleep to get ready for some major Boston Marathon Viewing, Cheering, Spectating and Cow Bell Ringing.

Awesome time - and fun as ALWAYS with your kids. Glad you are enjoying yourself!!!

Oh, fun! I love all of the pictures. What a fun family you have. :) Great job on your race!

Great job!! Fastest time of the year and in Boston! Awesome for you and good Omen for Emily tomorrow! I love the relationship you have with your kids. Awesome!!

yay! how fun is that?! That will be a family memory not ever forgotten! :)

I love, love, love how close you are with your kids. I will be cheering for Emily as well tomorrow! Have a blast!

Love this race recap - looks like such a fun race!

Yay! Congrats on an AWESOME race! I'm glad you enjoyed the B.A.A. 5K. I have the biggest smile on my face from reading this post and looking through all the fun and zany photos. You have a great family! :)

Great race for such a crowded course! Have fun spectating today - my mom and dad are also there to cheer on my sister and brother-in-law...

Well done on your race. It looks like your group had such a fun time.

And what a fun race this has been for you and your family. I love the pics!

Have fun today cheering for Emily.

Great running - especially mile 2! It's so great that you can get together with your kids to do all this running. Have a great time today.

Super duper Woot, what a great time with all that race congestion! I'm stoked for you! Boston race shopping is the best!

Ha! Those crazy kids and their shenanigans!

Have loads of fun today!

You guys look like a lot of fun... I want to hang out/run with you!
Have a wonderful marathon Monday!

That sure looked like fun :) Congrats on a great pace!!

A great time was had by all!

Looks cold and wet and still you had tons of fun but after the winter you had this was probably nothing. Love those orange shoe laces.
Congrats on a great race. Now eat some good Boston clam chowder for me.

It looks like you all had a great time. Very cool!

Looks like a lot of fun! That's not a bad time with a crowd like that around you, well done!

SO MUCH FUN! I loved Emily's recap of the race and loved reading yours now too! Congrats on your bets race pace of the year!

Congrats on the awesome race! It looks like all had a wonderful time. The pictures are great.

Well done on a great race in such a fantastic event! YAY! My favorite pic is of your running shoes together - that is awesome!

Enjoy the rest of your Boston trip! So excited for Emily! :)

Looks like so much fun! You have a great family!!! Congrats on your time!! I am tracking Emily as I post...

Looks like you guys really know how to have fun! Hope you are enjoying Boston. Go Emily!

Congrats on your run! 15/112 in your age group, that's really a great race!
Beautiful report!

15th in Boston sounds very good to me! You look ready to run another one in your finishing photo!

Wow, what fun. I don't think you would ever let me run with you....I'm too serious.

Holy Cow, you did great too. Your a.g. ranking was awesome. Congrats Speedy.

Congrats, looks like you had a lot of fun

You are such a fun family! What better place than Boston to have your best race of the year? I so wanna go back for that 5k one of these years.

Looks like you all had a great time! It would be so cool to get to cross the Boston finish line. :)

This really is the best 5k. But so crowded! I spectated it last year... Congrats on another 5k - and year-PR! I feel like there's a better term for that but it's escaping me for now.

Great report with beautiful and funny pics for a great race. Congrats.

That is so cool! I love how the whole family has so much fun together. Cutest family award goes to all of you!