Spectating Boston -Congrats to all the Runners 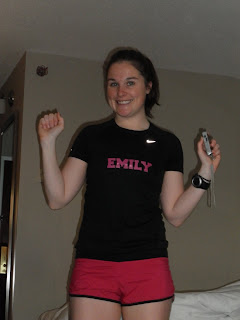 Emily just about ready to go VERY early
in the morning.

Spectating Boston is an awesome experience. I would not need to know any of the runners to have an awesome time.  But knowing someone...........and having that someone be your daughter = AWESOME.

Some year when I am spectating it will be warm.  At least bearable. But the first several hours were COLD!  Of course what the spectators want and what the runners want are very different things weather wise.

First we got our spots and stayed there with only one person leaving at a time for a break to get warm or use the clean bathroom in the Prudential Center.  As soon as someone left the other two would do the "wide stance" to save the spot.  Don't call us amateur spectators. We had a system and it was a good one. 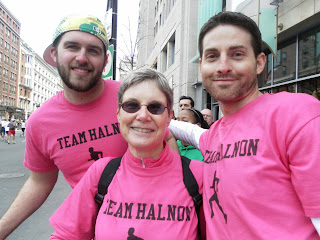 We rocked as spectators!

Once the first three amazingly fast wheelchairs came through it started moving quickly.  Before we knew it the women were coming.  Is that.........Kara Goucher?  YES!  I thought I had missed my hero, Joan Benoit Samuelson, when I saw a motorcycle escort coming and there she was!  I screamed and screamed and screamed some more!  She is so inspiring!  I found out later when I read about her that her daughter was running her first Boston marathon.  Very cool. 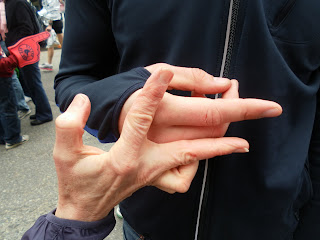 Can't see them but we are sporting cowbell blisters!

The men were coming now also and soon enough it wasn't just the elites. It is always fun to see the costumes although we didn't see too many. I watched one news clip and we missed some pretty funny ones.

If you really want to be screamed for and cheered at stumble, walk, look injured and like you might not make it at the end. Because the crowd goes wild. I think the love from the crowd helped many a marathoner to the finish yesterday.  It was heart warming, heart breaking and just plain inspiring to watch  and be a part of.

I really really enjoy seeing the "slower" runners farther back in the marathon but Em came in and we raced off to see her. 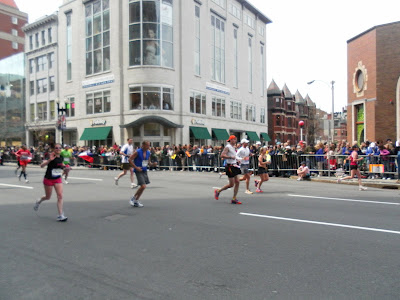 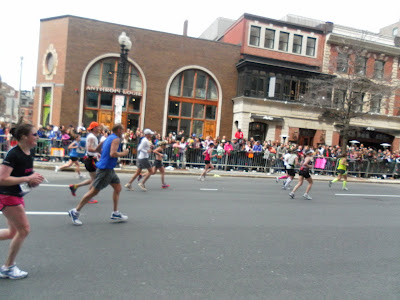 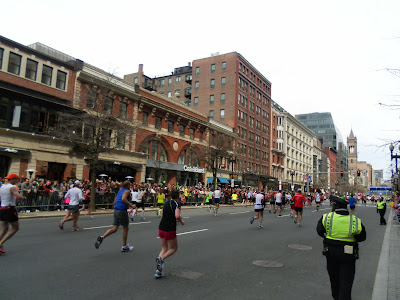 On her way to the finish!


She did an awesome job!  She improved her Boston Marathon time by about 9 minutes and had her second fastest marathon ever.  Jameson spotted her from afar (it is great having a tall son/brother) and we were able to wildly cheer for her. 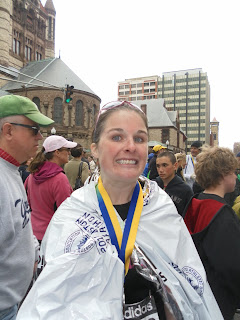 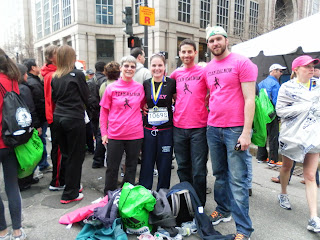 Emily, her supporters and all her stuff! 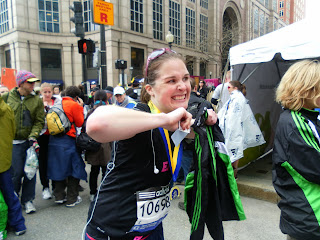 Now she can wear the jacket! 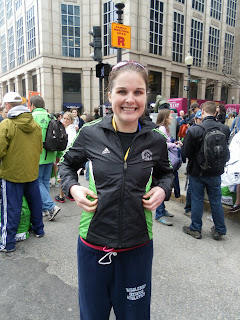 And it looks GREAT!
Congratulations, Emily!
Posted by ajh at 8:33 PM

WooHoo! Can just imagine how proud you all are! Em rocked as always. It was so great to meet her last year. You crack me up with your wide stance and cowbell blisters--pro spectators fo sho!
I too love Joanie B!

Awesome! I live in Boston, have done Boston twice and have never spectated. Next year I will run, but the following, I will be out there spectating!

That must be some amazing experience watching your daughter run Boston. I have cheered Boston marathoners many times when we lived in MA but nothing comes close to what you have experienced.
Congrats to Em.
Joan Benoit Samuelson is just amazing. Love her, love her, love her.

What a cool experience! So awesome that you were there to cheer her on!!

Congratulations to Emily!!!! I can't imagine how fun it must have beeen just being there! Great job on the cowbelling!

So glad you had a great time! Congrats to your daughter :) I'm glad she made it through in one healthy piece.

I love your shirts!! Next year I want to spectate at Boston!

Yay for Emily!! So exciting to watch your daughter at Boston! It was a very fun time to watch the race. I was by myself as a spectator so it was a bit more difficult. Sounds like you guys have it down to a science!

Congrats to Emily! Looks like you had a lot of fun spectating, and you and Jameson and Emily's friend (boyfriend?) are definitely professionals. Great shirts!

It's so fun to read a spectator report instead of the race reports. Looks like you, the rocketship and Jameson had a great time.

How exciting! Congratulations to Emily - what an awesome race she ran!

Sounds like a wonderful experience. I've taken note of the 'wide stance' for future spectating - you guys really know what you're doing!

I love your Team Halnon shirts! Emily really rocked that race and looks like she had a stellar cheering section.

Looks like mom was pretty proud - we were watching Em on the tracker and thought you would be pretty excited over her times!! Sure you probably can't wipe that grin off your face for a while :)

Fantastic! Well done Emily and well done to the supporters. Supporting is a hard job as well. I'm glad you enjoyed it. I love Joan Benoit Samuelson myself! Must say something about our age...

your Boston experience sounds fantastic from the 5k to spectating. Congrats to Emily - 9 min. improvement - wow!

Congrats to Emily and her support crew!

I think I'd die and gone to heaven if I watched one of my kids run the Boston Maraton. I guess I have one hopeful of the 3. HUGE congratulations to Emily - what an amazing accomplishment, so glad you got to be there for her!! Enjoy Boston!!!

She kicked some serious ass- you must be one proud mama!!!

Awesome job Spectating to you, Kevin & rocketship and awesome job running by Emily! Too fun!

too true: The first year I ran it and I twisted my knee badly, I walked and those spectators shamed me into moving again! :)

You are awesome spectators! I love the shirts and I laughed out loud at that pile of stuff! GO TEAM HALNON!

I've heard about the legendary Boston spectators but hearing an insider's perspective was great. I can't believe that you have to hold onto your spot for fear of losing it. I've never been to an event where the crowd is that big. What a wonderful weekend for your family.

I went to Bowdoin and worked at the fitness centers. I loved it when Joanie came in to workout. She's a huge inspiration! I would have loved to see her run this one in person but definitely enjoyed the pictures on the Bowdoin website of alums going nuts as she passed by.

PS - I love the picture of all of Emily's stuff!

It sounds like so much fun! Congrats to Emily.

I was thinking of your family Monday while I was online stalker Emily's every step. Forget about work, I had runners to virtually cheer for! She did so great and looked so cute doing it. Congrats to her and to you. You guys have your system down - and that is awesome!