Mostly Work with a little running 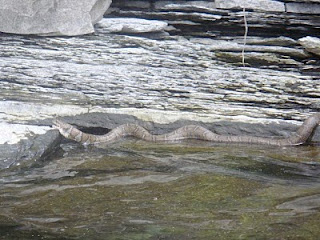 It is ALMOST THE END OF THE YEAR!  Yeah!  At this time of the year it is hard to keep students motivated and under control.  Yowzers!  They are done, done, done and the year needs to end.

Today though we did a couple of very fun things.  First, we have been studying the rain forest.  We concluded it with  a presentation for the parents.  The kids sang, read poems, shared research, shared pages of class books we had made and on and on.  Then we had "rain forest" food the parents had made.  It was excellent. All in all it was a huge success. The kids did well, abandoning the goofy things they were doing during our rehearsals and the parents loved it.

Then we had a guest presenter at our school.  He did two different presentations.  Originally my grade was scheduled for the first one which was on cute little salamanders. But we couldn't go to that one because of our presentation. Our librarian nicely switched us to the second one which was about snakes. Some of you know I am not fond of snakes, not one little bit.  This Middlebury College Professor is a herpetologist.  He showed many many many slides of snakes.  I must say he was incredibly interesting and the kids were spellbound. There were 5 classes of third and fifth graders and he totally had them under control.  He was engaging and very funny while imparting an incredible amount of information. After he talked about each kind of snake he would go back to a map of Vermont which showed all the towns.  He would have highlighted where the snakes could be found.  An amazing amount were in the town I teach in.  The kids would cheer like they had scored some huge victory.  One snake was a huge black water snake which was not found many places but surprise surprise - it was in abundance (he didn't want to say infested because infested implies something bad) in our town!  He kept telling the kids to document snake findings and email them to him to get credit for locating snakes in their town.  I am sure many went home to immediately get out the cameras. Now I only spent about 1/4 of the time looking at the slides as they were a bit too much for me.  The speaker spent a lot of time telling why snakes (for the most part) are not dangerous and why we shouldn't be afraid of them.  One of my boys kept turning around and grinning at me as they know exactly how I feel. I say it doesn't matter if they are not venomous (I learned not to say poisonous today.) If one bit me I would die of a heart attack and the end result would be the same.  I spent a lot of my lunch hour telling the teachers who weren't there about the presentation, then I came home and shared many of the stories with my husband.  That guy was some great presented to so fascinate me who HATES and DESPISES  all snakes! (Some of my teacher colleagues who know me thought I should get an award for taking my students to this and staying for the whole thing!)


I have been back working out full force  this week and all 3 runs so far have been great. I have strength trained twice and am feeling pleasantly tired from a good effort!

BTW I may have to delete this image soon as I am feeling sick just looking at it even briefly!
Posted by ajh at 9:12 PM

Looks like you're at 103 followers :)!
Yes, there is no image of a snake on your blog, and I'm ok with that cuz really, I'm not sure how you could listen to endless snake talk - ick! I see them on the trails I run now and then, they are harmless but they just scare the crapatola out of me! Nice job on the workouts, girl!! Keep it up!

What you wouldn't do for those students of yours. You are a brave woman :)
Great job on the workout!

Good luck with the last days of school. I remember the excitement and electricity in the air when summer was near...it got a lot harder to concentrate. I can only imagine how hard that was for the teachers.

You do deserve an award for sitting through the snake presentation!

I'm glad that the rain forest project went well! I bet it was really cute.

I saw a (dead, thankfully!) snake while on my bike ride this morning and literally screamed like a little girl! Blech! I agree that you deserve some sort of award for taking your students to this presentation - well done! :-)

What a FUNNY story, there's always something going on at school with those kids and our events, right??? I'm excited for you, we're almost done! I still have one more week after this.
You're keeping up with running, well done!

You should not see anything except maybe bull snakes on the Summer Roundup course. However, Garden of the Gods is another story - second most frequent place we see prairie rattlers...

Keep us posted on your visit. We are amazingly flexible on schedule.

I applaud your sitting through an entire presentation on snakes. Just thinking about it is giving me the creeps! Happy running!

Great job sitting through that! Your school sounds like so much fun. The types of presentations and projects that your students do seem great! It must take a lot of planning.

Good for you keeping up with those runs and strength workouts even though you are busy, busy, busy wrapping up the school year.

Times like this, I wish I has a teacher!

LOL! I HATE snakes, too! Way to sit through it! And it sounds like you're going to have to watch where you step from now on while on your runs :)
Happy almost end of the year!

UGH! I hate snakes. You are dedicated.

I have to confess I love snakes. Well, I live in Africa and snakes have always been around where I've been. I even had some pet snakes when I was at school. Still, you've got my respect for doing that for the kids. Congrats with the 100 followers!

We had a presentation like that at our school and the kids loved it!! I was going to take my son to a library presentation with the boa constrictor this summer.

I'm not down with snakes either! Happy to hear your workouts are going well!

I'm not a fan of snakes, but my boys love them. Ugh.

Congrats on the 100 followers!

Good Lord! I am terrified of snakes:) I respect them from a far.......way far! You are such a good teacher!

oh i would have run screaming from the room and let the presenter-guy take care of the kids :) i haaaaate snakes!

(thanks for not posting a big, obvious, gross snake picture!)