Three Runs in One Day

Today was an excellent running day! First I got to have my first bloggy meetup with MCM Mama.  She found a sitter for her son and took time out of a busy day to go for a run with me.  It was exceedingly hot but she found us a shaded park to run in on Roosevelt Island.  I navigated the Metro for the Meet Up and everything went just great. We didn't run too far because of time committments and weather but it was great to meet her.  She's coming to a race in my state in the fall and if it works I may be able to race it too. It is even one I could talk my son into doing with me. ( A brewery is involved.) 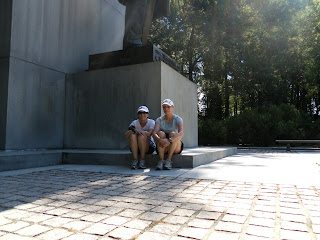 1st run - with MCM Mama :) :)
There was a lot of time left in the day and I wasn't too hot thanks to all the shade so I decided to head to Arlington National Cemetery.  I took my time visiting the parts I wanted to see as it was feeling rather hot at this point.  When I was finished I decided rather than take the Metro to my next spot I would run.  I could see that the bridge near the Cemetery ended up at the Lincoln Memorial.  Well, I could find my way with  a huge landmark like that. So I texted Em and told her I was on my way to her office to take her to lunch if she wanted.  It did take me awhile as it was high noon at this point.  I went slowly and stopped to take pictures at various points. I loved running across the bridge to get  back to D.C. and I just couldn't get enough of running past the Memorials and Monuments.  When I was eating with Em she asked me if I was running back to her place and I said no although it had crossed my mind.  She suggested I come back later and we could both run back on a route she took me on last fall that I really enjoyed.  So I took the Metro back (Have I mentioned that small town girl AJH really rocks using the Metro on her own?) I showered for heat relief as much as to get clean and relaxed for a very pleasant few hours. 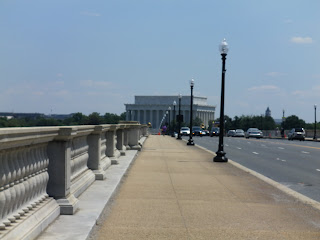 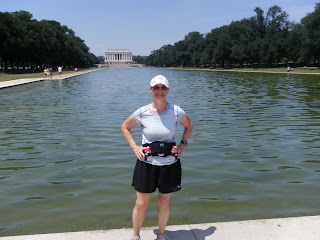 Standing at the WWII Memorial looking toward the Lincoln Memorial
on my solo run of the day
It was still very hot when I picked up Emily but I really wanted to get in my 11 I did not run the day before and to do another run with Em on a route I would enjoy.  She very nicely went my speed for the entire way.  So once again I found myself running by the monuments and memorials. It wasn't long before we were at the Lincoln Memorial and heading for the path along the river that ends up in Georgetown.  We stopped and took a bunch of pictures fooling around with the camera to try to get some action shots.  I loved this run in spite of the fact that I was fading big time. When we got to Georgetown Em took a route that didn't involve stopping at lights and crossings.  I wasn't as sure as she was that this was a good idea. Stopping sounded great!  But we got the 11 in and headed out for one more time  to eat at Busboys and Poets! 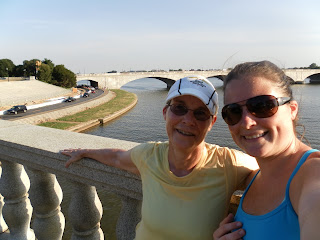 I'm hot and tired but the effort is worth it! 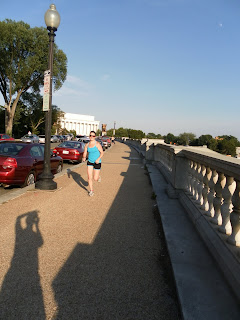 Playing with the multiple shot feature on the path home......
Today we got up bright and early for one more run together. We headed for the National Zoo!  We didn't see animals but did hear some might roars!  All too soon it was time to head for the airport!   I had a great time in DC with my lovely daughter!  It is great that we both love running so much as that really makes a vacation the best! 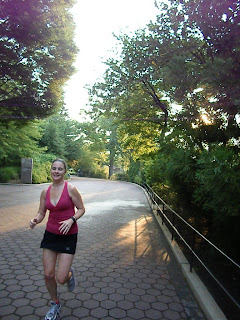 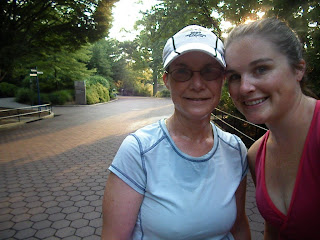 Where do you get all of your energy?! You just keep going and going! Glad you're sharing all of these fun vacation photos!

It sounds like you had a wonderful time in DC! I would love to run in DC with so many monuments and so much history. It's probably even better with your own running guide. That's a very special relationship you have with your children, and you don't take it for granted. Good for you! Nice mileage too. Enjoy the rest of your week!

Awesome!!! You are just the energizer bunny running all those miles! I got chocked up reading the end where you had to board a plane and leave Em. I cried when my daughter moved 20 minutes away...I know there'll be a day when she leaves the state, so I will just have to cherish the time we are together, as did you!!! And wow, I panic whenever I have to take mass transportation. In Boston, I had to have Katie's husband physically plant me on the correct train to get me back to my hotel after we were in the North End. Even then I still had anxiety and I didn't even have to change trains. Ha. You'd never know I minored in Cartography. Hahahah. I can read a map, I just can't change trains. :)

Holy cow, three runs in one day! You are a running machine:) How very cool to meet up with MCM Mama for a run and to know that you will both be running together in the future. I love that a brewery is involved! It is also so awesome that you could go on another run with Em...love the mother daughter runs!

BTW, I did run at the MN Zoo for a 5K race last summer with my daughter:) She finished before me because about 40 of us got off course! Instead of running the 5K like I should of I ended up going on a wild goose chase and ran 5 miles! Grrrr! I can laugh about it now:)

It's so lovely you came to visit and spend time with your daughter and that you ran your races together! I've been following you in my google reader, but cannot comment often on things due to firewall restrictions (stupid work ;), But I'm enjoying your pictures and your visit, DC is so beautiful, I just don't get out there often enough from VA. Glad MCM Mama and you got to hook up, sounds like fun!

I'm so impressed! I managed one extra mile on the treadmill before I had to pick up the kiddo and I was pretty wiped out. I'm glad you had a good time and managed to get everywhere you wanted to on foot or via metro.

Hopefully we'll see each other in Vermont or when you come to visit again. Glad you had a nice visit.

Woman!! YOU WEAR ME OUT!!! Sounds like your vacation was super great!

You are my inspiration!!!

Such a perfect vacation with your daughter...I loved the pics...you two look so happy to be with each other :)

Busy runner! Very impressed with your 3fer! Looks like a beautiful area for a run or 3. :)

Wow! I am impressed! Although what I great way to see sights!

Glad you had a good time with your daughter!

Now that is quality time! Looks awesome to run there. It’s so great that you can do these things with your kids.

What? You thought it was hot and humid here? Nah! Glad you got to take in all the sites and meet MCM. What a fun time!

Wow! Awesome job. So cool you got to run with MCM Mama. Love her!

Sounds as though you had the perfect day to squeeze all that running in. Love your photo's, I haven't been there in a very long time and certainly not when the weather was that nice.

What a beautiful city and awesome that you got to explore so much of it on FOOT! I am envious that you run with your daughter, and too cool meetign up with MCM Mama!

That's so great you can share that love of running with your daughter! And how fun that you got to run with MCM Mama!

You ROCK! Need I say more?

I think it's awesome that you are your kids are so active together. Something I dream of for my future.

I just love all the photos of your DC trip, I can feel the humidity coming through the screen - LOL! So glad you had such a wonderful running vacation.

youre amazing and make me feel pretty darn lazy :)

Sheesh! After all the breaks to eat I wouldve needed many emergency pit stops :) nice job on the 3-a-day!