Jaxon Places In HIs First 5K! 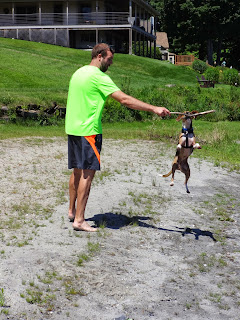 Jameson had asked me to be on the lookout for a race for us to do. When I saw one that involved dogs I forwarded it to him and he immediately responded, "Yes!" So I picked him up Sunday morning and we got to the race in plenty of time to register. 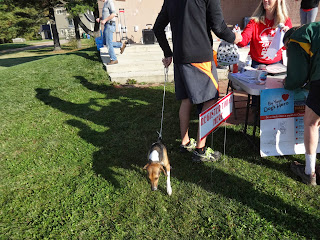 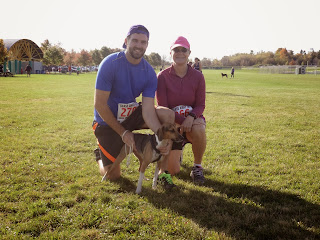 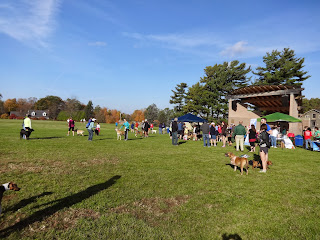 We head off to the start. Jameson had NO idea what Jaxon would do. He rarely runs with him as Jaxon often just refuses to go.  I have first hand experience of this from when I took care of him one weekend.  Jameson thought he might be going half a mile and having to turn around.  Jaxon might refuse to run.  He might be scared when the path was next to the road and cars were nearby.  He said it was fine as it was a good cause (Chase Away K9 Cancer 5K)  regardless. 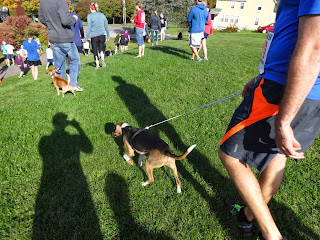 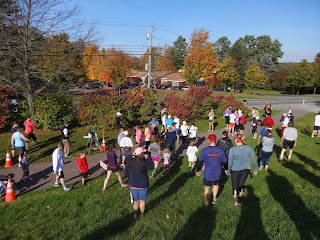 Jaxon looks a little hesitant although of course he has no idea what is going on. 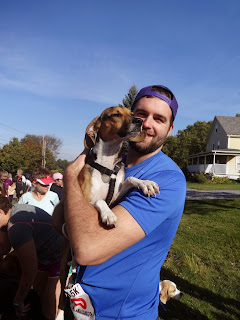 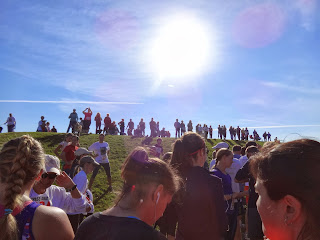 It was a gorgeous morning and the walkers are waiting up on the hill. 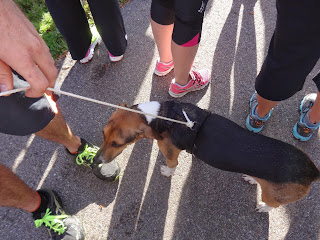 Jaxon started back quite a ways but he should have been closer to the front.  Who knew? 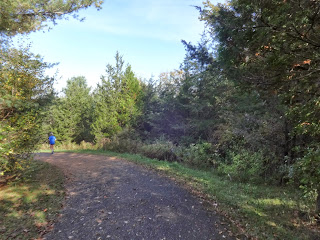 I guess I certainly negative split it.  And I would say the first mile was the hilliest!  But no complaints. I was racing on a gorgeous fall day with my son and his dog and many happy racers. 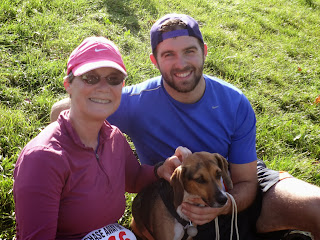 Now I need to get back to Jaxon.  He was the second dog in his very first 5K!  Yay to the best dog ever!
Overall I was 61/163.  But many people probably don't usually race or were running slower with their dogs! Certainly a fun day and a race I'll go back to. 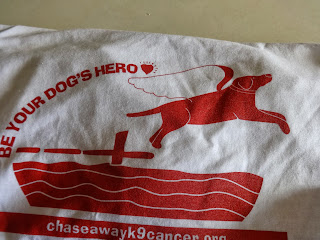 WooHoo congrats to speedy Jaxon! Looks like such a fun day!

That's awesome! What a good time to race with your son AND your favorite dog in the world! :)

Way to go Jaxon! - and what a great way to spend a beautiful day!

Good job Jaxon. I wonder if his human's held him up...

negative splits - YAY! Sounds like fun. We have a few dogs races here too.

Weather looks good on Sunday. Are yo doing the DU?

Great job on your negative splits. THat's the way to do it!

That was really a geeat time for you and your son!

Woohoo Jaxon! What a champ.

So much fun! Congrats to Jaxon, he's a real champ!

I tried running with Bella but she just doesn't like it. She won't move or runs in front of my feet. It's frustrating. So we do the 10K walk events every now and then and we are both happy :)

That's awesome! I've run 2 miles with Delilah before. Not sure she would be happy about going 5k, especially now that she's older. I can't get either dog to run with me on my own (they practically put on the brakes and give me the side eye) but at a race they love to chase after the other participants.

Jax is rather competitive like the rest of the family!!