You went really slowly why? 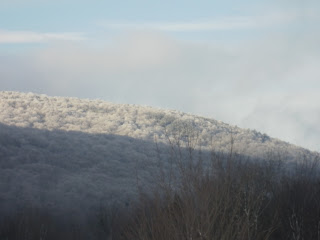 Across from my house when I got back from my
run.
All of my runs outside lately have been so slow and today was no exception.  But today I had an excuse!  There was black ice everywhere. For those of you not from  northern climates - black ice is hard to see and makes things rather scary whether in a car or on foot.  It is not unusual to hit a few patches of black ice as I tend to run early before the sun has done it's melting magic. But today it was almost continuous and I had not worn my Yak Trax because........

it is way too early
the road was bare.
So of course I couldn't get going fast!  Right? Right! 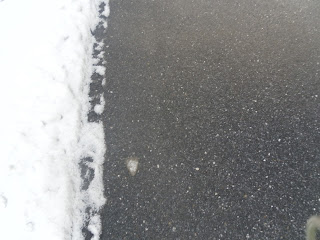 The BLACK ICE  which was everywhere. 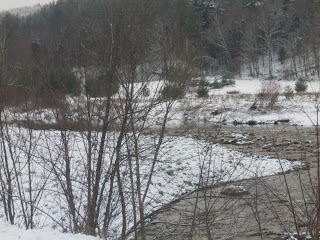 It's much too soon for this.
On the other hand all and I do mean all of my runs on the treadmill have been great. They have all been fast and continuous with no breaks - something I am not always able to do on the TM.  They have all been slightly under a 10 minute pace which is great for me in a non race situation.  They have been relatively easy and rather enjoyable. When I paid my monthly fee recently for my gym membership I felt a little better as I have been actually using the gym (twice a week but that's way up from no times a week) and liking it.
This week when I went to the pool on the other hand I forgot my cap and goggles. I almost turned around but I went anyways. Once  I got used to it it was okay.  I did all my usual laps.  No increasing the free style laps yet. It is still hard for me to do 3 in a row but before the new year I will try 4.  I promise.
Saturday I am going with my son to New Hampshire to get a new puppy.  I also promise that I will post puppy pictures.  A lot of you asked if my indoor missing cat had appeared.  Yes.  But.  He spent about 3 days  underneath some cupboards and rarely coming out. When he did he acted scared to death.  Today he has been "out and about" for most of the day and is currently sitting in my husband's lap.  I don't know what caused him to freak out so and hide but he is over it for now.
I finished The Night Strangers Chris Bohjalian's newest book. It certainly engaged me but once again I did not like the ending. I won't say too much and I would recommend reading it but if you do let me know what you think of it.  I took a book to my son's today and read while he and my husband watched football. I had a wonderful quiet Thanksgiving with them. We missed Em but she will be here at Christmas and she was with a lot of friends. 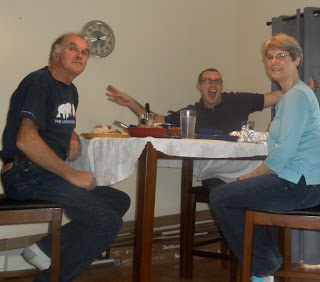 Our first Thanksgiving at Jameson's house.
I hope you all had a great day with friends and family.
I also can't resist showing you a few pictures from my other life.  We have been studying habitats at school forever..... and the final project was a flip chart (a cleverly disguised report) and a project. Most kids chose to do a diorama and they truly thought they had died and gone to heaven whenever they were able to work on them.  Here are a few. 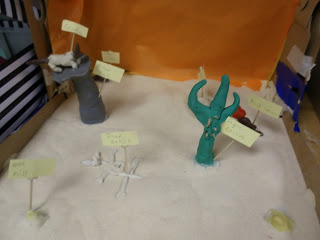 This kid went to a craft store to buy sand and impressed
all the other kids who used   dirt from the playground. 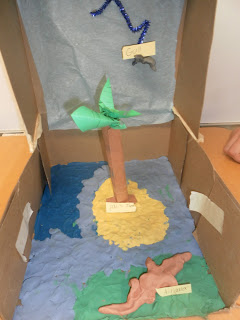 Notice the palm tree and alligator.  Lots of clay
was used in these projects! 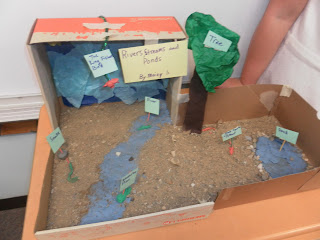 Toothpicked signs for labels were also a big hit 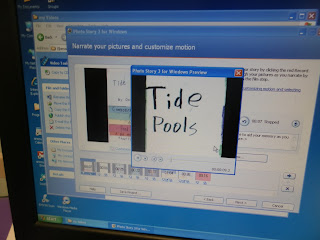 One student did a photo story which was fabulous.
At one time this would have been the first choice for
all but I guess there are more opportunities to use
technology so it isn't the draw it used to be.
Posted by ajh at 9:01 PM

It sounds like your cat had an adventure to forget! I bet you'd love to hear a blow by blow of all that he's endured. Looking forward to seeing the puppy pics.

Love the dioramas!
I can't believe you have all that snow and ice already, although I guess it is almost December, it just doesn't seem like it yet.
A puppy?! Can't wait to see - puppies are so cute.
BTW my mom is reading that book right now - did you find it was scary?

I would say black ice is a very legit excuse for going slow!! Can't wait to see the puppy pics!

Those projects are impressive! It must make you so proud watching the kids use their imaginations and resources like that. Education disguised as fun. :)

Black ice is SCARY! Definitely had some sketchy footing yesterday morning. Be careful!

Glad that your cat is at home again.
I am lucky because here we have the ice only into the freezer.
I'm looking for seeing the puppy pics.

Can you please possibly keep the black ice on your side of the woods for a while? We enjoyed the absurd 67 degree weather yesterday much more than snow and ice :))

Those are some creative kids - they must have an inspiring teacher ;-)

Be careful running on black ice. It is crazy to see how much snow and ice you have up north.

I can't wait to see pictures of the puppy. :)

Wow black ice and a dusting of snow? Seems early but I guess not really. Be careful out there! Ah dioramas. Brings back memories. So much fun!

It's easy to see that you had a great day with your family. Beautiful dioramas!

We are going to be working on dioramas, too! I will show yours as inspiration to my kids! I love the teacher stuff!

love the dioramas! glad you had a good thanksgiving. i think it was close to 70* here, i am soo not ready for that snow and ice business!

Very beautiful area with the snow!! It is about time for some snow now that it is December.