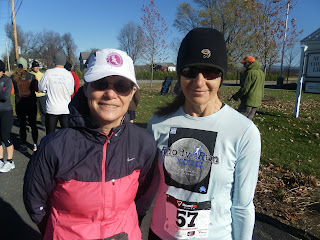 T and me before the race
Today I ran a race that never even made it onto my sidebar because I didn't know I was running it until this morning.  I decided I might as well to get November's race in. It was sunny and gorgeous out but it was also freezing.  The temperature was in the high 40s accompanied by a very brisk wind.  I played the "What should I wear?" game for quite awhile.  I ended up with capris, 3 layers on top and a baseball hat.  I considered a fleece headband and gloves as well as one layer on top. I was confident about the capris the whole time.  The hat turned out to be a good choice. I probably could have left the jacket off but I wasn't dying of the heat with it on. 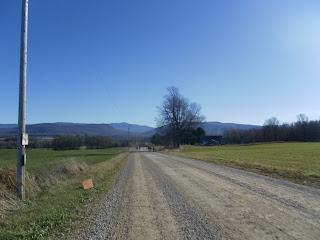 I liked this flat stretch.
It was  a pretty course with 3 hills.  I haven't run much this past month so I didn't know what to expect.  Plus I ran 6 miles yesterday which these days equates to a long run for me. I never run the day before I race but this time I did.  My first mile was around 8:55.  The second one was 10:05 (in a race???) and the third one was 9:40 I think.  The last .1 was in the high 8s again.  I did pass two women and stay there.  I was looking at my watch and saw that I was in danger of being over 30 and I did not want to be at all. As  it is my time was 29:43 which I think is my highest 5K ever.  But it was one heck of a lot faster than yesterday's run. I actually stopped and reset my Garmin and checked the settings as I thought it wasn't working. Nope!  I was really going that slowly.
T ran with me and she was way up in front with the faster women. I haven't found any results on line and there may not be any. This was an inaugural race and it was very small. I felt badly they didn't get more people but the advertising wasn't great.  After I came home I found a different November race I did two years ago that I really liked. So I may end up with two November races. I also registered for a December race that looks really fun.
I love having races to look forward to.  What do you have left for 2011? 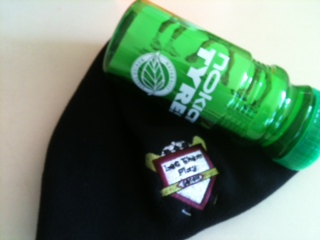 We got a fleece hat and a water bottle.
Posted by ajh at 7:39 PM

I like the hat idea instead of a shirt. Funny that you went from no Nov races to maybe 2. :) You've already seen my laundry list of what's coming up, though I have a couple more "maybe"s for November. A really fun (hard) looking cross country race with obstacles and a turkey trot with my brothers. We'll see. Sanity (and budget) may still win out.

I always think it's fun to run first-year events. You never know what you'll get. Sounds like a good move for you to jump in and do it.

I may run a 5-miler in Dec. (annual even I do) with friends at a very easy pace, chipless. We'll see!

Nice job on the race! I love the swag...I am kind of sick of shirts.

I have decided I am not doing any more races this year....or maybe next year either. (Can you tell who has had a bad racing year )

A hat is cool. I have enough shirts. Your slow is my fast. I have 2 mores this year - thanksgiving & dec 17.

That second mile had at least one hill in it I'll bet. I'm having to come to terms with running ever slower but I have to keep telling myself that at least I'm out there running, which is more than 90% of the population.

I would like a hat or something every once in a while - like everyone else, I have sooooo many shirts. I can't wear them all - probably need to give some away, but I'll probably hoard them. I've never just woke up and ran a race without knowing it - that would be kinda cool! Have a great week!

The sky is so beautiful, looks like it was a perfect day for a race.

I think you did great!

I have one more race left this year in December, a 5K. Next year the plan is to do more races than this year in the first 6 months at short distances (5 and 10 K) and as close to home as possible.

Well done for keeping it under 30min. I like the loot. Sometimes it is good to run a race you didn't really plan for. I have a very tough 20 miler at the end of the month and then a few shorter races I might do after that.

Funny that you thought your garmin had a fault - I often think that when I'm running slowly!

It's good to trick the body by jumping into something at the last minute. Not a bad time for a swimmer ;-)

Love the hat...that is a great idea! I have one more race in December which is on Boxing Day and it is actually one of my favorite races.

at the 10 mile race i did on 9/11 we got vests instead of shirts. they are from nathan and are super reflective. perfect for running in the dark :)

Nice swag for a small race! Inaugural events are fun. My husband and I will be doing the Corrida 8K in our town on New years eve this year - that's all I've got planned for the rest of the year.

Congrats on making it in under 30! Looks like a nice day to be racing - I enjoy cold & sunny!

No more races planned for me, but maybe some volunteering!

Nice hat, will come in handy for all those cold months of running you have soon. Not so much in the pool, though. :)

Didn't seem like this was a big pressure race so no worries on the time. You had fun with a friend and that's all that matters!

Way to hang in there and finish under 30.
I might be doing a Thanksgiving 5k race, but only if someone else in my family is racing as well. I am registered for a 15k on Dec. 3rd.