SM. I had my bag all packed to go use the elliptical at the gym after school.
S.M. It had stopped raining so I drove past the gym and came home to bike.
D.M. I asked my husband if it had stopped raining for good.
D.M. He said yes.
D.M. I listened to him and used my new bike instead of my old.
D.M. I brought my new Iphone and camera.  (foreshadowing)
S.M. I put both of them into a plastic bag. (more foreshadowing)
S.M. I took a picture right away of some foliage.
S.M. When it started to rain I put the camera and Iphone in the back bag which zips closed.
D.M. When it started to rain I was only about 1 1/2 miles into my ride but I didn't turn around.
S.M.  I had a blast on the ride so I was glad I didn't turn around.
D.M. Even though I had a blast I was worried about my new phone and could have brought it home and then kept riding.
S.M. I wore pants on my ride to keep the "mud splashes" off my legs.
D.M. They weren't my rain pants.
D.M. I couldn't have been more soaked if I stood in the shower. Nothing I was wearing was water resistant or repellant.
S.M. I wasn't inside on the elliptical.
S.M. or D.M. I had a certain amount of mileage I wanted to get in so I rode some of my route again but I didn't go as far on the dirt road.
(smart to stay off the dirt, dumb to keep riding esp. repeating- if anyone was watching they probably thought I was  nuts)
(I don't really think this was dumb. As I said I was having a blast.)
D.M. My bike wasn't shifting well by the time I got home and sounded noisy.
D.M. I didn't clean it.
D.M. It was really getting dark as I was riding.
S.M. Before I left I attached both the front and rear blinking lights and used them for the whole ride.
S.M. I got my workout in even though it was an extremely busy day!
More Smart Moves Unrelated to the Bike Ride
Before I rode one of the errands I did was go to the library to get more books. 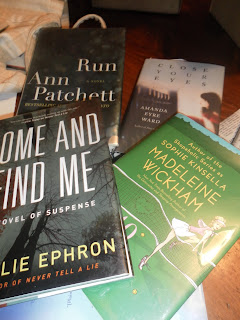 While on the way I there I stopped at Otter Creek Brewery to get some more pumpkin beer. 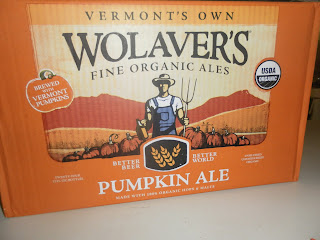 Love the picture of you riding your bike in the rain as people passing think you're crazy. :) I always carry a ziploc baggie with me in case of rain to protect my poor, shattered iPhone. Good job getting your miles in outside while you still can!

Ha, I'll bet you got some stares ... but undoubtedly not even close to when you ran with your bike helmet!!! That's still my favorite "FM" (funny move) Getting caught in the rain is never fun, but it sounds like you made the best of it!

it is sooo exciting to me to know someone else still goes to the library!!

Ahh rain runs and rides, well they are interesting and make you seem so hard core

I think I should buy stock in ziplock. I have a leaky water bottle because I put a camelbak lid on an amphipod bottle...ziplock saves the day every time!

Well....at least you got in a great ride and workout....and some pumpkin ale and library books! Sounds like a nice, relaxing evening! :)

whew! just glad you didn't drop & break / get water damage to your phone like i (cough) may have done once or twice already...

your post made me smile! i loved reading you smart moves and dumb moves.

well done on the wet ride! good thing your phone and camera were okay.

I've got another iPhone app suggestion for you - a weather radar. Never listen to husbands or meteorologists again!

When it comes to the weather forecast, you simply cannot trust a husband... Glad you enjoyed it!

Well of course this is your husbands fault!

The weather radar app is the bomb! Get it now!
Way to get the workout in. I think I'd do the same just to avoid the elliptical.

Riding in the rain can be fun!

I want some pumpkin ale! I better go find some!

Riding in the rain is like being a little kid again!!! You never said if the new phone survived.... Glad you had fun, even in the crummy weather!

Well, all of those moves may not have been the smartest but the important thing is YOU HAD A GREAT TIME!

I loathe cleaning my bike, so I was cringing with every word of this post! But let me say the biggest SM of all was that pumpkin ale!

I never think to put my phone in a baggie...I think my luck may be running out so in it goes.
I feel totally hardcore when I run in the rain.

This post is HILARIOUS!!! Most of my moves today were "DM's." HAHA!

I haven't had Pumpkin Ale yet....I must do this soon. PLUS the beer you have says "Vermont's Best" Anything Vermont does is genius.

xo
Sarah
Get Up & Go