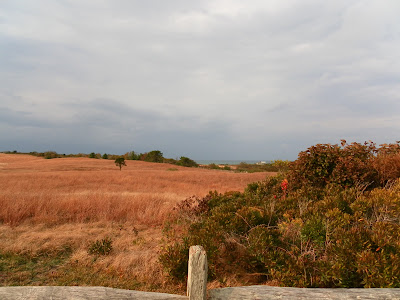 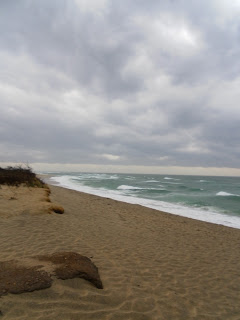 At my turn around!
Nantucket is gorgeous but cold  and windy.  We battled traffic and highway accidents to catch the 9:15 ferry after leaving home at 3 a.m. In the end we did not make it so we took the high speed ferry only arriving one hour later than originally planned.  Our  friend met us and whisked us off to a brown bag lunch at the whaling museum. Then we explored the downtown before coming back to her house.  Eventually I decided to go for a bike ride.  Many many mistakes were made. She had told me the bikes here were clunkers.  When I found I could not shift the bike I was riding I thought that was just how it was. (Mistake#1)I was riding a bike path out to Madaket. It was slightly farther than 5 miles I believed. It was threatening rain. I had brought a book in the bike basket to read when I got there.(Mistake #2). I had not worn my raincoat or new rain pants which I had brought to Nantucket with me. (Mistake # 3 and the biggest one). About two miles into the ride it started to sprinkle.  I did not turn back.  (Mistake #4-maybe)  I continued and rode the entire way even as I passed 5 miles, even as it began to rain quite hard, even though I couldn’t shift.  I stopped briefly to admire the rough seas once I got there.  Once I turned around yet another piece of bad luck.  I got a flat tire.  So I am now riding in the rain and wind soaking wet with a flat tire and I have more than 5 miles to go.  The one smart thing I did was to throw a baggie into my waist pack  I could put my camera and phone into.  I survived just fine and will look upon it as another adventure. 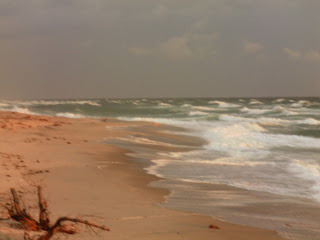 The beach at  Madaket again at sunset 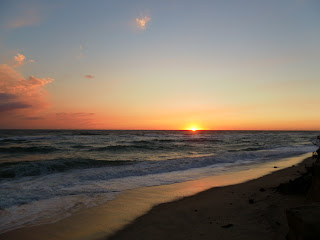 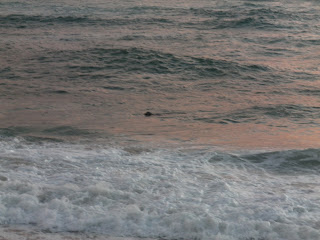 There were seals playing in the water
Friday I did not ride.  It was tremendously windy and cold. I went for two long walks, took a nap, read, and enjoyed being here with friends. 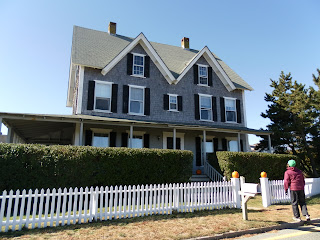 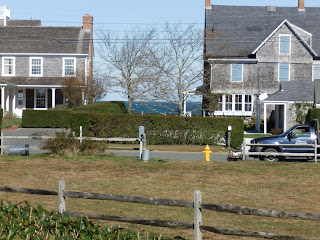 I can see the ocean from "my" house! 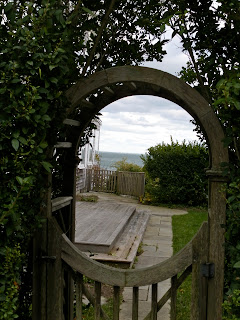 On our afternoon walk - 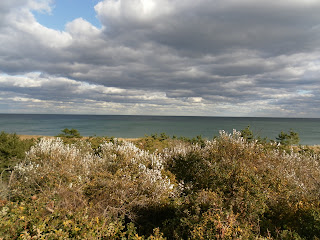 -walking in front of all the houses
Posted by ajh at 11:07 PM

Once again, another post card. Amazing pictures. Glad you made it back alive :-)

Breathtaking photos. I think that sometimes a little suffering leads to a great adventure.

Good thing you brought a baggie! If not, we might not be enjoying these photos! The last two are my favorites - the gate and the clouds over the ocean.

Wow! That's is lovely! Glad you are having fun!

That is a cool adventure even if a bit wet.
Beautiful photography. Enjoy the rest of your stay. Hope the weather cooperates.

Wow, it looks just like I pictured from the books! Enjoy!

Wonderful pictures (as usual). What a trooper you are, riding five miles in the rain with a flat tire!!

YOu always get such amazing pics on your adventures :) ...glad your bike ride caused no major damage!

Yikes, that was truly an adventure, glad all was ok in the end! Your friend is very blessed, what a gorgeous house with amazing views - so wish I were there right now. Enjoy the rest of your trip, and hope your heel is happy on vacation!

My husband and I were there about a year ago to celebrate an anniversary. It is so beautiful and I ran on that very path every day! You are a trooper to stick it out like that!

Beautiful sunset! Sounds as though you're having a great time!

What a fantastic place! Beautiful! Have a wonderful time there!

OMG! I am in heaven just looking at all of your wonderful pictures! Gorgeous!

Sorry about all of the mistakes...now you will always remember this special trip and exciting bike ride:) I am glad that you are enjoying yourself!

Fabulous photos! Sunrise/sunset at the water is hard to beat. (Could do without the cold references - sensitive subject at this time of year...) Looks like a fun trip - enjoy!!!

those photos are right out of martha stewart living! so jealous. so glad you're enjoying your trip!

wow seriously...now I totally want to take a trip there!!!

omg! tell her she needs to adopt me asap! adorable house, awesome views!!

Wow- you are riding in the most beautiful places! How inspirational!

It looks so beautiful...

I think I now want to live in Nantucket!