Another Wonderful Day on Nantucket 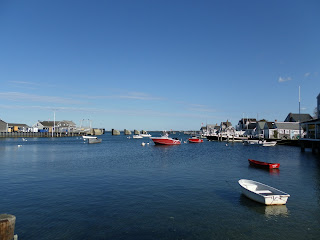 Saturday on  Nantucket was still windy and cold.  We were going to the Downy Flake for breakfast. (If you're in Nantucket make this a stop.)  My friend’s daughter and I rode bikes, the others went in the car. After breakfast we continued to a farm to hear a talk on beets.  The others said it was fascinating but I sat downstairs and read my book!  Then we went to Madeket  Mall (the dump). We all drove there.  A and I left the bikes at the farm.  I didn’t get anything.  Like the beets it just  wasn’t my thing – although it is ever written about  in Elin Hilderbrande’s books as a place to “shop.” 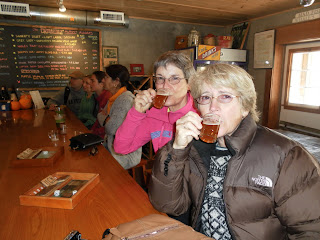 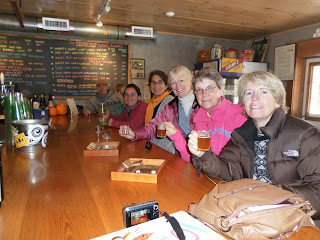 Then before we got back to the farm we stopped at Cisco Brewery.  I proceeded to sample 10 beers – way past my normal amount particularly at noon.  I may have never even considered this in the past but I read so much about beer on MCM Mama’s blog and Jamoosh’s that I wanted to give it a try.  There were definitely some I didn’t like. I don’t seem to be a dark ale person.  My favorite was the seasonal pumpkin - but they didn't have any for sale except in a growler. Never heard the word before so I guess this excursion expanded my vocabulary! 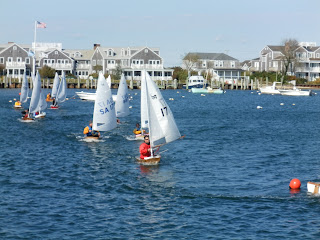 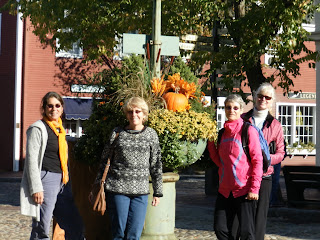 Downtown
Then it was back to the bikes and time to ride to the harbor (after 10 beer samples??? but at least I wasn’t cold anymore!)  We watched a sailboat race which consisted of sailboats that had to be made out of  1 sheet of plywood!  Any one sailing in a small boat in these temperatures deserved a prize.

Then a great cheap lunch and a bike ride home!

Once we figured out what time we needed to leave tomorrow I decided to jump on the bike one more time to take the bike path I took the first day.  One person came with me.  It was  a great ride in spite of the wind.  Compared to the first day when I basically rode with no gears but one very low one and a flat tire I felt like I had a motor on my bike!  Coming to the ocean at the end of the path is such a reward!  We watched some seals surfing  and then headed back. 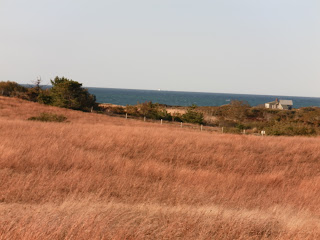 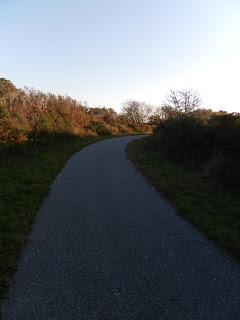 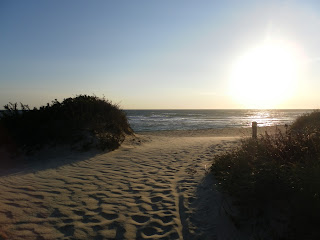 I feel like I'm there with you, your pictures paint a thousand words! Not envious of that down North Face jacket your friend is wearing though but other than that it looks like heaven! Safe travels tomorrow!!

Looks like you're having a great time there. Beautiful pics!

Absolutley gorgeous....those are the words that popped into my head when I look at your pictures! I love the pictures of the water and the beach! I will have to do a brewery tour and tasting sometime too:) Take care!

A great time in a beautiful place with lovely people. What more can you want? Fantastic!

Was at least the book you were reading about beets? :)
Isn't drinking beer the same as carboloading? Biking after 10 beers ought to be a breeze.
Joking aside, as usual, wonderful photos and I am glad you are enjoying your stay there and getting some bike runs in too.

I absolutely love the beach shot!

Love your pictures! I feel like I was there. And I felt some chill bumps on my arms.

Beautiful pics once again...love the reward one :)

Gorgeous pictures - what a great getaway!

These pictures are amazing! Not sure I would be able to ride the bike after 10 beers, either.

Beer samples, those are my favorite, I love the little tasters.

Lovely pictures, it looks like you had a fun weekend!
I'm not able to stay in NY for more than one more day, I have to get back to the classroom. We are leaving the Thursday before the race so I'll be missing 3 whole days! Ugh, sub plans galore this week!!

Don't know how it works there, but Fall and Windy are synonymous in Colorado. The photos are awesome as always and it would be nice to take a run (or ride) along the water. Not much ocean front riding here though :-)

Have you been managing the cool weather on the bike OK?

OMGosh - those little beer glasses. I must have a set of those. They would look so awesome in the Pita's gynormous hands.

Just beautiful! I'm glad you had a good time.

Remember, you owe me a book report :-)

Thanks for the comment. Yes, it was the Follett book. That guy is so hit or miss. I'm glad you told me. I have not read the Dragon Tatoo books either. Jamoosh recommended them to me. Let me know if you do read it.

Sounds like a great trip. Love the pix, as usual! Have a great week!

That's it ... I am googling Nantucket. I have to add this to my list of "must visit" places!