The Crown Jewel of Addison County

I've discovered the crown jewel of my county. I keep going back to Weybridge,Vt and finding yet more wonderful spots.  Today we did a 20 mile loop - no repeating parts.  First we rode on the soon to be opened new bridge in Middlebury. It felt a little like we were doing something bad!  This bridge gives some new views of Middlebury and is quite nice.  Then we headed past Middlebury College, cutting my 10 mile loop I have done a few times in half. 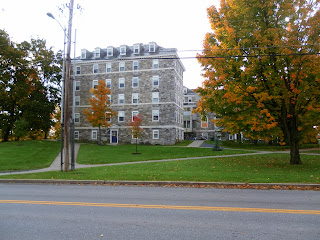 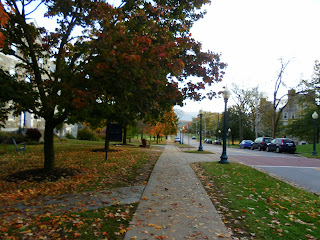 Looking back down the campus
We eventually turned down  into Weybridge on the road I have ridden a lot lately. But when we got to the end of it instead of turning back to Middlebury we kept going.  We took a loop, unsure of which way to go. I had scoped it out by car on Monday (getting lost twice) and didn't think it mattered as we started out going down and came back up huge hills either way. So we went left. (We both thought after that we made the right decision.) 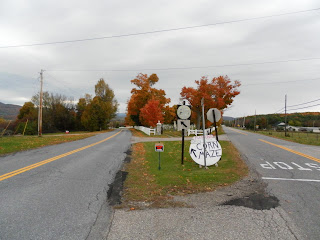 Left or  right?
I took this picture on the way back. It was still sunny when we headed out.  We rode along the most beautiful route imaginable.  The leaves in our town have taken quite a beating from the rain and the higher elevation but they were still plentiful here. We both exclaimed over the beauty several times.  One advantage of biking is you (at least I do) cover so many more miles that you can really take in some sights.  Plus you're (and again I mean me)  not so gosh darn tired!  I am so enjoying all this riding.  I think having the blog has heightened my appreciation for my state too! 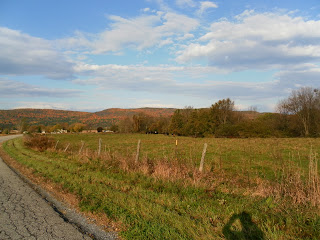 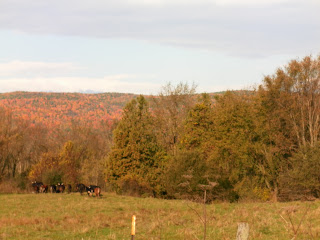 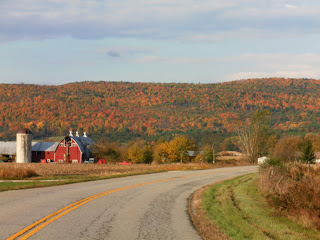 This farm and mountain were just beautiful 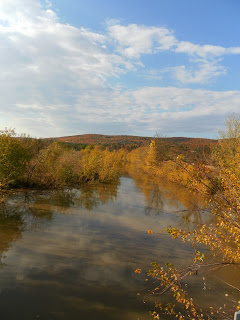 Otter Creek which is actually not attractive at all..... 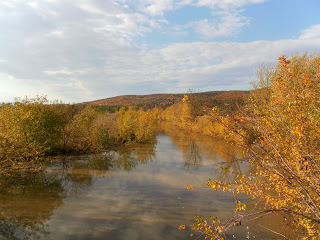 ....but it was today.
We continued on and briefly hit Route 17 before we turned and headed back on a nearby road.  One bonus of this route was how little traffic there was.  It was hilly which we both liked as it wasn't bad.  The sky kept changing.  We didn't have the sun for long before it became all clouded over only to look rather threatening as our ride continued. 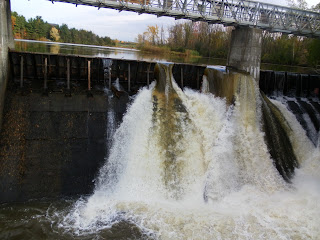 I have only driven by this dam once or twice and it was fun to
see it on the bike. T had never seen it. 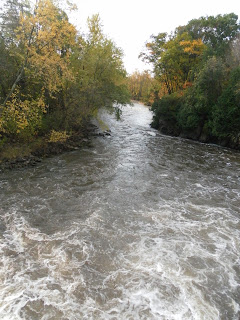 ..From the other side of the bridge 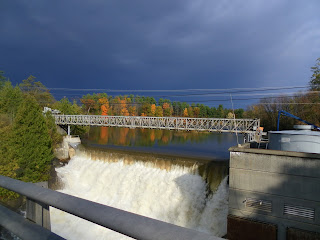 The sky was rather scary looking. 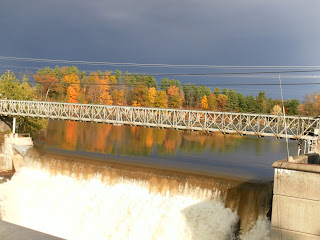 I loved the reflection of the trees in the water. 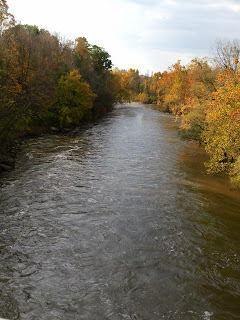 The other side of the next bridge.
Now we started to head up hill but it wasn't as bad as I had thought it would be.  It was long but fairly gradual.  Once we got almost to Middlebury we took a dirt road and added a few miles to our ride.  More beautiful scenes.  It did start raining before we finished but we didn't get too wet.  We ended up riding slightly more than 20 miles -a  good distance.  We both agreed we would love to do this ride again. 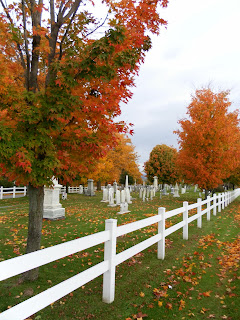 A  cemetery in a lovely location 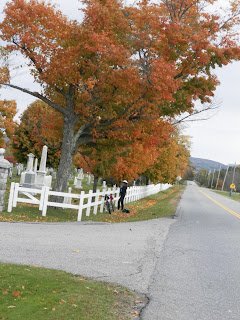 T having a snack before we finished our ride.
Posted by ajh at 9:39 PM

Truly breathtaking views.. makes me want to get out and EXPLORE!

Did you do the corn maze?

I swear, if I didn't know you to being the stand up citizen you are, I would have thought that you went to iStock Photo website and picked a bunch of amazing photos of Vermont. You should go to a local print shop and print some of those 11 x 14 photo paper. BTW, check back on my site as I will have a photo essay of my run yesterday. West Coast style!

These are amazing photos Ajh!!
I'm with Chris.
That cemetery photo is breathtaking. Incredible.
Absolutely incredible.

Stunning. Keep rubbing it in, please. Mary and I will have to take Ian back East in the fall next year. So far it's only been in the Summer...

Gorgeous pictures! The colors of the leaves are beautiful. The contrast of the white headstones and fence to the leaves and grass of the cemetary picture is amazing. You live in a very beautiful part of the country.

I love the fall. Even though you're not running, at least your bike rides are gorgeous and you're enjoying the season! Maybe you're faking the injury and have turned into a cycler now! Could it be? ;) Beautiful pics!

Such colorful landscapes and dramatic waters ... makes me pine for New England. You are so lucky to live in VT this time of year.

I know everyone thanks you for these pictures but truly, THANK you, they are the amazing sites of fall that we just don't have here and I love each and every one of them! Thanks so much!

That is beautiful! You must have had a great time out there.

Love it, love it, love it.
Biking is so much fun (if you don't have to compete with cars for the road that is).
Fall in north east is the best. Thanks for sharing.

"I think having the blog has heightened my appreciation for my state too!" Are you saying that all my photos of cracked sidewalks and scraggly trees aren't beautiful?? LOL!! Your blog makes me appreciate your state, too - what a gorgeous ride!

It might sound strange ... but that cemetery is really, really pretty!

I think hub has to face a confrontation tonight to talk about emigrating to where you live :)

It's so damn beautiful there, what a privelige to live there.

If I was able to bike around in your area I would have a huge smile plastered on my face the entire ride! I love the pictures...especially the one of the red barn:) It reminds me of my childhood living on a farm in the country.

I love that cemetery (can't believe I just said that) it is beautiful!

What a gorgeous place for a bike ride.

Now that is a great photo journal entry, nice blog!

I can't look at your blog, girlie..I keep wanting to run a marathon in the fall there! OMG, those pictures are beautiful!!!!!

Did you read Chris K's blog from back in July when he had a stress fracture in his heel? YIKES! Also, someone commented on my blog yesterday about trying heel seats. Every try those? They are for PF.

Seriously, you need to start printing up these pics! They are just beautiful! You do an amazing job capturing it all! I see a nice little hobby for you when you retire!
Love all the ridding you're doing - glad this little injury isn't keeping you inside!