Yes, it was a 93 mile week but of course it was on the bike not running!  But I am still pleased and impressed with myself!   I am sure that is the most I have ever ridden in a week. It is partly due to the commuting which I plan to do some more of this coming week.  Right now I am not sure why I am paying for a gym membership because I am never there! 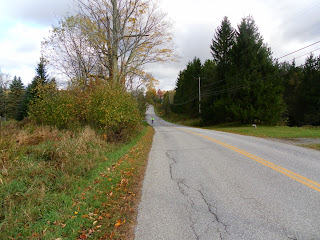 Riding near home on Saturday 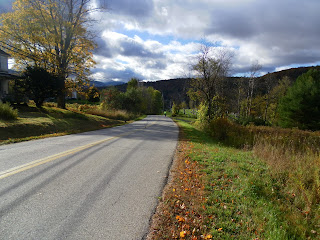 Good not great bike ride on Saturday.  Is that the first time I've said that?  I was WAY TOO COLD!  I think I have ridden in colder temps but warmed up quicker. Today we headed down the mountain and across the one flat section which was cold.  I stopped to warm up my hands then we headed up the mountain. I was thinking I needed to remove a layer but I didn't stop to do it. I probably should have because I sweated and that may have been my biggest problem.  Eventually we turned and were on the top arc of our loop.  This is a more gradual uphill until it becomes a rather steep downhill!  I was already cold as the sun had completely disappeared behind many clouds.  Going downhill rapidly only made it worse.  Most of the remaining ride was this way.  I felt cold in general but particularly my toes and fingers.  Once home it took some time to warm up.

Tomorrow we are going to go for our ride somewhat later to avoid the worst of the very early morning chill.  I have already picked Steve's brain at Happy Trails for dressing in colder weathers.  He answered quickly with many suggestions!  I have De Feet Blaze socks in my shopping cart to order tomorrow to begin to correct the problem.  How much late fall/winter riding will I really do?  Not sure.  I can't break the bank getting outfitted but hands and feet seem like a good place to start!

Today - Sunday -we rode 32 miles on the Rail Trail. I thought it would be easy because it was fairly flat but I was exhausted and glad we did not go farther. The whole trail is 52 miles round trip but we did not have that kind of time.  The sun kept hiding behind clouds but was fully out on the way home so the drive was gorgeous!  It was cool on the ride but not too cold. I especially liked the views of the river and when it was more open. T liked it when the trail was covered with leaves and the trees formed a canopy overhead. We both liked it but felt no need to go back on a regular basis.  I am not sure I liked the flatness of it and the similarity of the landscape.  I had a hard time putting into words what disappointed me.  Perhaps my expectations of this trail were too high.  My beloved Burlington bike path is flat but I couldn't be happier than when I ride/run on that.  Here are some pics from the day. 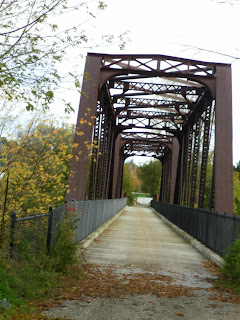 An old railroad bridge - loved it! 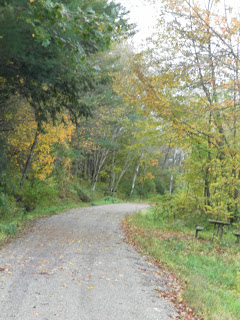 Looking back from the bridge 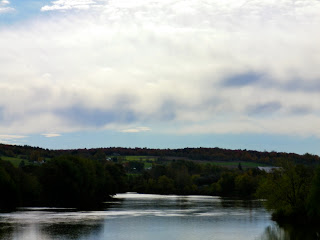 Looking at the river from the bridge 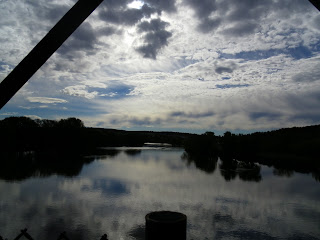 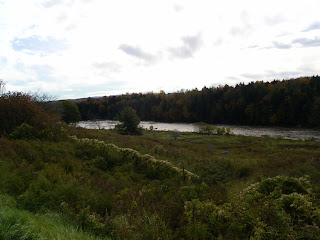 Looking at the river later on the trail 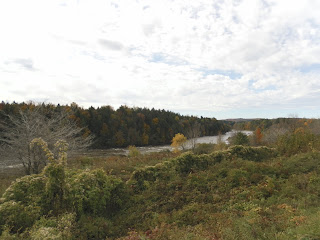 The river in the valley 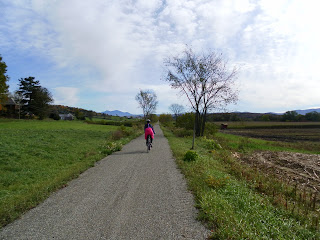 Riding North on the trail where it was more open 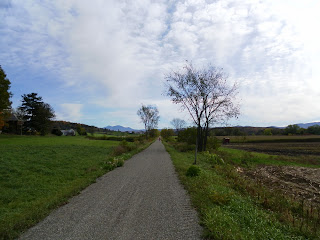 Riding north - I'm the speck in the distance
Posted by ajh at 7:03 PM

Such pretty pictures. I particularly like the 2nd one and the one of the bridge. Awesome on riding 93 miles!
And I hope you have good luck keeping those fingers and toes warm.

This is great you could find something you love for when you can't run.
I would keep that gym membership for winter months.
Keep warm and congrats on 93!

Beautiful photos! It looks cold, though - brrrr!
You could try to find a wind proof/resistant fleece vest - one of my faves for winter running/riding - keeps my core warm and lets my arms vent a bit. Also, I forgot - a cheap tip we got years ago - try wrapping your wool sock clad forefoot in a couple layers of newspaper and then put the plastic baggie over it - crazy as it sounds, newspaper has some insulating/wind resistant value! :-)
K

Wow! Congrats on such a high-mileage week. Well done and beautiful pictures!

One nice thing about biking is that it's easier to carry items with you, like a camera. Faves: pics 2 & 3.

That's awesome mileage for the week! Great pics! I love the one from the bridge...the clouds are amazing. Let us know what keeps you warm on the bike...one of the most uncomfortable things is getting cold and staying that way.

I just drool over your autumn pictures - they are breathtaking! Enjoy these days before the onset of that nasty white stuff, then you can use your gym membership, but for now enjoy the trails!

Great distance on the bike, well done! This will all help a lot when you start running again. Those pictures are beautiful. Have a great week!

It's so beautiful, the bridge reminds me of "Bridges of Madison Country". Great job on getting those miles in this week.

I know what you mean about your gym membership: I should definitely go more often but I'm sure I will during winter.

Amazing mileage...even on the bike. You're doing a great job keeping up your cardio and staying fit, until you can run again. Yeah, it's getting a little chilly...I'll have to figure all that out too!

93 miles is incredible! Good for you!

this was such a gorgeous weekend, congrats on the 93!!!

Very impressed! And again, your pics make me want to move there! Then I remember, it snows! Hahahaha! Have a good week!

93 miles on the bike is awesome!

You always get such great photos!

Nice job on your high mileage week! That's a TON of miles to ride on the bike!

Another good winter riding idea is a wind proof jacket that has arms that you can zip on/off. Perfect for those cool days!

Looks like you sure have some great places to ride.

To answer your questions from the other day ... yes, I live near-ish to Vancouver. It's a bit of a drive, but fairly close. If you are ever out visiting your friend who lives near Grouse Mtn let me know and we'll climb it.

Gorgeous bridge pictures and nice job on your biking mileage!
Thanks for filling me in on your class.
We finish up this week and then we have a two week break(sorry, I hate saying this to other teachers who aren't in our district). I'm going to clean the house, sleep and taper. A perfect break :) !

Great job on the mileage! And thanks for the encouragement on my blog--I appreciate it!

Has anyone told you that those pictures are amazing? :-) Well, they are. Nice week.

OMG! I miss our leaves...they are all gone:( Great pictures!