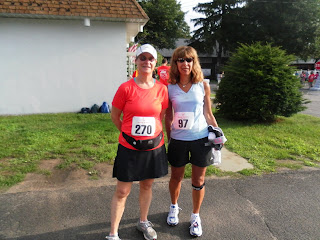 Darlene and me before the race

It is easily the most humid day we have had in awhile!  But I got up and raced so hurrah for me!

I was up before 4 and on the road by 5.  I had to drive slightly more than 2 hours but I am okay with a road trip to race and meet a new friend!  I know the way well from the years my kids were on the swim team and we had many many meets at RPI.  However there was a detour and in the thick fog it did throw me for a bit.  I did fine until I got to Saratoga and missed the turn for the race.  Once I realized it and found my way back I turned to the right where many cars were going.  It made sense to me that these cars would be going to the race. Well they were BUT they were going to the HORSE races.  The very nice man directing traffic, held traffic up for me to back up, turn around and cross to the left where I should have gone in the first place. If only all people parking cars were so sweet.

It took me awhile to park my car, get my number and chip and find Darlene.  I barely had time for a port a pottie stop before the race started.  I prefer to enter a race a little more relaxed but oh well.  Darlene and I found a spot somewhat near the front and the race started.

Like I said when I started the post, MAN IT WAS HOT!  I had been told this was a flat course though and I wanted to do well.  It was only 3.1 miles compared to the 8 I ran last weekend.  Trouble is there doesn't seem to be any easy distance.  My first mile was 8:19.  Alright!  That gave me some wiggle room .  I was trying to do the same thing I did last weekend where I consciously picked  up the pace and continued at that pace as I counted breaths slowly to 100.  I really feel like this helps and want to keep trying it. I can settle into a pace pretty easily and be content. This forces me to pick it up for at least awhile.  The second mile seemed really long and I couldn't believe we hadn't come to the mile marker yet. There was still a crowd of people around me, it never thinned out too much.  My second and third miles were 8:42. Again, I was fine with this.  I tried to push it for the final tenth. I could see that the clock was on 26 and I wanted to keep it there so I picked it up.  My pace was 7:31. Oh if I could only see that for farther than a tenth!! I ended up at 26:43 which was better than any other 5K I have done in 2010! My overall pace was 8:36 which I am thrilled with.  I felt beet beet red when I finished!  I looked around for Darlene but missed her coming in. 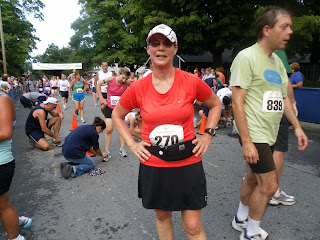 I'm done and exceedingly hot!!!
We finally met up, via cell phones!   We hung around watching the horses practice on the practice track.  We chatted about racing and wishing we had more friends to run with and race with. Darlene just started running two years ago!!  I loved meeting her and am sure I will be racing with her again!

Watching the horses on the track 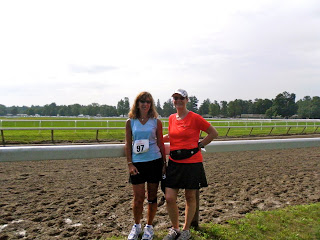 Great job on the race and getting through the heat!

Wow!! That's a great pace and a great race, congratulations!!

I'm in awe at your pace in that heat ...so glad to have met you in the flesh...hope to see you again!!

wow, Congrats on your AMAZING time!!
And you ran in this crazy heat!!

Congrats on a fantastic 5K finish! You ended up with an awesome time and pace:) How fun to meet up with a blogger friend too:)

Nice job, Ajh!! You certainly LOOK like it was humid, I can only imagine how it must have felt. And you are getting your great share of blogger friend meet-ups - yay!!! That's great you 2010 PR'd - in that heat/humidity that's amazing!

Great job on the 5K! I ran one in the heat here tonight and was MUCH slower than that.

Way to beat the heat!

Congrats on a great race. That heat was horrendous! The funny thing about that parking lot (and I drive in the wrong driveway EVERY year including this one!) is that they are connected. You could enter at either end, but they want you to drive in the correct entrance. Silly!

Congrats! You are awesome and speedy!! Especially in this crazy heat...

Great job on a very hot day! Hope you are relaxing now and have a great week!

Way to go! You did such a nice job. I'll bet it was fun to watch the horses afterward, too.

This is so funny. I read the title of your blog and thought: hey I've just read about that same 5K. It seems you have a blogger living in your area, I've been reading her for a about a year now and she did the same race as you yesterday. Check this out:

Well done on the race!

Another successful race girl! You rock!!

Great job! It was hot! You are not going to believe this, but that is my husband in the green shirt next to you at the finish line!!

Congrats on your race. It was hot yesterday! Sorry I couldn't head up to Saratoga to meet you, I work on Sat mornings.

To answer your question, I'm getting ready for the Mohawk-Hudson River Half Marathon on 10/10/10. I ran it last year as my first half and I can't wait to run it again.

You're totally right. There is NO easy race distance. 5k, 10k, half - they all hurt if you're racing them. Good job on the race. Great time!

Great job! Imagine how much nicer it will be when this terrible heat goes away. What treats for you to meet up with a blogger buddy and to see the horses after your race. Have a great week!

You are amazing! That's SUCH a great time!

I thought the guy next to you looked familiar but I thought: no that can't be. That would be too much :) but it's him.

You are THE racing machine!!! What an awesome job and in the yucko humidity, too. I don't know how you do it. It was 40% humidity here a few days and we thought we were going to suffocate!
Liking the fact that you are sporting your lovely skirt!
K

Ha ha - that is too funny that Lori's husband is in your picture! The world is truly small, isn't it?
And thanks for the well wishes for my dad - so far so good...

Nice pace and placing, wow!! All that heat and sweat was TOTALLY worth it, good job!

Congrats on getting a 5K 2010 PR! I don't know how you did that on a hot summer day. Like your running skirt!