Bling - love it or hate it

Marlene had a fun post showing her bling and suggested we reciprocate!  I love my bling and am happy to oblige!  Generally my most recent medal or two hang on the fridge hidden amongst all the other junk!  The rest of my medals are in a box tucked away with other running stuff I want to keep. 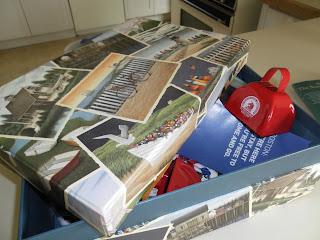 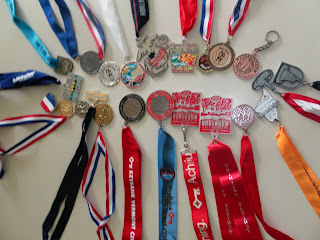 I counted my medals and if I counted right there are 23.  Some are finisher medals and some are prizes for age group wins.  (When you get older it is a bit easier to get there hence: Age Groups Rock).
I do have a "trophy table" that I have a few awards on.  It seems to be getting cluttered with other stuff lately. Surprisingly two of these are from marathons but that is because they were small marathons. The picture is from the Maine marathon last year which was my worst marathon ever.  It is the one I need to redeem although I am doing very  poorly picking out the marathon I want to do. 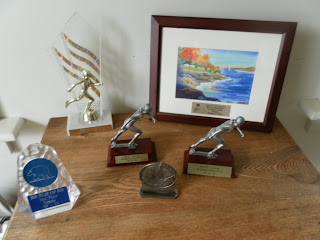 Okay now for a few of my favorite medals: 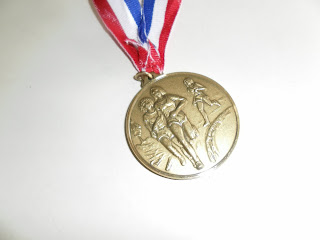 This medal doesn't look like much but it is a medal from the first race I ran.  Before that I walked in races and did rather well!  But.........I am very competitive and there are not many races around that have a walking component. Plus there were more opportunities for cheating (people would run in parts even though it was a WALKING race and it drove me nuts).  When I got to this race, a local 4 Miler there was a walking fun component but it wasn't timed.  That was not fun to me so on the spur of the moment I decided to run as I had entered as a runner so I would be timed.  I had NEVER.RUN.EVEN.ONE.MILE.BEFORE.THIS.RACE.  So I ran the entire four miles and ended up third in my age group. I was pretty impressed with myself but quickly realized that was a fluke. But I found out I could run and quickly went on to enter more races as a RUNNER!! 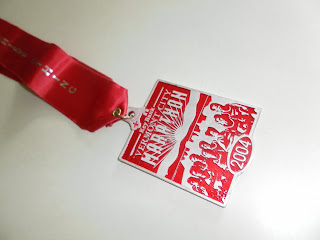 This medal is from my first marathon -enough said! 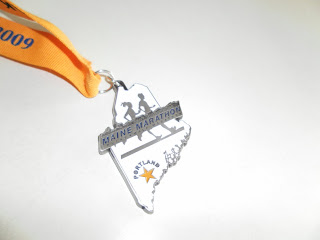 This is from my fifth marathon - I love that the medal is the shape of the state. Yes, I belong to my local Geek Club. 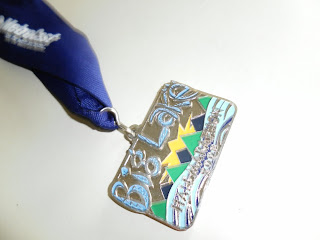 This medal I like for a couple reasons. I love it because of it's colors and looks. Plus it is from my best half marathon.  It was in New Hampshire and I ran it in 2:00:55.  I have not hit that close to 2 hours again.
So there are my medals.  Thanks, Marlene, for the opportunity to get them out and play with them. They are usually put away in the box. No one really cares to see them but  if I have raced  during the school year I take my medal as I earn it into school to show my students as they do love to see them.  I hope I am inspiring some of them to someday race and earn their own medals!
Posted by ajh at 1:19 PM

These posts are awesome!

I think I need more before I can blog about it --- 6 doesn't seem like enough. Look at all your medals!!!! amazing!

I love the story of your first medal. That is awesome and inspiring! Congratulations! You're big Lake medal has me checking into that race.

Awesome looking metals! Love them. Its so cool to hear about when you got them! I can't wait until I have more than 3!

Thanks for the peek into your medal box! You have a great collection.

LOVE your BLING!! thanks for sharing.
The box you keep your running stuff is really nice, I should really do that.
Can't wait until I have more then 2 medals.

Those medals deserve better than a box. They should be on display for the rest of the world to see and to remind yourself of how awesome you are.

I have BIG plans for all my bling now that we are going to have a house I'll have room to hang them.

Those are awesome. At the moment I'm not so in love with bling. I have only 1 medal to my credit (they don't seem to give many around these parts, unless you're doing at least a half). That one lonely medal has bad memories associated with it, plus since I can't currently afford to enter races, it makes me sad and wondering if I will ever be able to get more. I have it hanging by my treadmill (as inspiration) but right now it just leaves me with bad feelings and I've been thinking of putting it away. Sorry for the downer comment :(

Thanks for showing us your bling - love the stories behind them!

Wow! 23 medals?!? Amazing! Age groups really do rock :) Too bad I'm currently in a popular one and won't be earning too many of those any time soon. But who knows...

Nice bling!! You really have a great collection there! I don't have many medals (yet) but should get a box like you have to keep all my race stuff I just can't get myself to throw out. Great idea!

Wow, great stash of bling! I have a while to go before I'll be good enough to get my first medal. I haven't ran any races yet but my first one will be on September 6th. It's a benefit to raise money for a local organization that treats emotionally and behaviorally troubled girls. I don't know if there will be bling, but it's for a great cause.

So fun! Loved the bling. My little girls pull mine out every once in awhile for dress-up time. They make great necklaces over princess costumes! Unfortunately a few never made it back to my collection. At least they went to good use! :)

Love it! I keep medals in a box my mom had made for me...each year, I keep the new ones out on display and put the past ones in the box! I also have every race number I have had too...on the back I put my times.

Bling is Awesome! For me my kids think so too, so as soon as I walk in the door with a new medal, it immediately goes around their necks and stay until it has fallen off the ribbon and at that point I just have to hope the medal itself is somewhere to be found! =)

Thanks so much for playing along - I loved having a little peak at your treasures.

What a great story behind the medal of the first race you ran. That's incredible!