Here is this week's question from Jill at Finishing is Winning.

Question: Who are your Top 5 favorite athletes? And why?  They can be famous or infamous, dead or alive, to do with your sport or be in a completely different sport.


Some of my choices are going to age me for sure!

1.  Arnold Palmer is probably the first athlete I was aware of. My father was a huge golfer and we watched golf on tv frequently.  We went to some tournaments and one time at the Canadian Open I followed Arnold Palmer for all 18 holes. I was part of Arnie's Army. He was a true gentlemen and truly appreciated all his fans.  THe best part was while I was following him  WE HAD EYE CONTACT!  I have never had any desire to golf but I still watch it on tv and often read golf biographies or other books especially those written by John Feinstein.  Caddy for Life - the John Edwards story is one of my top books ever. 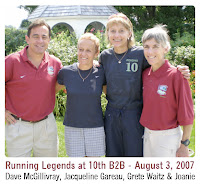 2. Joan Benoit Samuelson is an athlete I admire greatly.  I remember when she won the gold in the marathon!  I have raced with her at the Freihophers 5K in Albany (what besides running can you be in the same event as elite athletes) and taken part in the Beach to Beacon 10K in Maine that she organizes.  She lives her life simply while continuing to run and race and is a person to be admired!

3.  Lance Armstrong - I have never been interested in biking but Lance Armstrong fascinated me in the years he raced in all the Tour de Frances.  I followed his progress closely and read books and magazines about him.  I will be anxious to see what he is able to do this year.

4. Michael Phelps - I have followed swimming in the Olympics for years since my children were swimmers on the local swim team.  Michael Phelps has been a lot of fun to watch. 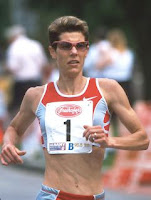 5. Marla Runyan is a legally blind runner who has raced several distances.  When I was first racing she was also in the Freihophers 5K that Joan Benoit Samuelson was in. Marla  Runyan won it.  I had just finished her autobiography shortly before the race.  When my daughter came to tell me she was up front I left my place and went up front to see her not caring if I  missed the start.  Later in the race the slower runners (me) met the leader. I stopped to see MR before I continued.  Neither of these things are typical of me as I always want the best time I possibly can get but I so admired this woman and wanted to cheer for her. She has faded from the racing scene in recent years.


Man I don't see how those of you who typically race in hot climates do it.  It is just beginning to get hot here and I am seriously slow. Yesterday T and I ran 13 miles although I don't know if ran is the right word. Sadly I could say the same thing about my 4 mile run this morning and it is only going to get worse. Oh well, I will soldier on!
Posted by ajh at 10:40 AM

The heat is killer and it is impossible to avoid slowing down. The benefit is that the speed will come back as soon as it cools down.

I never heard of Marla Runyon to be honest...what a great story.

I used to the like Michael Phelps. He lost my respect in so many ways. I think his ego did him in.

Cool post!
Yeah, the heat is killing my workouts too. But I'll keep soldiering on, so I'll be strong when the weather is better.

Soldier on my friend...you can do it! :) The heat is unbelievable here too...

Lance is the man - aside from sport dominance, what he has done through LAF is phenomenal.

Arnold P is a great pick - class is ageless and crosses generational barriers. For a sport where most are born with a silver spoon in their mouths, Arnie and Jack brought the general populace into spectating golf events.

See you in a short bit - Colorado awaits...

It’s amazing, when I started reading all these blogs everyone was posting about the heavy snowfall. Now it’s all about the heat. I’m not good in heat as well.
I like your list of athletes. The first 5 I thought about were all unknown to the world South Africans, except for Bruce Fordyce who is more known. Joan Benoit and Lance Armstrong will be somewhere on my list as well.

This was a great post...thanks for sharing:) I also really like Michael Phelps too!

I know how hard it is to run in the heat! I am the same way and not really sure if I can call what I do running either:) Keep it up!

It has been really HOT here too :( I loved the list of your favorite athletes. That one is a hard one for me! I guess the one that comes to mind right now is Mia Hamm. She was THE soccer star when I was younger :)

wonderful choices, all are deserving of recognition!

It is crazy hot here too, slow down, run in shaded areas or early in the morning. The good news is this heat wave will be leaving us later in the week.

I only know Lance and Michael. Admire Lance a lot for coming back so strong after fighting cancer.

I don't know how others run in hot weather either. I find it very difficult to run when it's hot, I try to go as early in the day as possible on hot days. Afternoon or evening runs are not an option on these days. And I'm slower too when it's hot.

Congrats on your 5 km. Interesting post, glad to see that you didn't include soccer players!

Love Michael Phelps....I ran 3.5 yesterday in this hot soupy weather, had to go home to finish on the treadmill!

ohh that was a pretty good list...but not a single female?? :)

Your list reminded me of some more of my favs - Phelps & Armstrong.