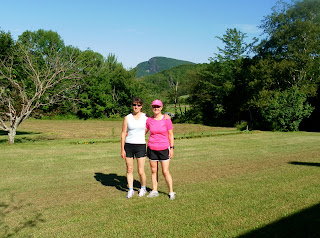 T and myself after the race
I ran our local 5K today.  The weather was pretty perfect as it was at 7:30 well before it got hot.  There were about 100 people including T!  There were lots of grade school kids which was awesome.  I started out too fast and felt not so great right away.  Then I settled into my pace.  A lot of people were passing me at this point.  T chatted a little but I'm not much for talking during a race and she took off. I could see her the whole race but as usual she was out in front. 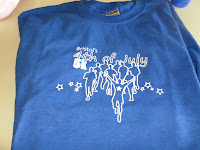 Eventually I started passing a few people myself. The course was fairly flat, certainly no hills of any consequence.  When I started my Garmin had gone to History and I had to scramble to start it. So when I finished I let it continue running for a short time to make up the difference. So I am not 100% positive of my time but it was about 26:51 which was  a PR for this year.  I thought I would get a time at the end but this is a very low key race. When I went to check later they only had times for about each 10th person.  So I was slightly more than half way between 26:00 and 27:11 so I think what I figured was right! 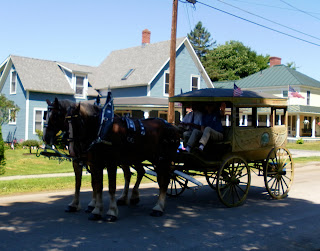 Our neighbor's draft horses in the parade 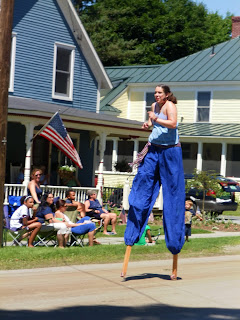 H walks the whole parade route on stilts every year: this spring she
ran Vermont City Marathon  for the first time!

So I hurried home to get back for the parade.  It was slightly more than an hour long. I saw lots of people I hadn't seen in a long time and managed to choke down a fried bread dough before I headed home!
Posted by ajh at 9:31 PM

Hooray for the PR! That's a very cute shirt and I am officially jealous of both your 7:30 start time and the fried bread dough! :-)

Congrats on your PR!!The t-shirt is definitely very cool :)

That's a nice finishing time! Great job at getting over your Garmin not being in the right mode and starting off too fast - just one of those problems would mess me up! Great pic on the shirt!

Great job on the PR!

Perfect day. A pr race, a parade and hopefully a day to spend with family! Enjoy!

Wow a PR in the heat! Great job!

Woohoo on the PR! Very cool. Happy 4th. Will be in touch very soon :).

I love the t-shirt!

Stilts freak me out...I don't know why, they just always have!

congratulations on your PR! Sounds like you had a great 4th and I hope a wonderful family reunion. I love seeing cousins and aunts and uncles I haven't seen in ages - it's familiar and strange at the same time.

Nice run and good time, well done! I like that blue t-shirt. The parade sounds like fun.

Congrats on the 5K! Sounds like a great way to kick off the fourth.