Vacationing on the Cape.

I spent most of my April break biking and running on Cape Cod. It's not everyone's idea to exercise madly while on vacation but it's definitely mine. The rain held off for the most part but it was quite cold and we wore lots of clothes! But if that's what it takes to bike in a beautiful setting so be it. 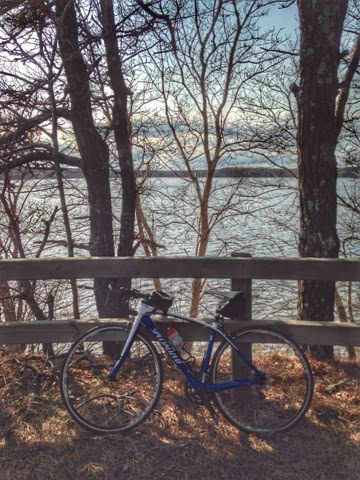 My rides were from 60 to 17 miles with a total of 222 miles. Oddly enough I ran 22 miles. I am not sure what it is with all the 2s. To me this was a great vacation. It could have been warmer but the scenery made up for it.  Riding along or near the ocean is so sweet in my world. A lot of our rides were on bike trails that were not next to the ocean but we often ended up there.  The ocean, beaches, and lighthouses were everywhere! 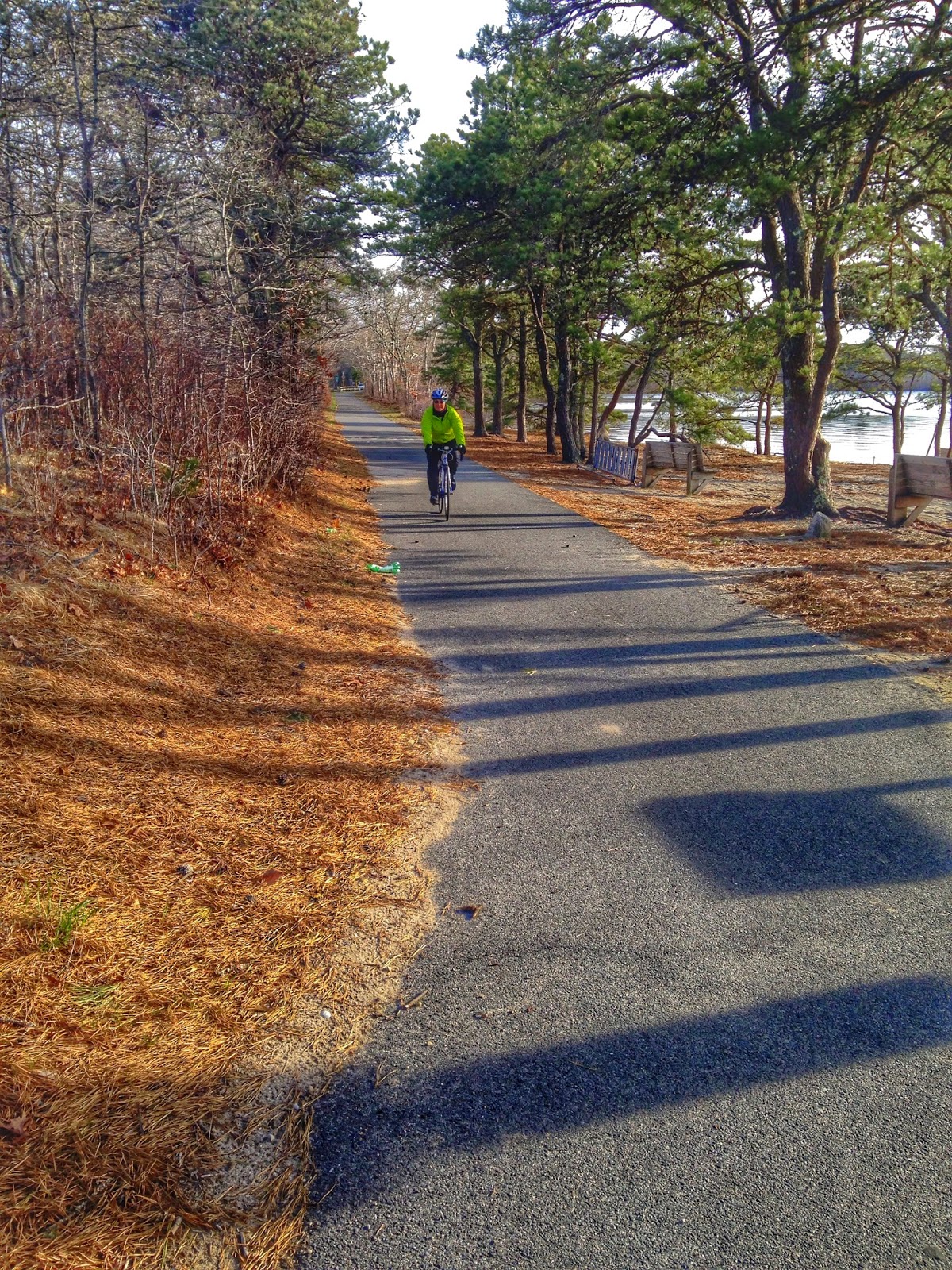 This is the bike trail we rode the most. 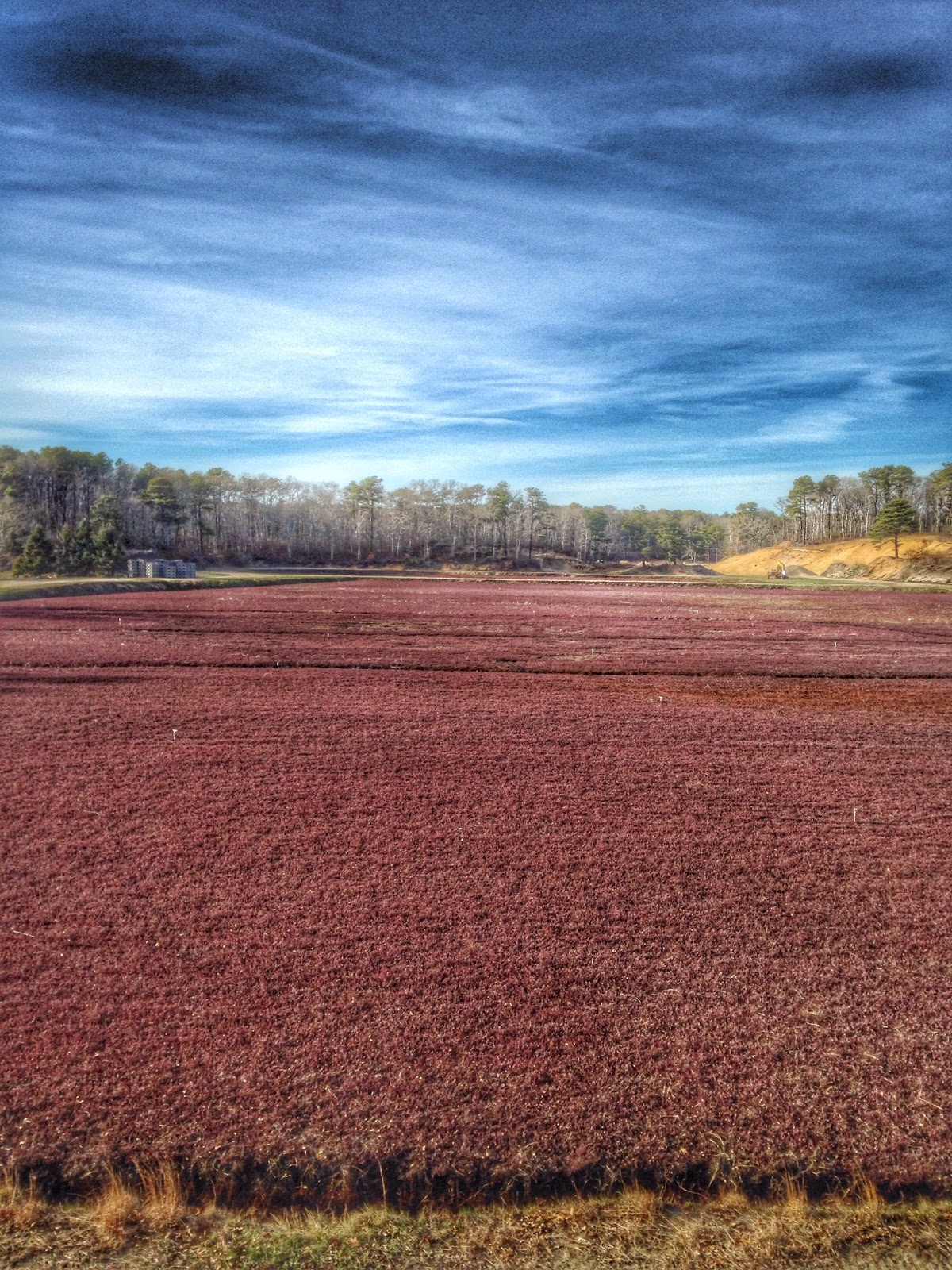 Some of the cranberry bogs. 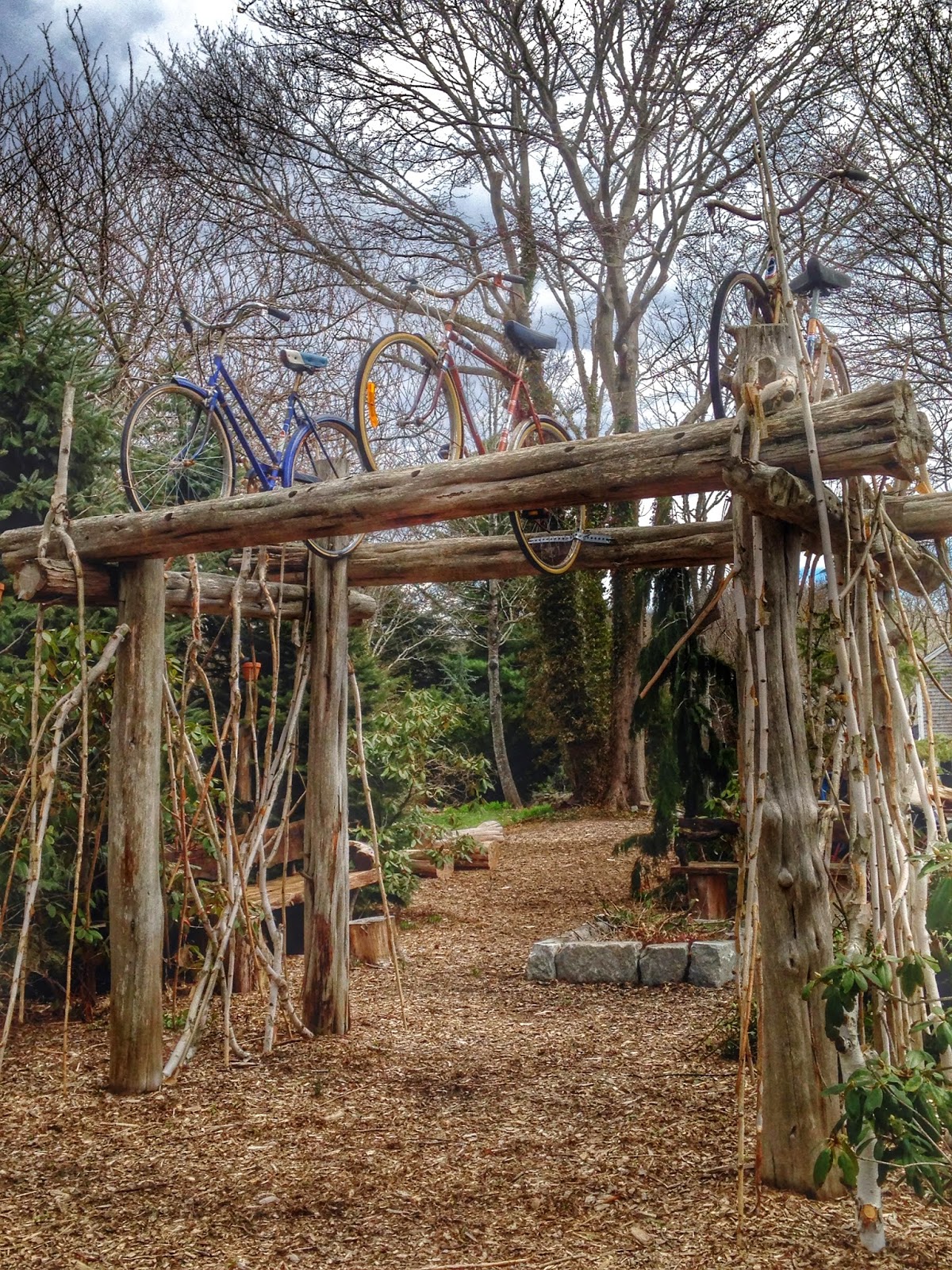 Look at the bikes on top of this trellis. One
of my favorite sites on the Shining Sea
Bike Trail. Some of this trail
went right along the ocean. 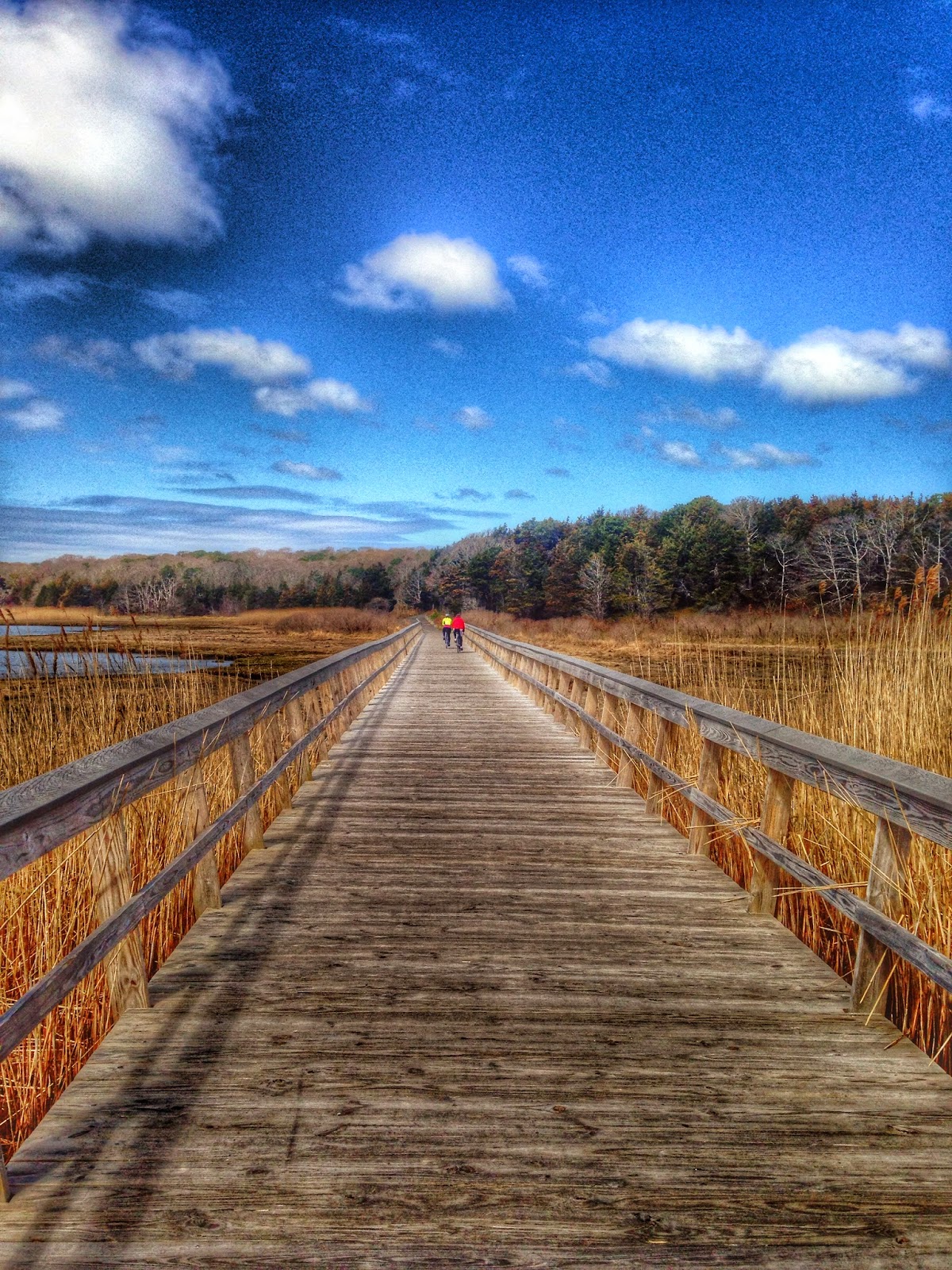 The bike trail coming back from the Coast Guard Beach in Nauset. 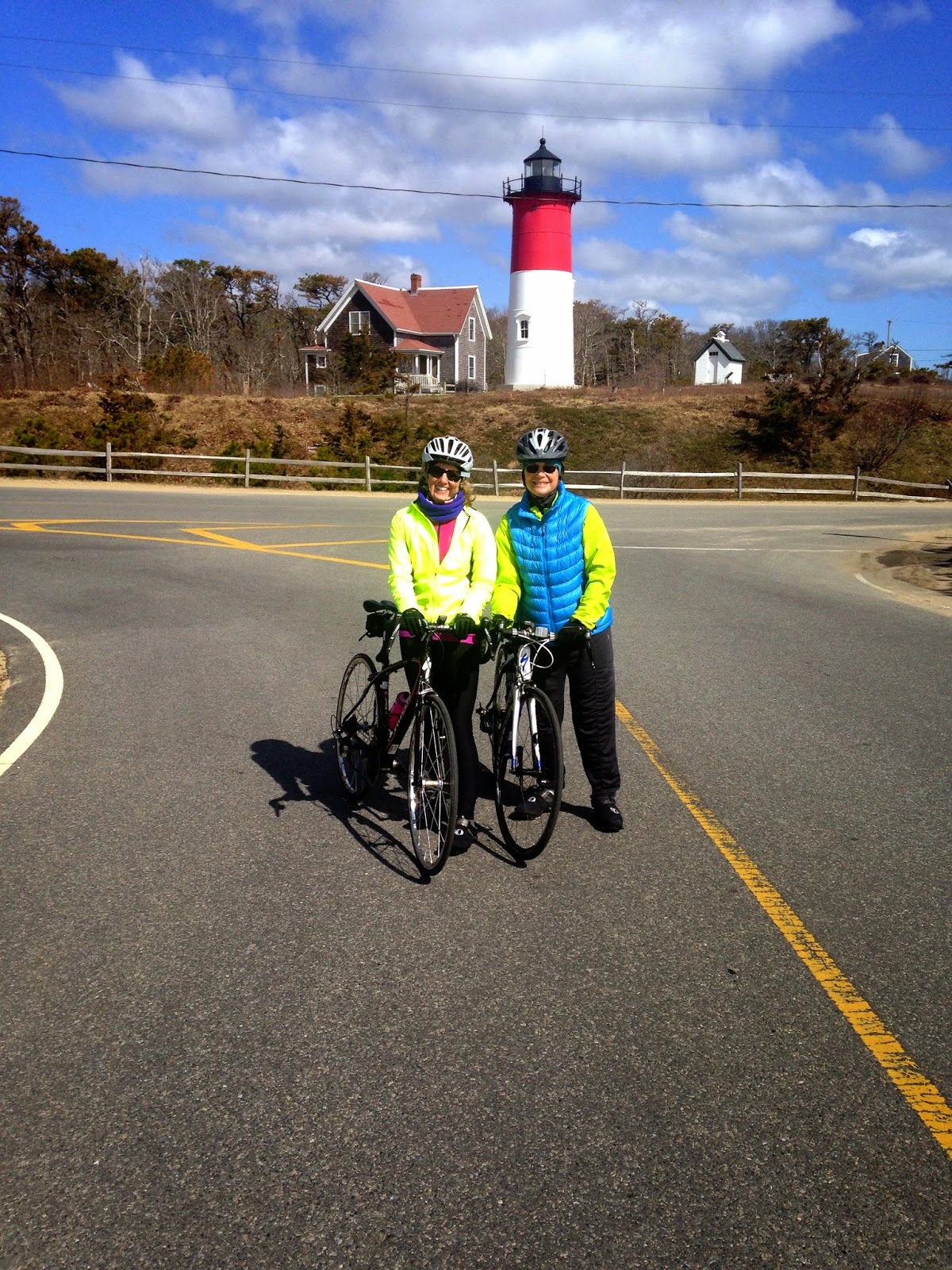 At the Nauset Lighthouse. One of my morning runs on the beach. 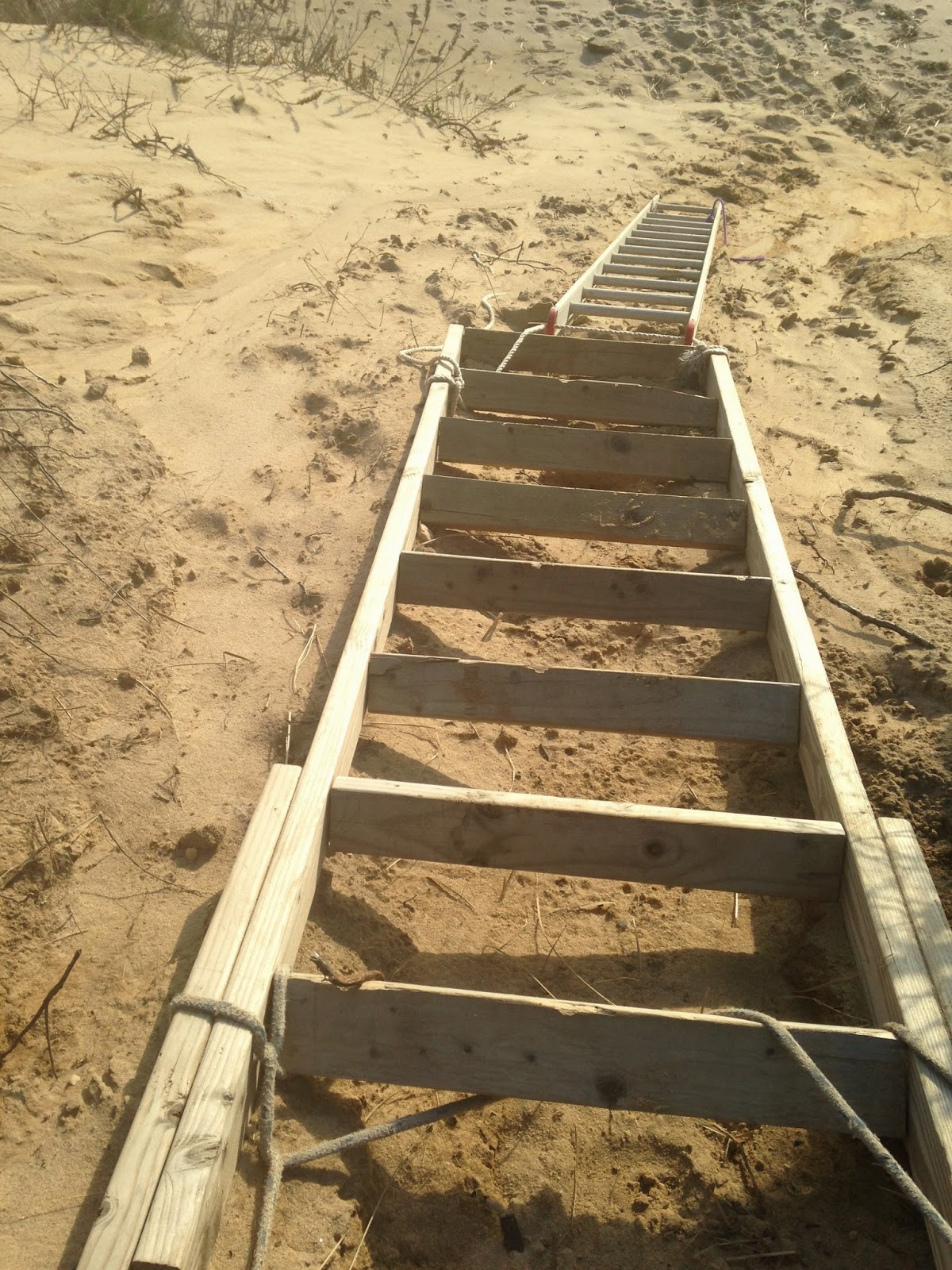 We used this to get back up. 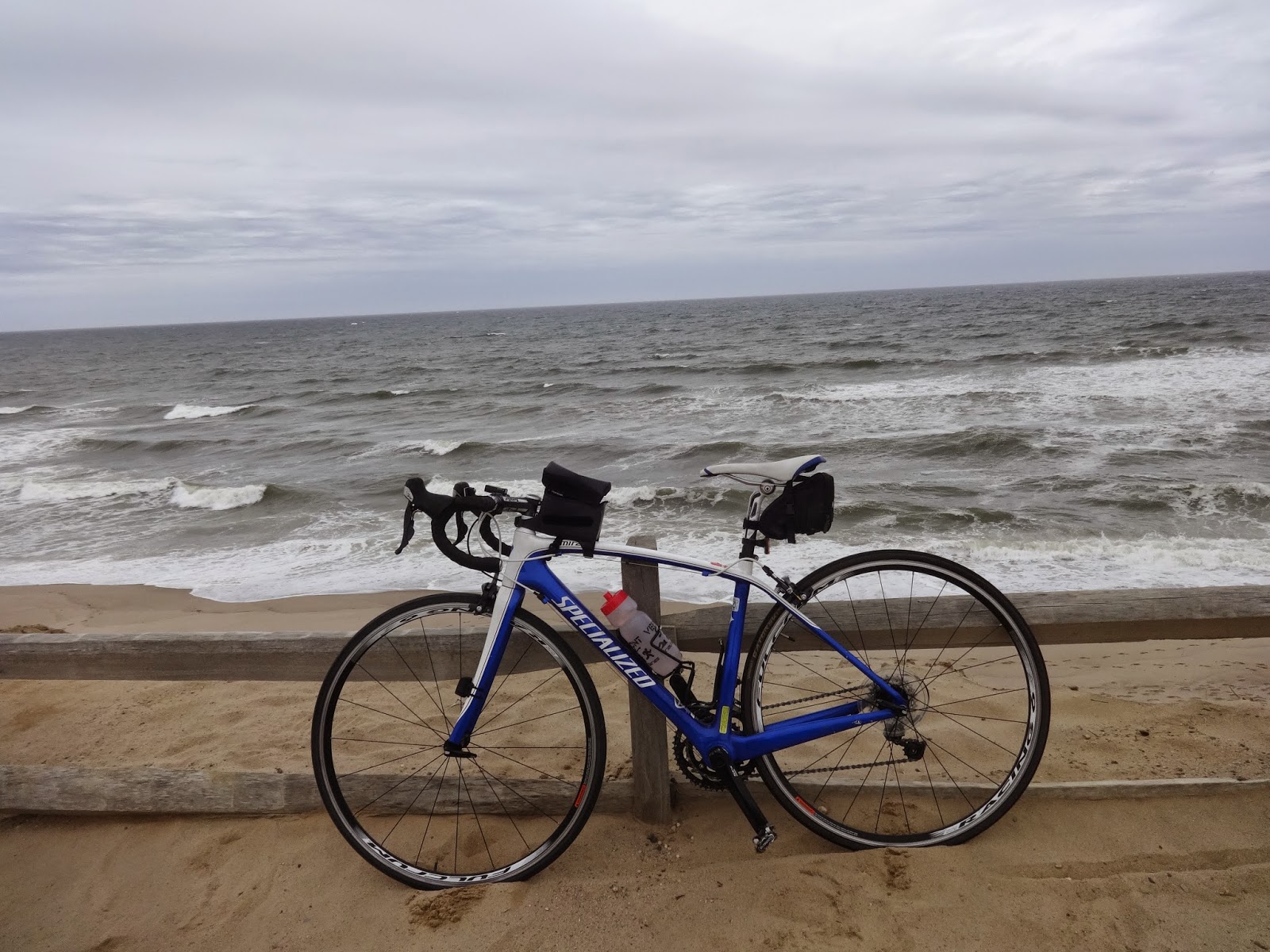 I enjoyed my runs. The terrain was quite different than what I am used to.  I either ran along the road overlooking the ocean or on the beach.  Truthfully, the tide always seemed to be coming in no matter what the tide charts said and I wasn't totally comfortable with the small distance between the water and the dunes.  The dunes were steep with limited access to get up and down and I didn't want to be caught down there.  There was a lot of evidence of where houses used to be as the dunes have receded!

My knee is doing quite well.  The chiropractor I am currently going to twice a week seems to be making a difference.  So far she has treated other things and hasn't even started on the knee itself yet but the neck bones connected to the............

I'm still slower than I can believe but I am very happy to be running. I still can't do my favorite breast stroke when swimming but biking is very possible and I can run quite well without repercussions.  It's not all better but it is so much closer.  When I can't run I miss it more than I would expect.

I have been doing lots of new routes with running which I love.  On the Cape of course. When I go to my chiro appts. I run after one of them in Middlebury. I've run around the college some and even on the track.  I throw the track into the middle and enjoy watching all that is going on.  I go in different directions out of town depending on how far I want to go. It will be even nicer now that the snow is gone.

So that's my life now. I haven't been reading blogs and I apologize. I hope to get back to them this weekend.

I loved getting to follow along with your trip on Instagram. You really have a wonderful eye for pictures. And I know how happy all those bike miles make you! :)

Loved seeing all your pictures on FB and glad to hear your knee is doing better and you are still enjoying life and workouts!

What a great ride! Thanks for giving me the possibility to visit your beautiful environs through your pictures.

I'm Glad to hear good news about your knee.

Love, love, love your new cover photo (and all the photos really). What a wonderful and active vacation! Glad to hear your knee is feeling better.

So so beautiful. I'm such a fair weather biker. I don't like to ride when it's cold. I'll run in any weather, tho!

Welcome back. Sounds like a wonderful vacation. I love being near the water. I haven't been to cape cod in many many years. Count down to VCM?

Glad your knee is getting better. A beautiful vacation in wonderful places.
Coast Guard Beach: I'll never forget my 20 years in the Coast Guard.
I like a lot your new header.

The scenery is so beautiful, it would be a waste not to be active there and see all the beautiful nature around you.

Great vacation if you ask me.

Cape Cod is beautiful. You were lucky to be able to spend so much time there. Glad to hear that you're getting on top of your knee problem. It's not fun being injured!

Ooh, I love that new header picture! Great that you are getting so much cycling in.

Love your new header pic! You are RUNNING! You are like Steve and I - our vacation time away revolves around being active, either running or riding. There isn't another possibility! Wow! 222 miles on the bike and 22 running - you are rocking it! Did you take a few days rest when you came home? Sounds lovely being able to ride the majority of your miles on bike paths away from traffic. Distracted drivers are too common any more and make me nervous while out on the road bike! SO HAPPY your knee is beginning to behave. What other grand adventures are on your horizon???

I miss Cape Cod. When I lived in MA I was in no shape to run or bike any distances. Maybe I should go back now just so I could do some decent biking there.

This looks absolutely amazing!!! You are such a great photographer. You really know how to capture something on "film".