It's Over or Vt. Sun Tri Report

Phew!  I was quite worried about this in spite of saying I was ready.

Thanks everyone for the messages of support on my last post!

As I was packing last nightI smashed the toe I have injured several times and knew it would be sore today. One more small thing to worry about. I immediately stopped and iced it so it was okay but I did notice it. 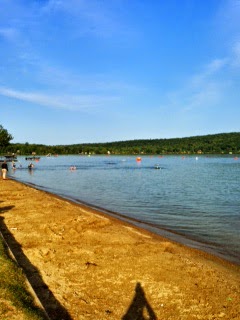 They put those buoys so far away.

There was a sprint and an Olympic tri today and they were well attended so there was a lot going on.  I must admit I like it when there are races of different distances.  There is more to watch and I can look at THEIR swim course and think, "Okay, at least my course is much shorter than that one."  But always always this course looks so long to me.  I was in the last wave and before I knew it we were off.  I seemed to be doing okay.  There were a lot of buoys and I just concentrated on getting to the next one.  There were people around me - yay - and people behind me - yay!  (Not to be mean to them but you get it.)  I still am not able to do much free style even though the breathing feels better. So I did some but I mostly did breast stroke.  If I found myself getting nervous about my breathing I had a song I would sing (in my head of course) and once I counted strokes for awhile.  Both helped.  I never had to get on my back or had that complete panic feeling. A huge win. When I came out I looked at my watch and it was right on what I typically swim this race in so I was thrilled.

Transition 1 was quicker than usual.  I am never fast here but there were improvements! 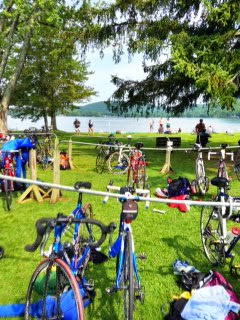 This is afterwards.  It was tricky finding my bike.
It was crowded but if you come out of the swim
late, not so bad.  Look at me finding the
positives to that slow swim.

Then oh yeah, it was biking time! And I was behind many many people. I started passing right away.  One guy I passed told me I should feel great as he started swimming 4 minutes before me and here I was passing him on the bike.  It was actually 6 minutes before me, he was 31 and  in the first wave.  Way to make me feel good!  I had people to pass the whole course. Sometimes it isn't very crowded and there are just a few spots to pass people or it is half way before I catch up with people.  More beginners?  I counted - I passed 39 people.  You may laugh at my counting but it is very motivating to me. I can see them ahead and I know I can pass them.  This doesn't happen to me running or swimming so I love it.  One woman passed me back (I knew her too) but then I passed her again.  There is a long hill (where she passed me - I am not good on hills). When I came in I glanced at my time and was quite sure it was the fastest I have done the bike in the 5 times I have raced this.  (IT WAS!)  Yes, I broke 50 minutes which I hadn't done. When I've been practicing I've been over an hour.  Yikes!  Loved, loved the bike.
I was 84/157. So close to being in top half! Very pleased with this.

Transition 2 was okay. I was trying to get my Garmin to work but just threw it in my bag. It wasn't worth the time although I do like the mile splits.

I could see by the well marked course that I was doing fine.  My run time was comparable to what it has been the other times I have done this. So much better than my slow walk/run two weeks ago.  I was so worried about a swim panic and having a sick feeling for the rest of the course and I am so grateful this didn't happen.  Some people passed me here, including my friend, but not 39 people so I made some ground on the bike for sure.
I was 104/157. 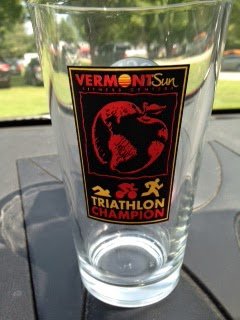 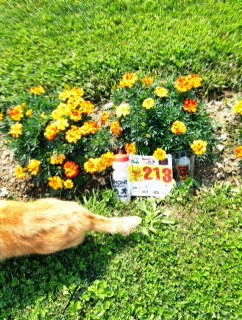 Trying to set up a picture and the cat photo bombs again.

Overall I am happy and once again eager to do more tris.

I'm glad you had a good experience this time!

Awesome race! Really cool you passed so many people on the bike.

Those are some seriously big AG time differences, but you were WAY closer to 1st than 3rd was to you. She'd better watch out! :)

All your bike time is for sure showing in your results. You know now you need to keep riding more hills. :) They make rides more interesting, anyway.

We start school Thurs, kids on next Monday, and I was in my classroom today as I will be most of this week. Enjoy the rest of YOUR summer...time for me to enjoy it vicariously through you again!

way to go!!! good to put the bad experience behind you! and I love the pint glass, great to get a useful age group award :-)

Great job! Glad you had a good time!

Excellent! You are back to your badass self. So glad you put that panic experience behind you and got back out there. Still coveting all of your race pint glasses.

What a great day! Fun to read how it all came together and went wonderfully this time.

You did great! Getting back on that horse after you've been thrown is so hard. You're a brave, brave woman.

I think you did great! Didn't I tell you a good race would follow a bad one? Well, well done!

I am very happy for you, a very good experience! You did great and you earned the podium! Long time ago I also was 2nd on 3 in my age group (but this is a secret not to share).

Hi, Andrea! I'm back to reading blogs--my horrible job is almost over (three more weeks). Congrats on your great tri race. You totally rocked the bike! I am so tempted to tackle a tri myself, though the swimming scares me; I'm very, very, very slow, though I do love being in the water.
Saw your Alaska pictures. So beautiful, eh? Earlier today I ran past the same pic of the Coastal Trail you posted--such a small world. Also, congrats on your anniversary (sorry for so many congrats but I'm a bit behind in my bloggy reading).
Cheers and happy biking/swimming/running.

Fantastic! Well done, you did a great job, I'm so in awe!!

Excellent! I think you really had a great experience.
Enjoy your outdoors activities (biking/swimming/running)!