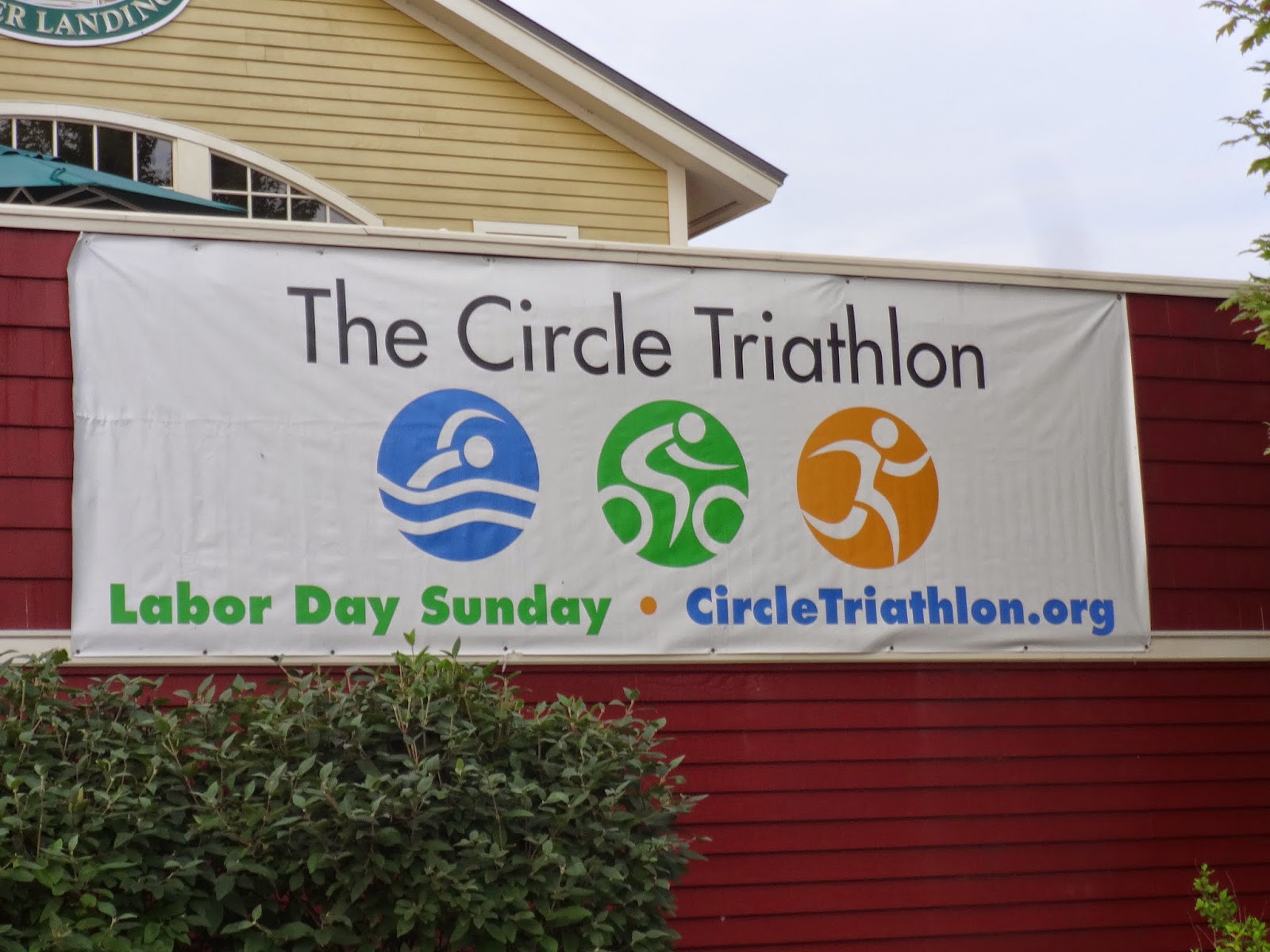 There are so many things I liked about this race.

#1 is my shiny new PR!  Yay!  I did better on the bike and T1 and it made a minute and a half difference.  I was slower in the swim, better than last year on the run but not as good as the first year I did it and slightly slower on T2.  But overall - victory!  They don't give age group awards here but I would have been third at best out of not many.  The woman who came in first in my age group was FAST! 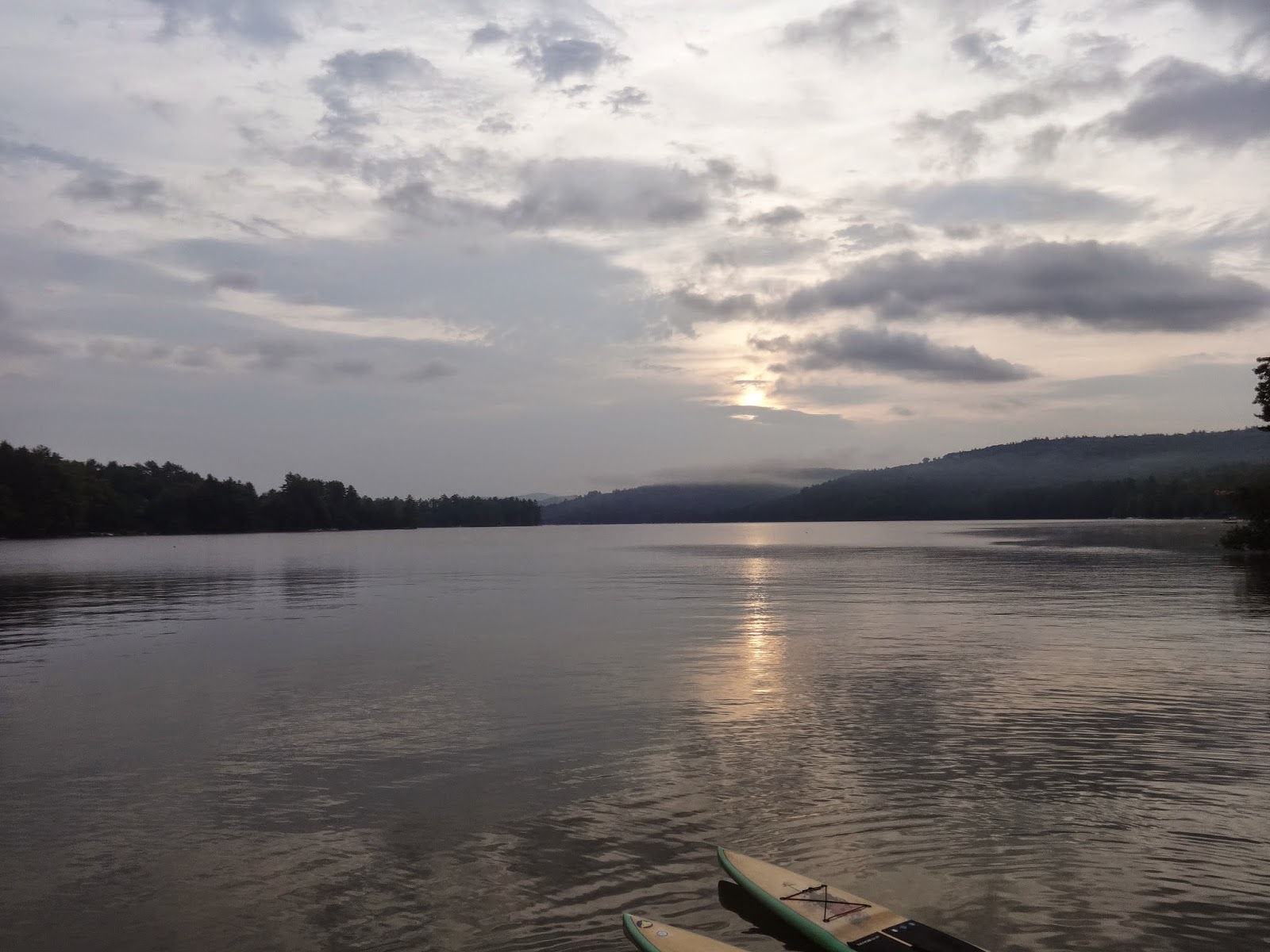 Let's start with the swim.  It was so peaceful this morning.  Finally it got started. Waiting for the start just increases my nervousness.  There were people doing one for the first time and I suspect they were more nervous!  The swim went okay. I started out too fast and made myself slow down as that whole breathing too fast thing isn't comfortable in the water.  Apparently one guy had to get in the canoe in the heat before mine. I didn't see it thank goodness. One guy I was talking to after told me it made him feel good as it all went just the way they said it would in the pre race meeting if someone was in trouble.  Good to know.  I thought the course looked long and I do think I'm getting better about knowing the distance.  But it was the same for all.  I passed some people in this race. Really!  Of course MANY passed me. I was in wave 7 out of 10 and waves are random so faster swimmers can be after you for sure.  I did the breast stroke mostly. I can see better, I like my breathing better, I can't see weeds.  It was a little weedy but I told myself to get over it, it wasn't terrible.  Plus I have a song I sing to get my mind off the weeds.  So my time was 13:05 which includes a run to transition.  Last year it was 12:27.  Oh well.  I was 147/189.  Hey, that's quite a few people I beat. 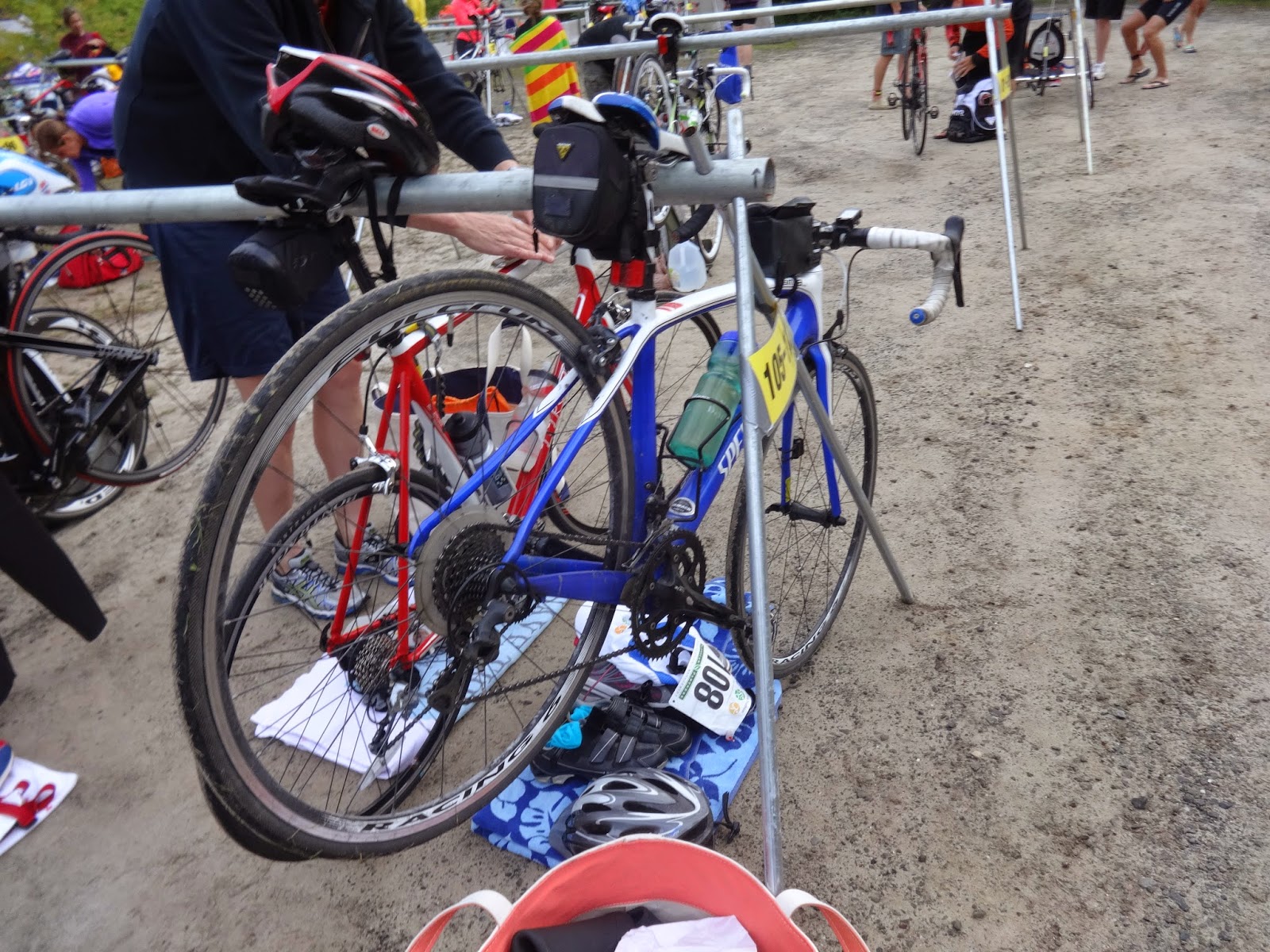 Then it is my happy time because I am on the bike. This course is 12 miles and takes me about the same as the 14 mile one near my home. It is HILLY!  I heard some guys talking ahead of time about how hilly it is and they were surprised it was pushed for beginners.  I lose some time on the downhills as I am not brave particularly when I don't know what is around the corner.  There are two major hills and lots of more minor ones.  I passed 24 people, you know how I like to count.  I was 112/189.  My time was 49:33.  Last year this was 51:01. The year before 52:19.  Oh yeah! My pace was 14.5. 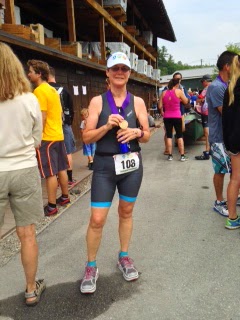 I hung around some after and ate blueberry pancakes and home fries.  Then I was leaving but I watched the cutest little kids first running in from the water to ride bikes.  They were seriously little and seriously brave. There were also some older women and at first I was confused.  But there are three races and you can choose anyone of them, no matter your age. You can do a really short race which would usually be offered only to kids.  The women looked so excited! 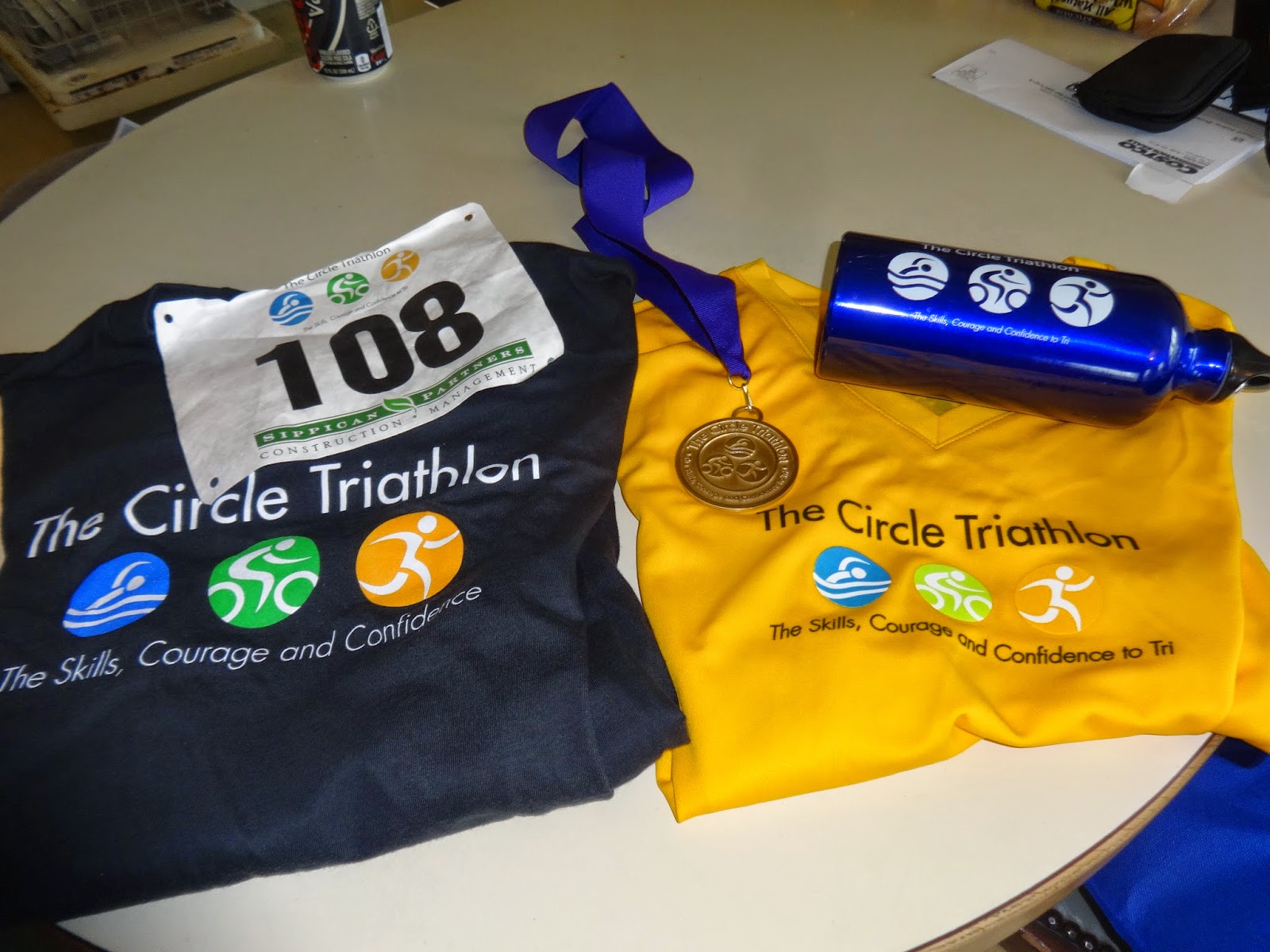 Then I went to Dunkin Donuts, race kit on, medal on, number still on.  There was an older woman there and a school age girl.  The woman thanked me profusely for doing the race.  It is for girls who don't have opportunities to go to camp, do this mentorship program this lady was involved with and other stuff.  This woman said she had been meeting with her mentee for years but this was the first time they had watched the race. I was already sold on this race but the appreciation of this lady made me think I need to come every year. This year I had some hesitation but I  won't next year.

The day before the race I walked around Plymouth where I got my undergraduate degree. I was so happy to be walking around with those wonderful memories on such a great day.  Here are just a couple of pictures I took of that. 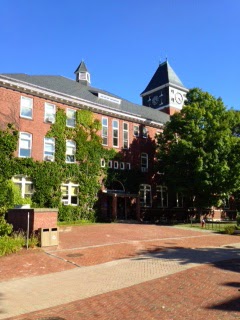 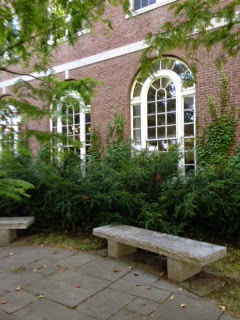 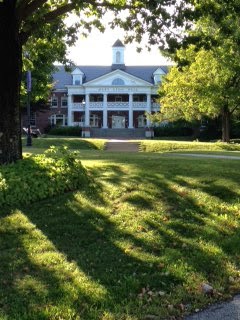 AWESOME, again!!!! You have banished the bad swim and race demon!!! Looks like you had lovely weather, too. And a PR!!! Woo hoo! You rule on the bike, your Happy Place. Hills make you strong, btw, so keep after them as much as possible. :-) It's great the race benefits such a terrific cause. That makes it even better when you know kids are benefiting. Hope you are able to continue to get some good, long weekend rides in now that school is back in session. Boo-hoo, no more long mid-week rides. But what a fantastic summer you can reflect on as we move into fall and winter!!!

You smashed it! That's such a great improvement. It's great to have your stats from the previous two years to compare against. Almost two minutes faster in the first transition? Did you blow dry your hair first year??

Wow!!! congratualations - I am so pleased for you - you did great and most of all, had a great time! Woo hoo!

Yay, well done! Great that it was for a good cause too, and appreciated.

Your bike mileage is ridiculous - that's my goal for the year and I'm not going to make it!!

Congratulations! You really did well! You have improved so much with your tri's. You are inspiring my wife with this and it is awesome!

Congrats on your PR! Nice when you see improvements like that. All that riding is paying off building your engine.

This race report made me so happy!! Congrats to you on such a great day, it feels SO good to see improvement at the same race!

So happy for you.

Congrats!! You are amazing!

Congrats on that great race!

Sweet Jesus 500 bike miles! You're a machine! Congrats on another awesome tri and PR. Glad you aren't letting the weeds get to you.

What a beautiful area!

You're smoking me on the bike miles! You're so much better about getting out during the week.

I'm so happy to hear about another successful tri, both race-wise and emotionally! Yea for pushing aside the fear. I'm so glad you're not letting one bad race keep you from something you love so much.