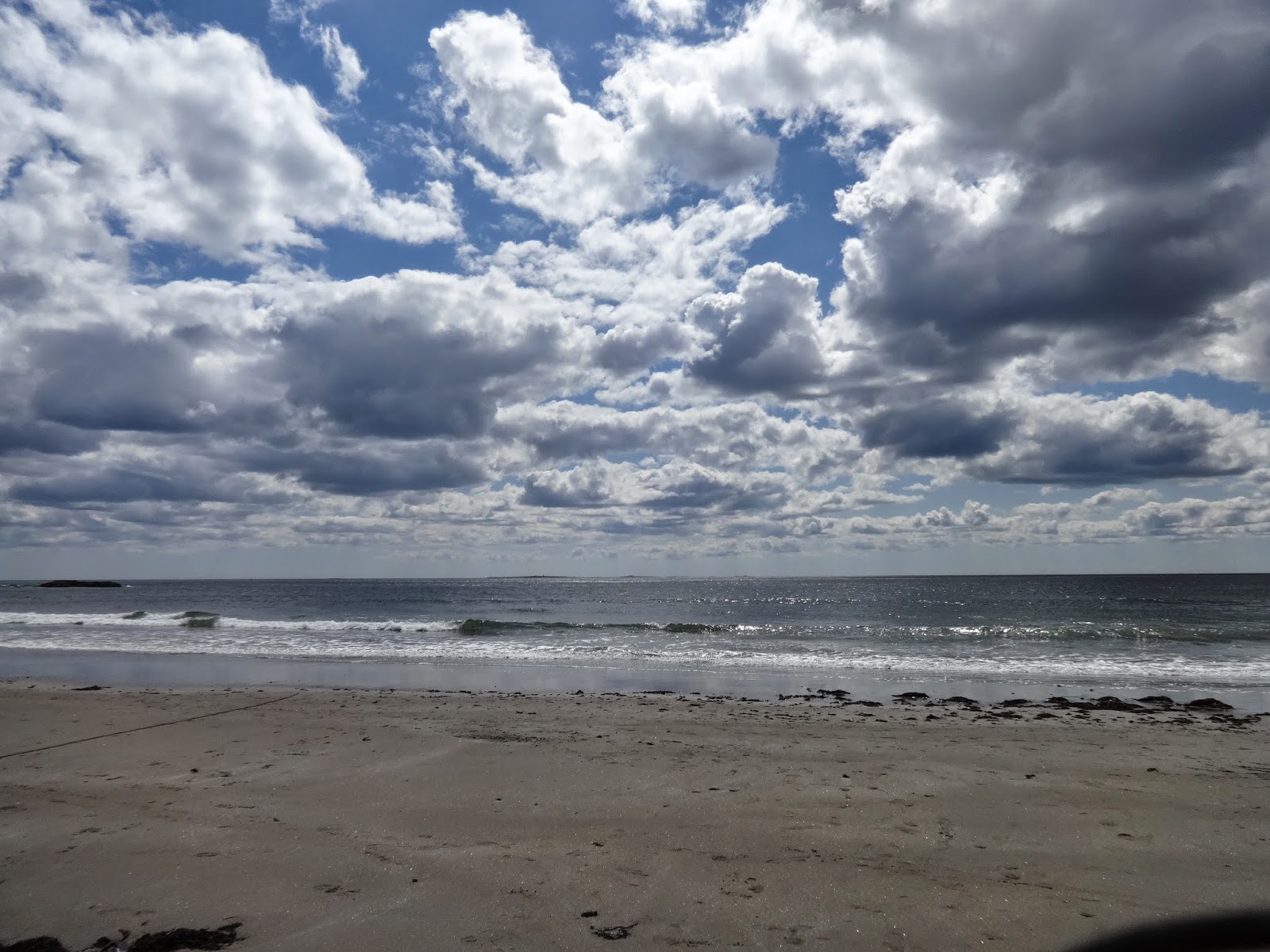 Who wouldn't want to race here?


I loved this race. Truly loved it and I will be back next year.   In my home state of Vermont a half was happening that I have run 5 times or so.  I also like that one but felt I needed a change and it was a good one.

The race started early so we were up and on our way by 6.  I got there early enough for the good parking but not for the race t shirt. (only complaint) The smalls that were left would be perfect for the small girls in my 3/4 class.  I got a crew t shirt instead. Not tech. No race lego. Different color. I'm not sure why I took it. I should have taken the small for my race collection.  But as I said - only complaint. 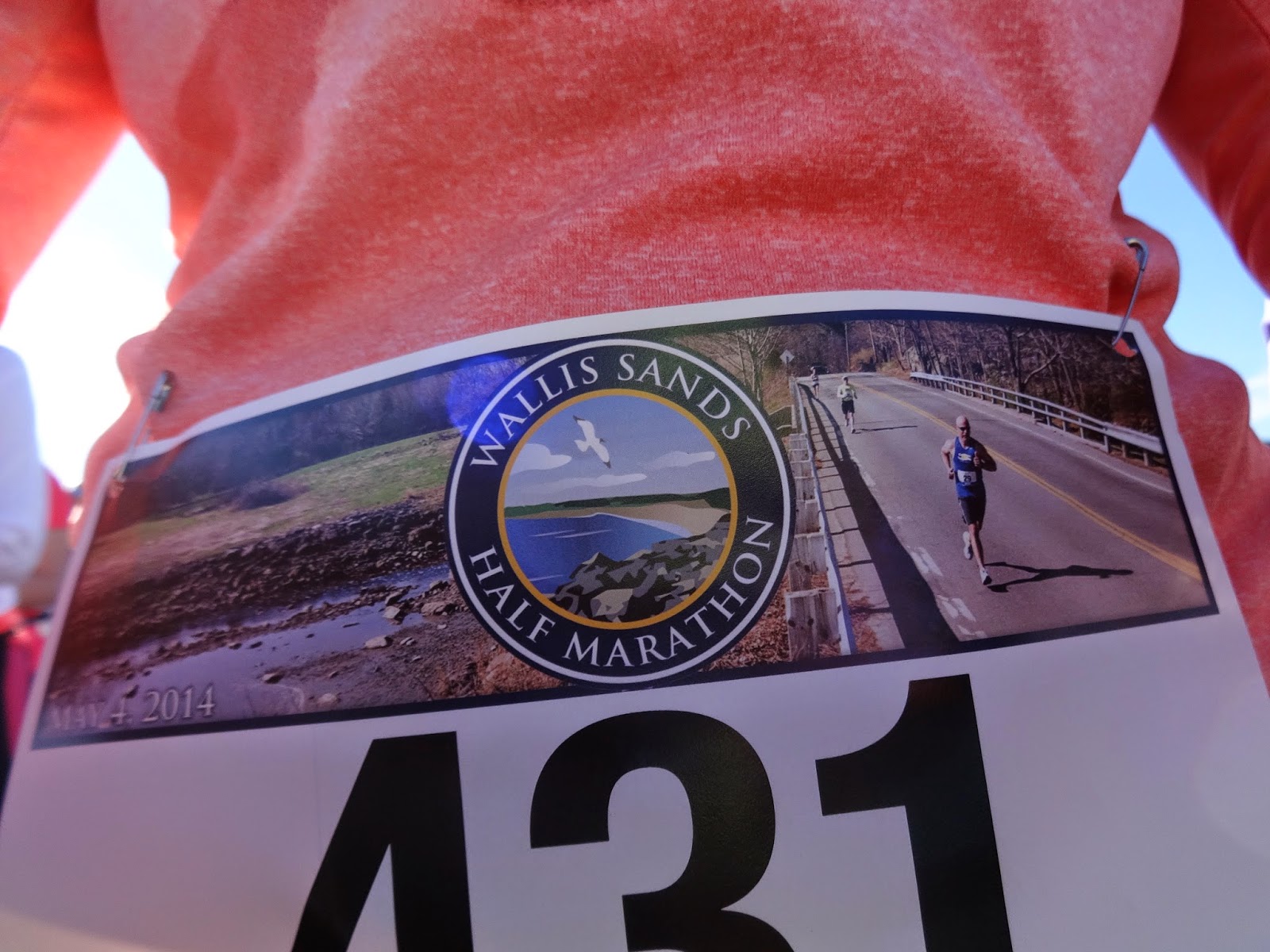 But the bibs were awesome. They had a really nice photo of the race along with the logo and your name. I love having people root for me like they are my best friends.

Plus the race wasn't cancelled!  As I said I got there early but almost didn't have time to get ready because the port a let lines took forever. I had some stranger hold my place as I got more nervous and ran back to my car to put on my shoes, race number, sun screen, hat and all that.  I got back to the port a let line just as the woman was in the front and I would have had to go to the back. Whew. 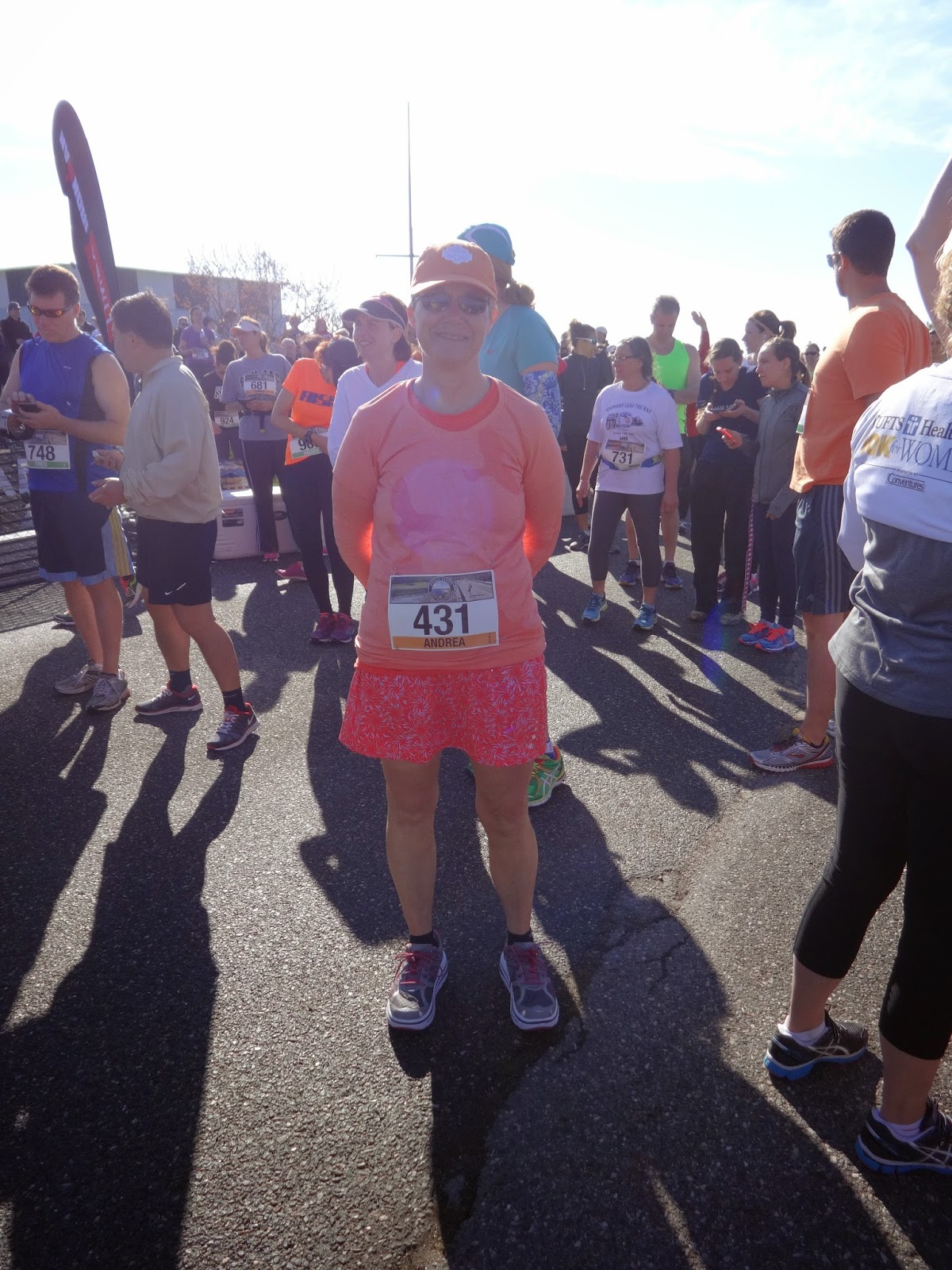 Enjoying being in the front.

The start was in waves 5 minutes apart with 200 runners in each wave.  The fun/unusual part was I was in the very front to start.  We all giggled and took pictures because we weren't used to that position. Then we had to ask which way to turn as there was no one to follow! 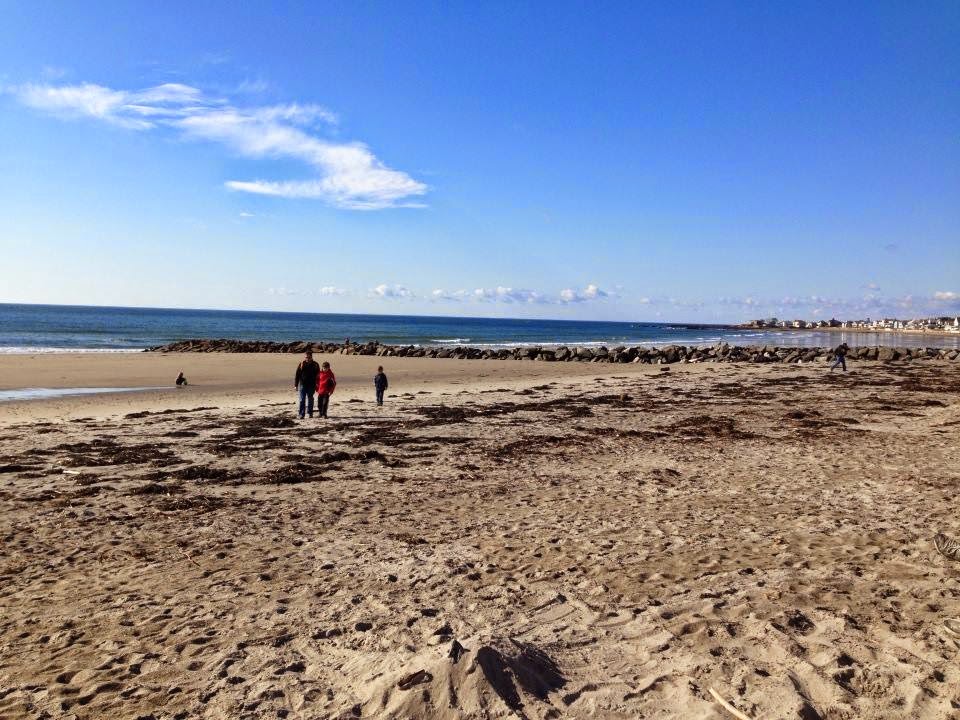 One of my friends sat on the beach near the start as I ran.
The other biked the course. 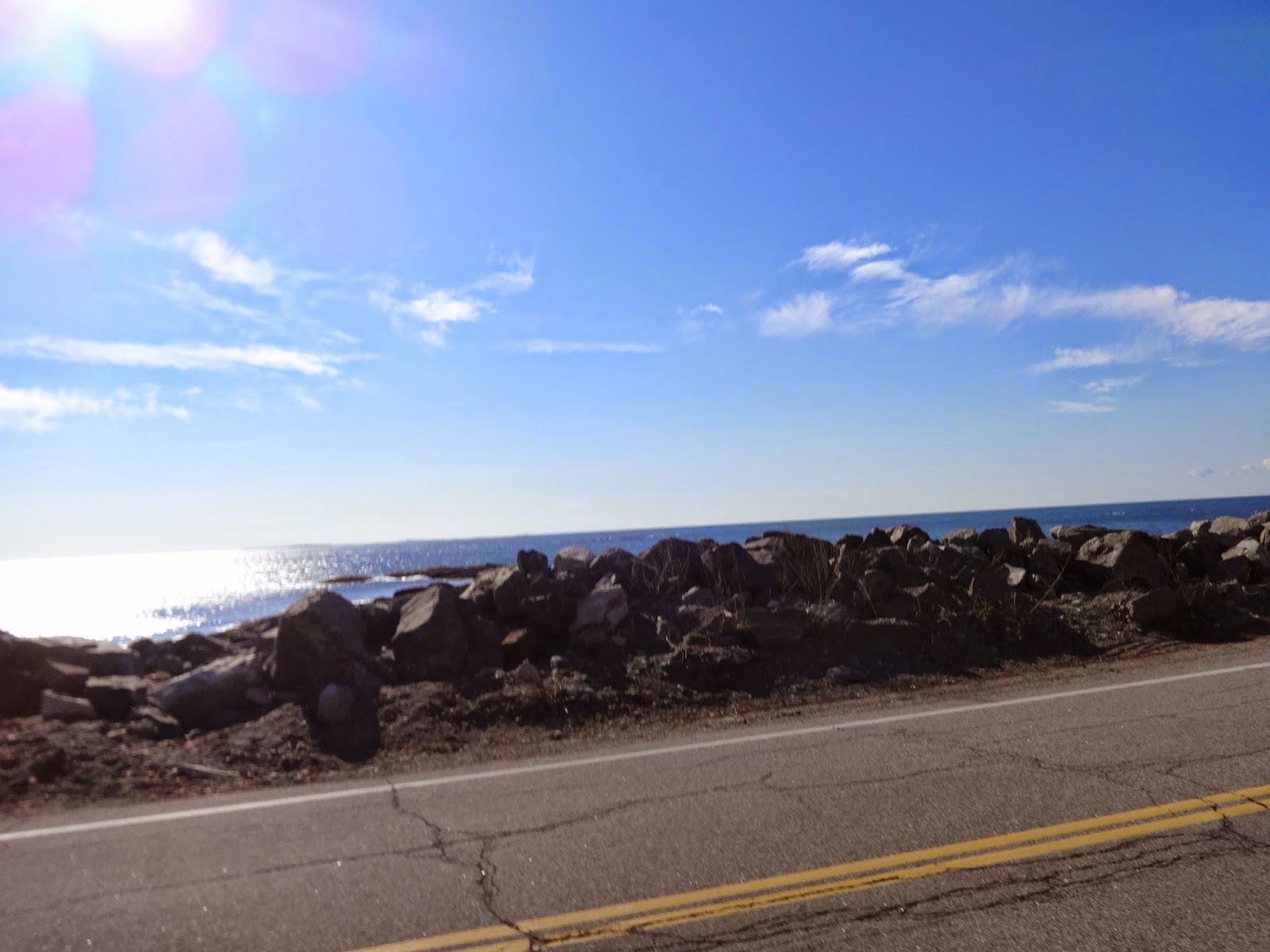 I took pictures as I ran ant they are so so but the ocean
was stunningly beautiful. 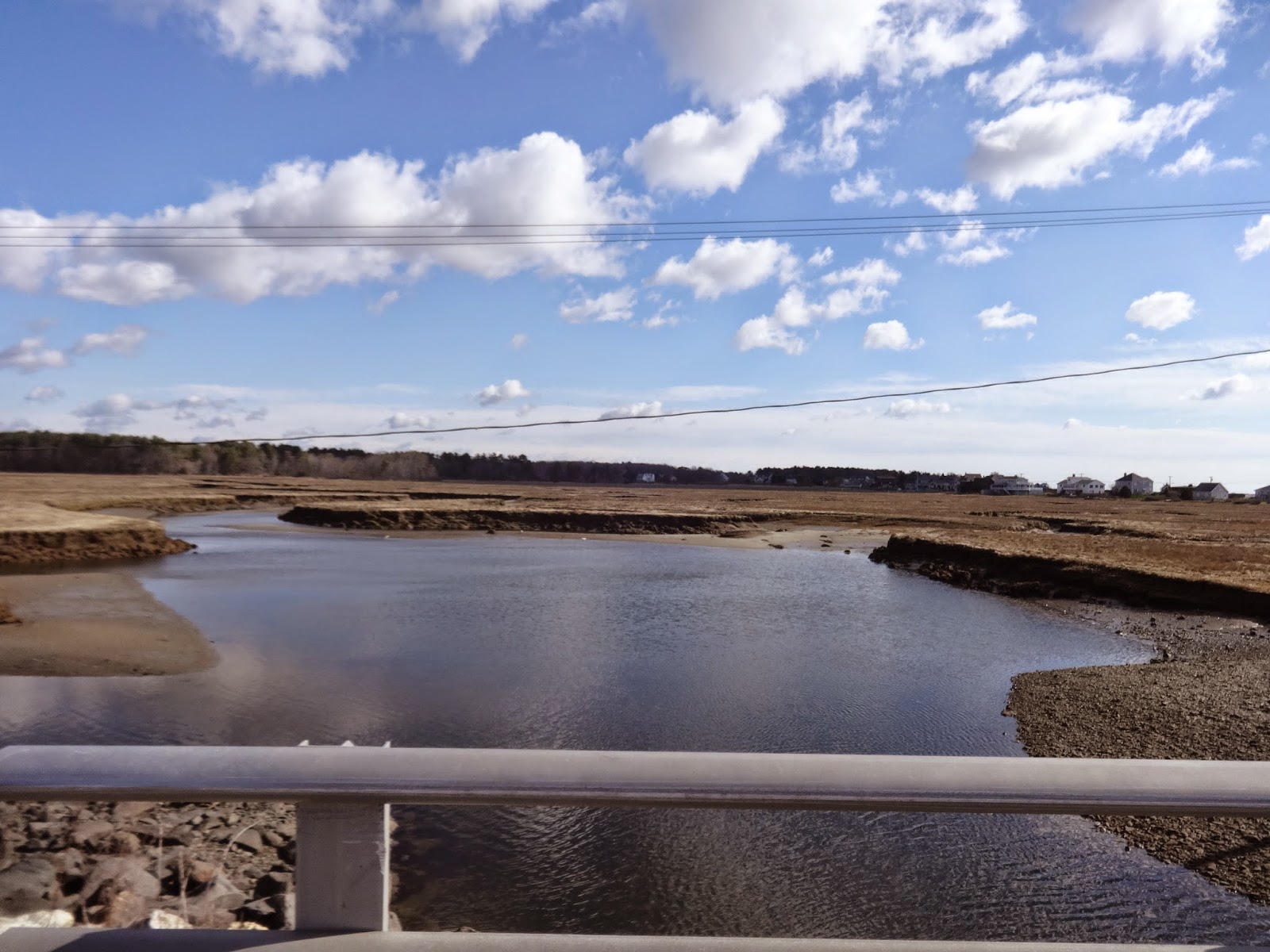 The first 3 -4 miles are right along the ocean.  It was sunny and windy but not cold. At times I was a little hot and at other times I thought I was dressed just right.  I loved loved this part.  Running by the ocean puts me in my happy place. Throw in a race and I almost can't stand it.

Then we turned toward the town of Rye Beach which seemed to be pretty attractive. The water stop groups all had themes and were very enthusiastic and polite. They were mostly kids and very fun.

I had decided I was going to run 10 minutes and walk 1 minute.  I didn't start this until after the third mile.  I tried to pay attention to people around me to see if it was slowing me down. It didn't seem to be. There were two women in particular I was hanging with for quite awhile.  They were running the whole time.  One I got ahead of in the latter miles and never saw again. The other finished about a minute ahead of me.  I could have run the whole way but having that minute of walking time to look forward to made it all seem very bearable to me.  I walked fast during that minute  using different muscles.  I always start right up once the minute is done.  It also focused me on each mile rather than how many miles I had left to do. 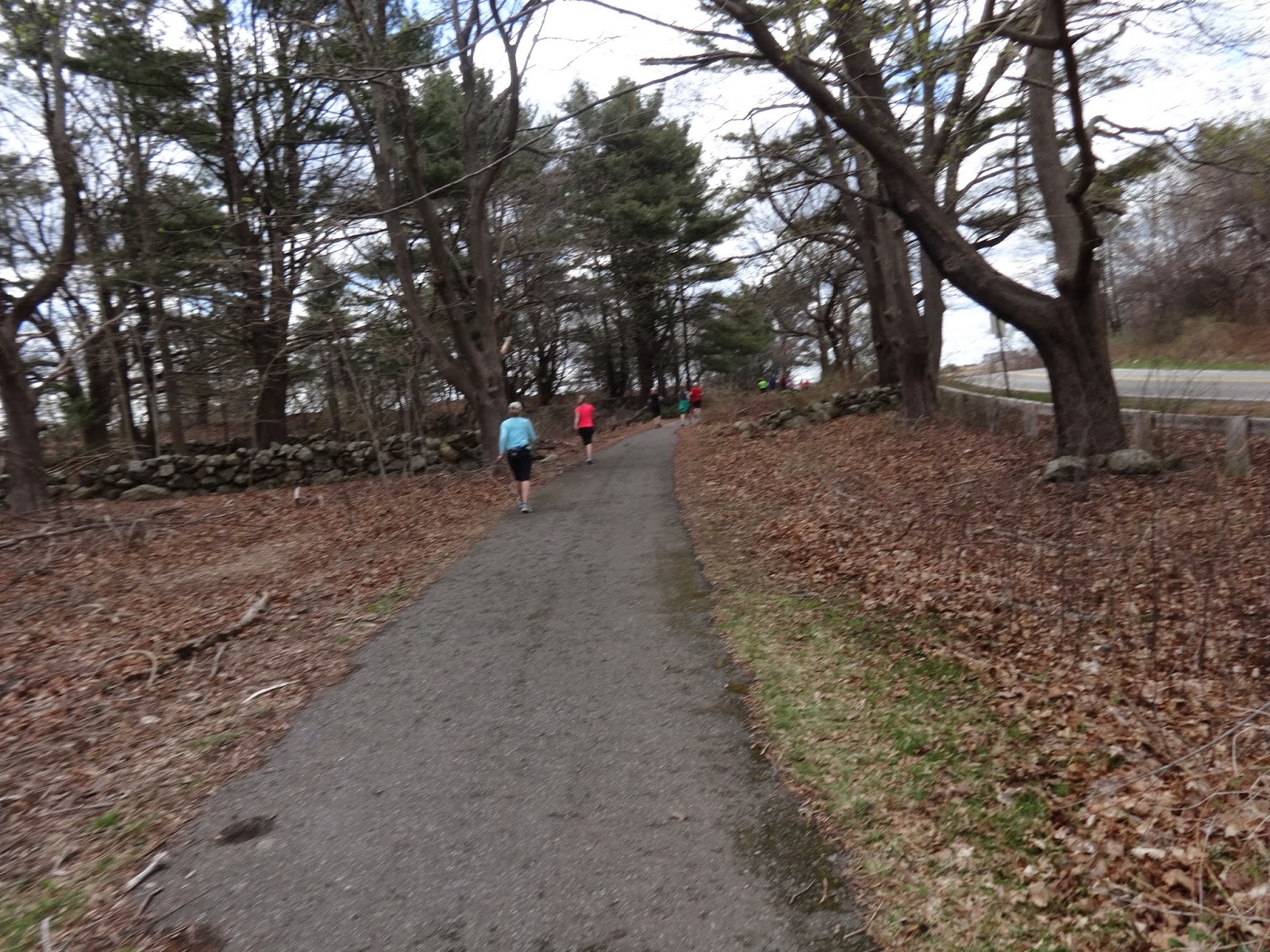 
After you run through many neighborhoods where many people are out to cheer you on, you go on a bike path and lord knows I love bike paths. 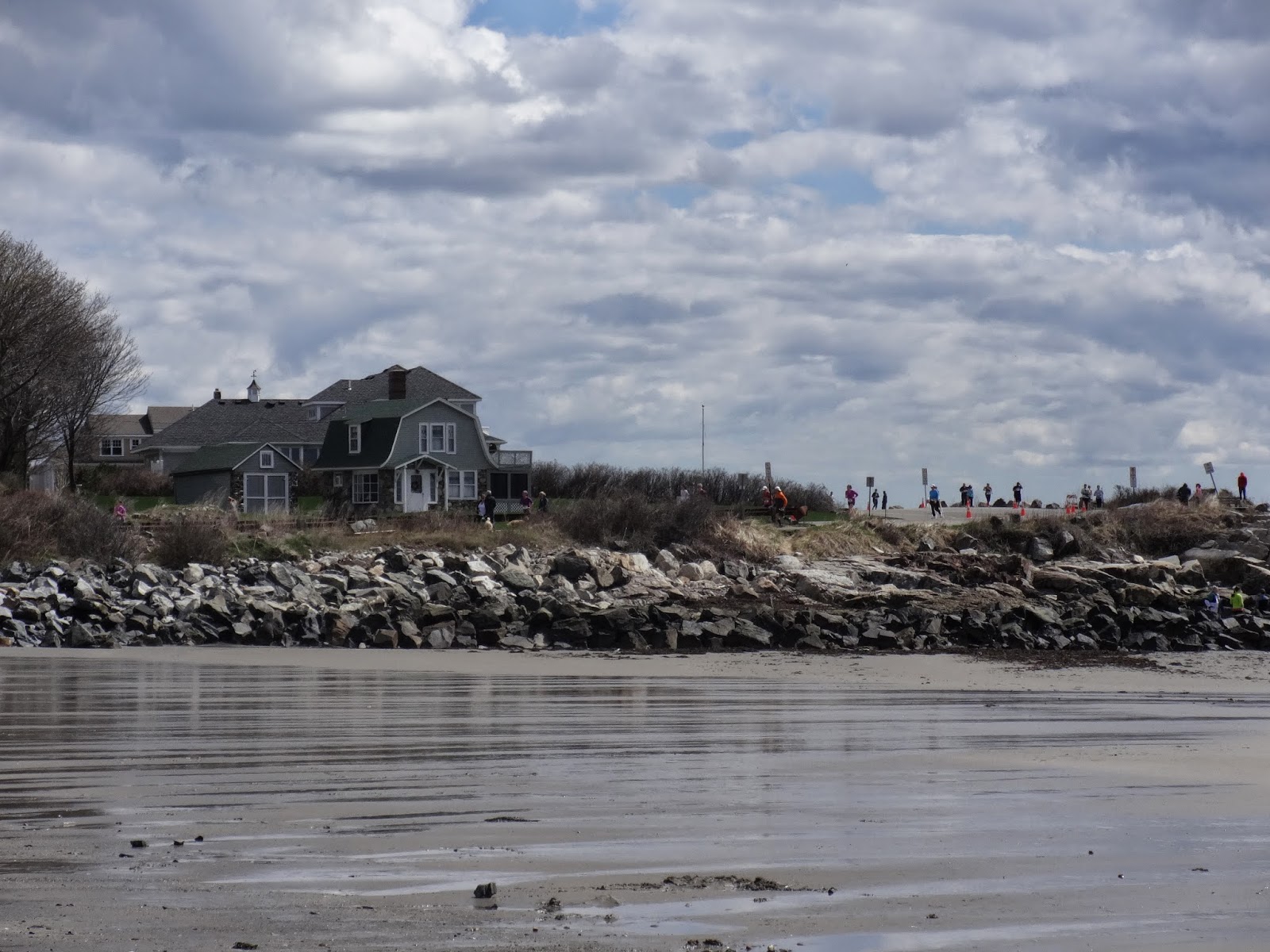 You can see people on the cliff as they approach home stretech. 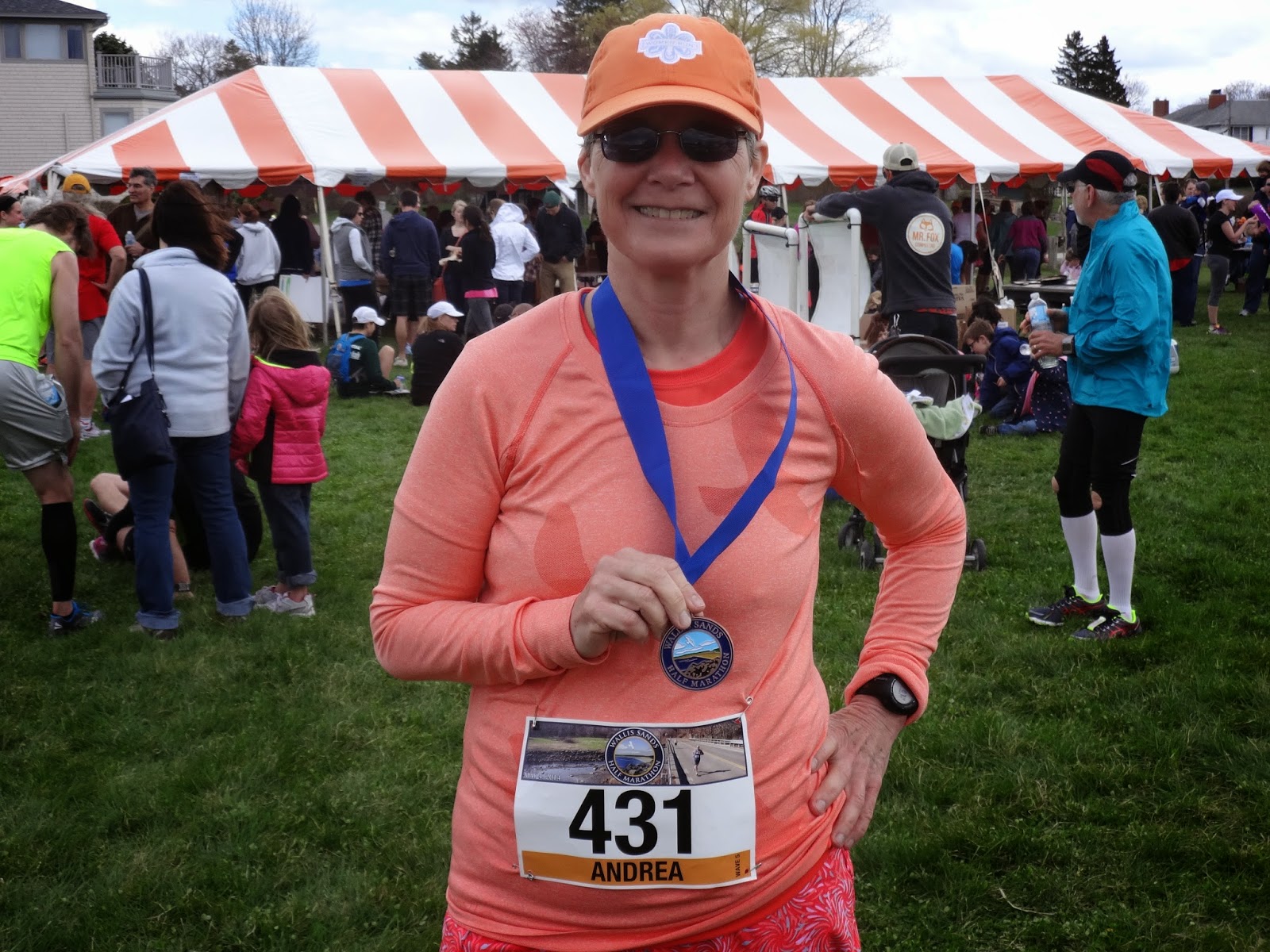 Exceedingly happy with my age group medal.  It's a pretty one. 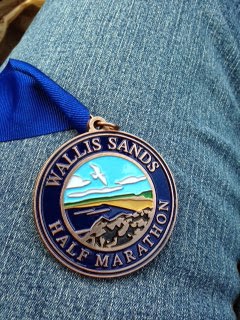 I almost forgot about the whole age group thing until I was in the food tent and saw the table with the MEDALS for age group winners. So I went back to check results (being 60 helps with this) and sure enough I was 3rd in my age group. And there weren't just 3 of us, there were 8. 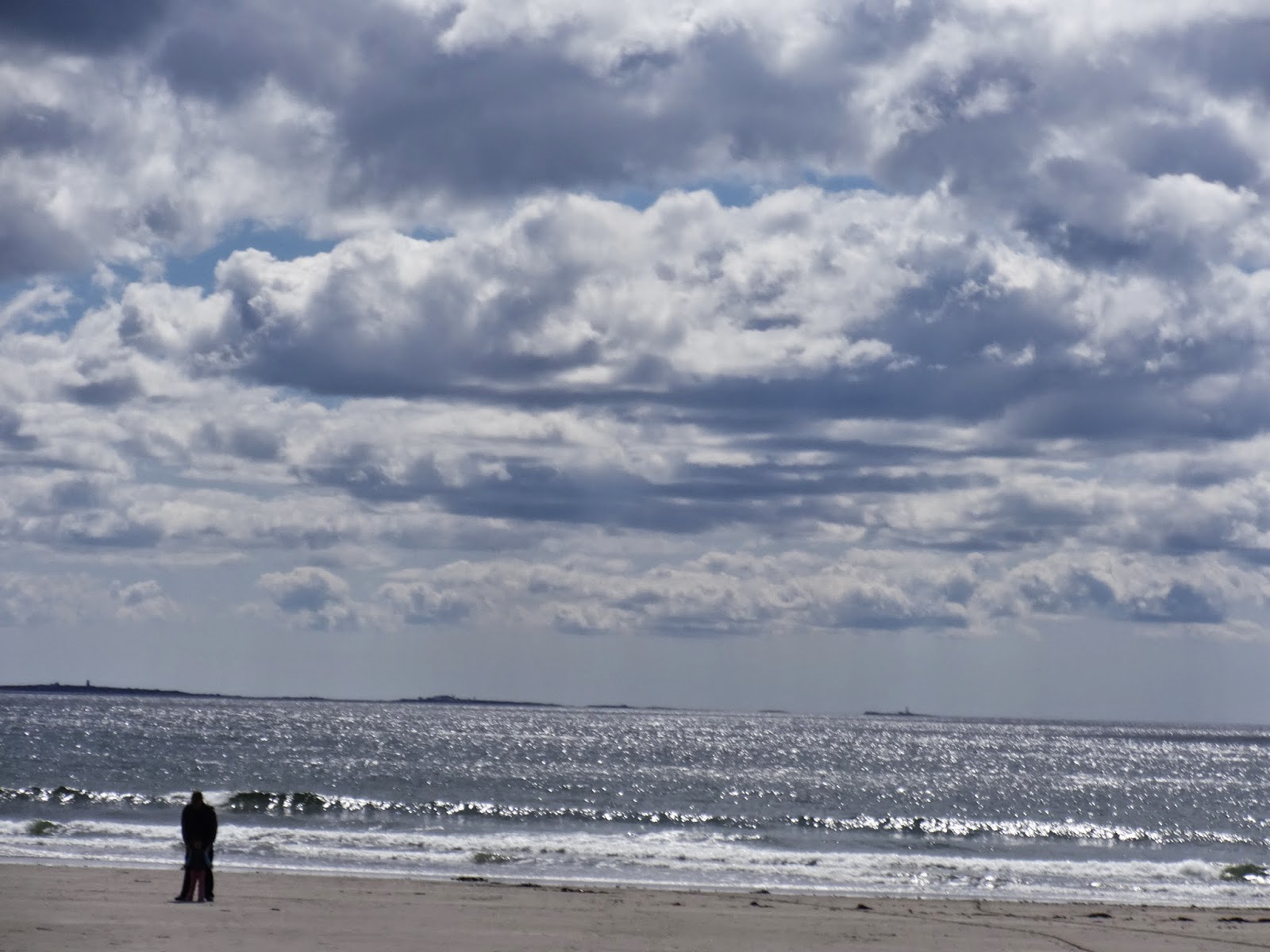 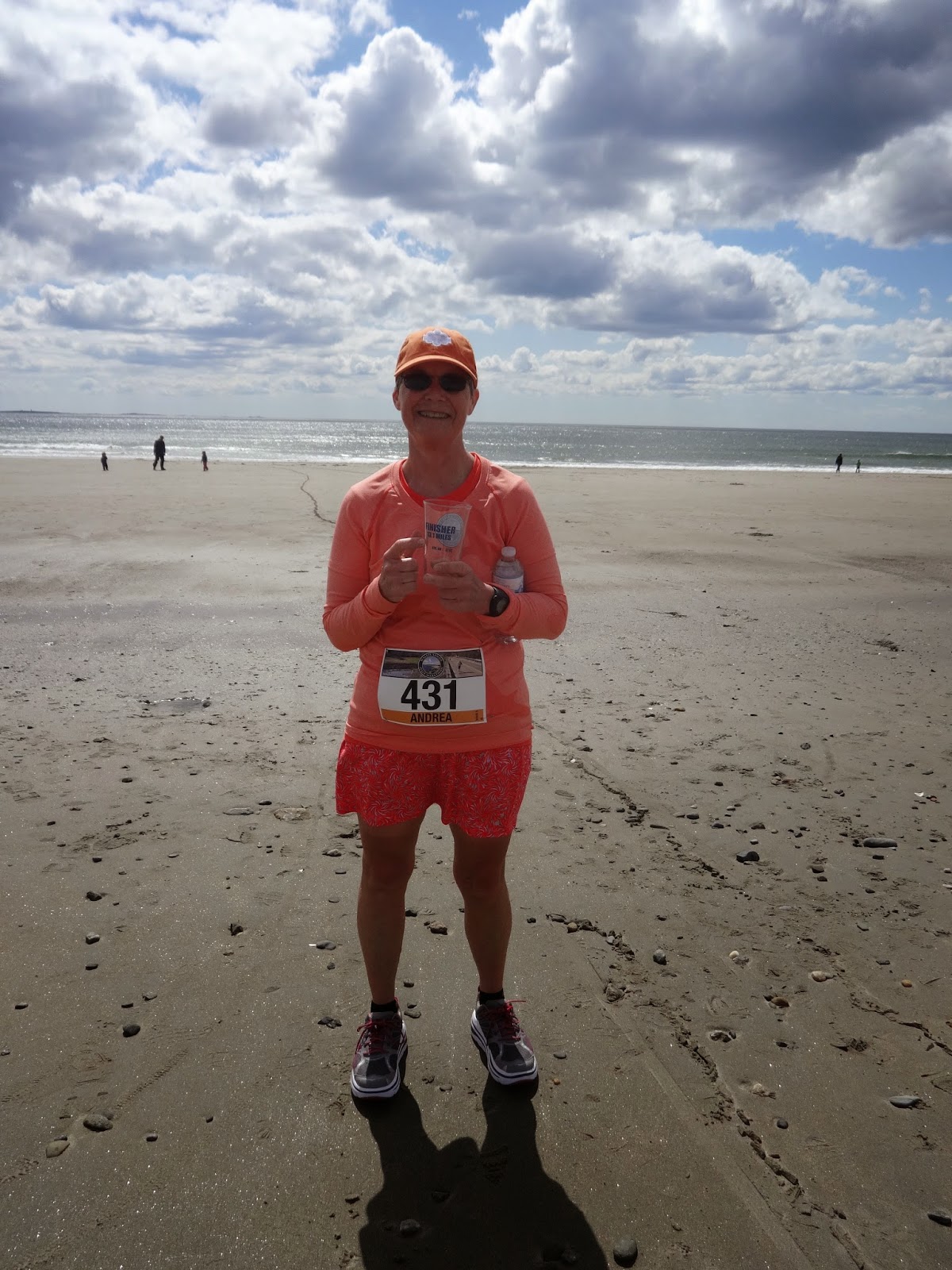 Enjoying the beach holding my new finisher's pint
glass which I had to try out at home. 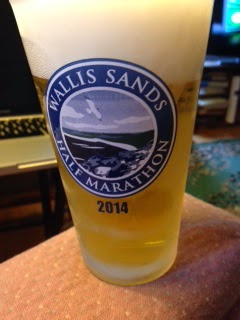 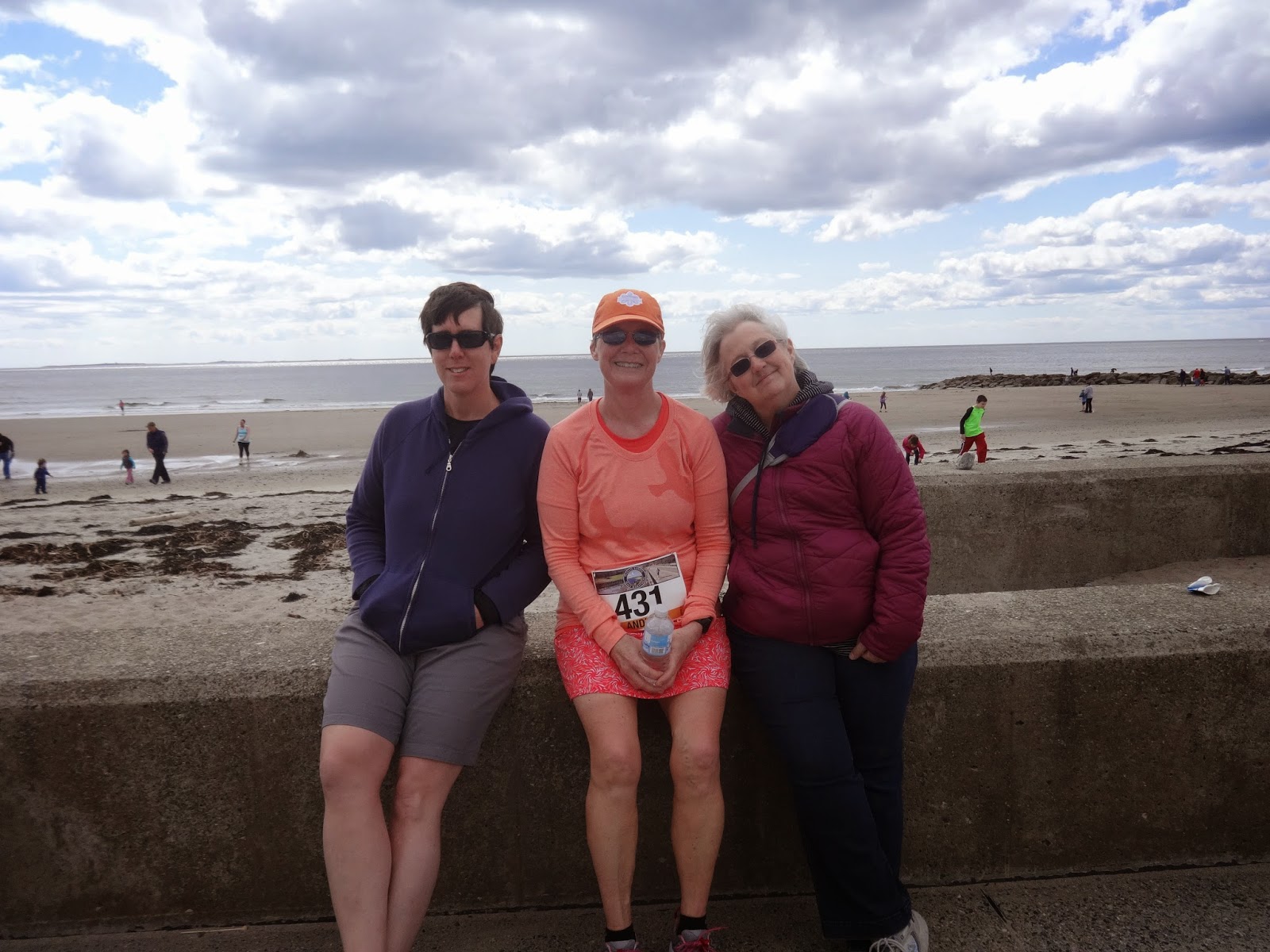 
Plus we got a sweet finisher pint glass.  Will I be back for this one? For sure! I've been saying it's the prettiest half I have run but it is really just one of many.  When All Women and One Lucky Guy was in York, Maine that was a beautiful one and is a route I continue to run parts of when I visit.  VCM is beautiful.  The Shipyard Half in Maine was beautiful.  Providence is nice. Big Lake was nice.  Mohawk Hudson was nice.  Half at the Hamptons which is right down the road is stunning.  Unplugged Half on the bike path is great.   Yeah, I go for the scenery for sure.  Good to have a new favorite that meets that criteria. And it was my 30th half!

Lovely medal and excellent pint glass! I'm sure running by the ocean was wonderful. What a great-sounding race, and congrats on your AG position!

Congrats Andrea! Looks like a great race minus the shirt issue. I guess maybe I need to head to the east coast for a finishers pint glass. Still have never gotten one.

Congrats on placing 3rd! You must have been so relieved to finally be standing at the starting line of a race that was not canceled!

I'd like to run a race along the ocean. Congrats on your age group position ... and there weren't just 3 of your: you made me laugh! I too get to the starting line early for a good parking and a pleasant warm-up before the race.

Congrats. I nominated your for a Liebster Award!

I'd love to run any the races you mentioned. Scenery is important especially in a long race. My problem is the cost of a hotle room when you are solo. So if you ever need a roommate, contact me!! Of the ones you listed, which is one do you recommend first?

That looks like a beautiful run. Not to mention a sweet medal!

Congrats! Great recap and nice job placing in your age group! Happy to hear you finally got to run a race that didn't get cancelled. And it was beautiful!

I love age group hardware, especially when it's not just by default! :) Awesome job taking pics and still beating your time goal!

Lots of cool extras, and what a pretty course and medal (and bib). Congratulations on that AG place and on beating your goal! :)

Way to go on the age group place and coming in under goal! Sounds like it was a really nice race, despite the shirt thing.

Looks like a real fun run, glad you enjoyed it so much.

I have no idea what group winners get here because usually the prices are already given away before I finish LOL. But it's pretty common here that everyone gets a medal most of the times.

That's a great race. Nice location. You beat your time goal. And you got an age group prize. Congratulations!

Congrats on the AG award! That's a nice looking medal. I laughed at the "plus" of the race not being cancelled. Glad you finally were able to run a race you signed up for!