Tuesday we lost one of our three yellow kitties.  He was the oldest one, although he was only 8.  He had a physical not long ago that he passed with flying colors - other than the whole sit in the sink thing. 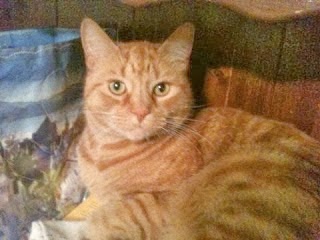 In this picture he's daring me to try and give him another of those horrible pills all the cats had to get.  I didn't dare, he won. Then I took him to the vets and it took two of them to give him the pill.  He hid in the sink while he was waiting for his appointment. 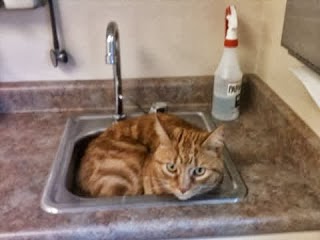 Doesn't he look happy? Well Simba was a pretty dynamic cat. He was our mountain lion, long sleek and strong.  But Tuesday morning, early, he started yowling and went down cellar when he became paralyzed.  Just like that. He was so distressed and kept throwing himself around trying to move.  He was yowling and in such distress.  We called the 24 hour vet and my husband took him.  I expected a large vet bill and a fix.  Instead the vet advised us to put him down (I always thought they had many expensive things to try so if they were suggesting this it was serious.)  Recovery would be very painful and this would be apt to happen again sooner rather than later.  So yes we had him put down. I found all this out as I was arriving at school, not the best of times.  I made it through the day although I can't say it was my best teaching day ever. I went home at my break. My husband had made a box and dug a hole in our flower garden so we buried Simba, near Molly, another cat we had who died.  I got to see him again and have a little closure from the bizarre experience of having a very healthy cat to one who was no longer alive.  Before the day ended I did tell my students about it but it was hard.  One thing 9 and 10 year olds are though is very sympathetic to the loss of a pet. 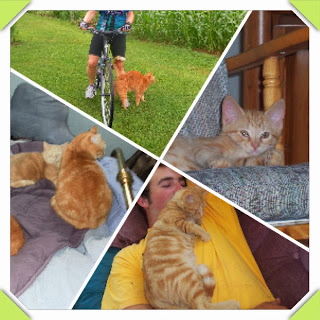 This collage shows Simba as a kitten, comforting Jameson when he
had his wisdom teeth out, being the king of all the cats, and greeting me after
a bike ride. 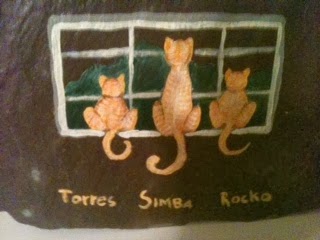 Our house is a bit empty even with two cats still here.  They seem to be looking around and wondering where their friend is. So am I.

That's so sad Andrea. It was hard when we had to say goodbye to Nelson but we'd had months of him deteriorating before that happened and were a little prepared (as if you can ever really be prepared). To have no time at all makes it so much harder.

I was so sorry to hear this, and surprised because you hadn't mentioned him being sick. On one hand, it's better I guess for him to have not had to suffer and good that you didn't have to see him suffer, but the sudden loss is so hard in its own way. I know I was devastated when we lost our little kitten and we'd only had him for a short time.

Hugs to you, my friend.

So sorry to hear this, Andrea. Losing a pet is always hard - they really are members of the family and the loss is huge. Hang in there!

It's never easy losing a pet. Thankfully you have many (great) pictures to remember the good times and joy.

I'm so sorry to hear about Simba, losing a pet is very hard. They take up more of our lives and hearts than we think.

So sorry to see this sad news. x

I can relate. Sorry for your loss.

Sorry for the loss. The pets are part of the family. I understand your feeling. Just now we decided to bring home, for the cures, a yellow cat like Simba because he has the back broken.

I'm so sorry to hear of the loss of your cat, Simba. It's so hard! In time, may the fond memories of good times replace your grief from his sudden loss.

oh I am so very sorry. I remember thinking I shouldn't be so sad it's just a cat...but they are so much more!! Sending you hugs

I'm so sorry! It's always hard to lose a pet.

I am so sorry for your loss.

So sorry about your kitty. I just was looking around your blog and noticed you started running at 50. I have been toying with the idea but thought 50 was to old to start running. Maybe you have inspired me. Don't want to jump into it to fast but am looking for an efficient exercise. Running seems to burn the most - the fastest.
I enjoyed reading you blog! I will put it on my list and follow along.

So sorry about your cat. It's always tough losing part of your family. From the pictures you can tell he had a wonderful life.

So sorry for your loss. It is so difficult to lose a pet, especially before their time! Thinking of you and your family.

I'm so sorry Andrea. I know how hard it is to lose a pet so I can feel your sadness and loss. Hope the other 2 cats give you some comfort these days.

So sorry to hear about your loss!

Sorry about your kitty.

Oh no, I'm so sorry Andrea. Losing a cherished pet is so hard. Big hugs to you and yours. May Simba live on in your heart.

So sorry to hear this...I remember this as a kid with Jesse (the kitty) and boots (also kitty).

At least you have to others to snuggle with!

Argh, so unexpected! I'm confused how he could become so sick so fast.