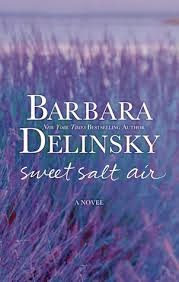 I read this book this week and loved it. I hated for it to end.  It takes place on an island in Maine which enhanced my love for the story a great deal.  I so would love to live on an island although my husband finds that very hard to believe as he  says I "am always on the go."  It also is about a cookbook. I seem to like books about cooking and sewing for no good reason as neither are a great love of mine.

Now I am reading:

I almost stopped reading it as it took me awhile to get into it. It is actually based on some pretty terrible history of eugenics in North Carolina.  I find it hard to believe this happened so easily.  I have a ways to go yet but it has captured me as the story is told with two points of view. One is a social worker who doesn't fit the mold of a doctor's wife and a poor uneducated girl with epilepsy who can be sterilized without her knowledge for that reason alone.

The Eugenics Board of North Carolina (EBNC) was a State Board of the state of North Carolina formed in July 1933 by the North Carolina State Legislature by the passage of House Bill 1013, entitled 'An Act to Amend Chapter 34 of the Public Laws of 1929 of North Carolina Relating to the Sterilization of Persons Mentally Defective'.[1] This Bill formally repealed a 1929 law,[2] which had been ruled as unconstitutional by the North Carolina Supreme Court earlier in the year.
Over time, the scope of the Board's work broadened from a focus on pure eugenics to considering sterilization as a tool to combat poverty and welfare costs. Its original purpose was to oversee the practice of sterilization as it pertained to inmates or patients of public-funded institutions that were judged to be 'mentally defective or feeble-minded' by authorities. In contrast to other eugenics programs across the United States, the North Carolina Board enabled county departments of public welfare to petition for the sterilization of their clients.[3] The Board remained in operation until 1977. During its existence thousands of individuals were sterilized. In 1977 the N.C. General Assembly repealed the laws authorizing its existence,[4]though it would not be until 2003 that the involuntary sterilization laws that underpinned the Board's operations were repealed.[5]
Today the Board's work is repudiated by people across the political, scientific and private spectrum.[citation needed] North Carolina is currently considering compensation for those sterilized under the Board's jurisdiction.[6]

I did not finish reading After Her from last week.  It never captured me and there are too many good books out there to finish one that just isn't.

I've read a few of Diane Chamberlain's books and always enjoyed them. I'll have to look for this - I always find it interesting when the author deals with controversial themes.

Ooh, I've barely got time to blog at the moment, let alone read a book. Can't wait until I've moved and have a bit more time.

the barbara delinsky one looks good!!