Goals I didn't meet:
I did not learn to change a flat. Two years of failing on this goal.
Improve 5K time for the year - only once.  I have gotten slower and need to work on this.

Goals I met:
I want to continue to cross train. Totally did this!  I spent many months riding, biking and swimming. Great job with this and I loved it.

I wanted to race with family. I did 5 races with family members.  Love this!

Jameson was taking this picture as Emily was cheering me
on the phone as I ran past.  Loved it!

Compete in 4 triathlons - I did 6 triathlons and 1 duathlon.  Loved meeting this goal. 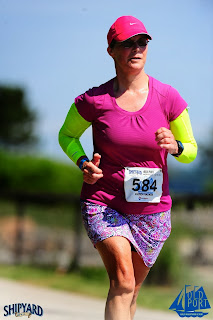 The hottest race ever but I might give it a try
again, just not in 2014.

Run New Races - I ran 5 new races, again not a hardship as I love doing this. The best new race was Pumpkin Man Triathlon for sure.
Place in Age Group - Aging up to 60s for the whole year of tris and latter part of running races rocked for sure. I placed 9 times.  There's not always a lot of us but I'll take it. 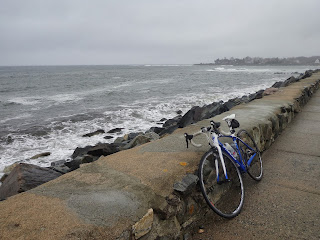 A cold wet day, riding in NH in April but I only
smile when I think about the ride.

Four New Bike Routes - I did do this.  This means longer mapped out bike routes.  I did one on the New Hampshire coast in the rain which was still quite fun. I did one that involved two ferries and was in both New York and Vermont. One was more to the middle of my state and I won't repeat it but I liked trying it and the other one was over the mountain (and through the woods) and I loved it and have already gone a few times.
Run 4 Half Marathons - I did 5. Plan to cut back for various reasons next year. Yet I love them so will I really?
Be in Top Half of Field - four times, nothing great but I did it a little.
Race a Month - I always like this goal as it gets me doing new races. I did not do this but I'm calling it a success because the only month I didn't race was March when I was recovering from a sprained ankle and that was a wise decision. I raced 21 times.  Apparently I like racing.

Goal I am Most Proud of: 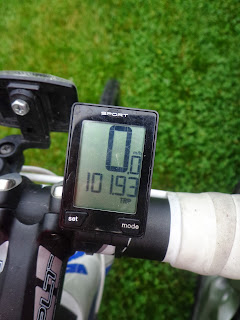 I did not meet this goal in 2012 but this summer I rode a century!!! It was a sponsored ride but I rode it alone.  It was a great ride. I was very proud and hope to do it again next summer.

I love your goals, you are awesome!!

I love the way you go after your goals...well, except the tire changing one. :) I took a couple years before I learned that. I can do it now, but I'm more than happy to let my guy friends be gentlemen and change them for me.

Great job meeting so many goals! Looking forward to seeing what 2014 has in store for you. :)

You've had another amazing, successful year. I swear there's nothing that slows you down - apart from the odd sprained ankle.

21 races and 6 tris? You are prolific! Even more unbelievable is that you managed not to get a flat (unless you had help?) in all those races. Awesome year!

Let's call it a rousing success of a Year!

All great goals. I am impressed how many races your ran with family! That is awesome.

learning to change a flat (presumably you mean on your bike) is SO EASY. Learn it first in 2014!! :-D

Great year! I hope the next one coming is just as epic! Happy New Year!

Nice job! You will have to learn to change that flat in 2014. :) If I can do it, anyone can. Congrats on all your accomplishments this year. Here comes 2014!

Congrats on reaching all those goals! May you have a successful New Year!

You had a fantastic year - way to go, you raceaholic, you (I can completely understand!). I know you'll set some equally challenging goals for 2014 and knock them out of the water. Looking forward to all your adventures.

And, um, yeah, I can't change a flat tire either...swore up and down I'd learn before I did the half IM, but opps.

You had a great year and met most of your goals!!
Happy New Year, Andrea!

You had a great year for sure! 21 races is really impressive. Racing with family must be nice too.

Looking forward to following along with your training and racing again next year.

Hooray! You did great with all your goals. You raced well and tried some new adventures.

You and I both joined the century club and boy oh boy is that an amazing accomplishment! Just the sheer distance is amazing. I often think about places that are 100 miles from here and think...I could ride my bike there!

Check, check and check! You set great goals and met almost all of them. A successful year! Hopefully you'll get the flat down in 2014, but only because you learn it and not because you need it!!