29 hours here and they've been busy ones!  When you visit my friend, Mary, you don't sit around on your butt even though this visit she is sporting a boot. She does what she can with you and happily encourages you to do more. At times she aggressively pushes you to do more.  Back to that in a minute. 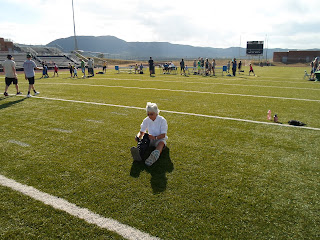 Mary in her boot.

Yesterday started out with a first stop at ......Boulder Running Company! Worked for me.  I left after purchasing a new pair of shoes and two shirts.  First I had to make multiple calls to my credit card company as my purchase was denied since I don't typically use my credit card in Colorado to make big purchases.  Next up we drove the race course for the Garden of the Gods race tomorrow (yikes!) and went on a short bike ride which was completely delightful and just the right length since I had been up since 3 in the morning and travelled cross country. 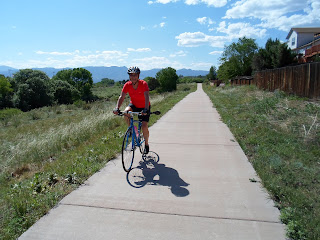 Plus Mary wanted us to hurry so we could get to a track meet where she encouraged me forced me to run!  I entered the 100 meter which might surprise you since I am not a sprinter or at all fast. But it was the first event so I would be done soon and the shortest event.  Just to put my mind at ease I found out that the other ladies in my heat won national events and one is trying out for the Olympics this year.  Mary took a video of the event and they are finishing as I am still a speck in the distance coming up the track. I am sure those audience members in the stands wondered who I was and why I was in the race.  But it was good training for my triathlon as I came in last and now I know how that feels! 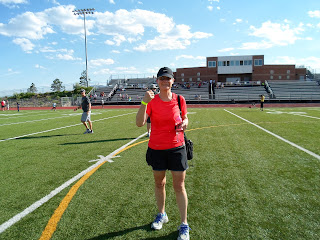 The wrist band is proof I was in this track meet.  Mary took a
video which you will never see.
Saturday started out with a quick trip to Denver to pick up Emily. On the way we saw antelope :) and beautiful mountains with snow on the top - truly the most beautiful sight in the world!  I was fascinated by all the outcroppings and various rock formations. 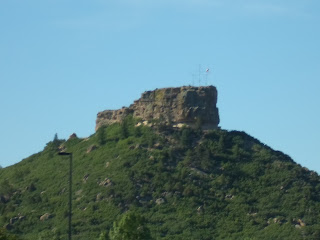 We got Emily settled in and headed to Waldo Canyon.  Mary cheerfully waited in the parking lot while we "ran" it.  The last time I visited this was my favorite event out of many wonderful ones.  I also loved it today but man was I tired and was it hard!  I don't remember that last time and I had hiked Pikes Peak the day before. I haven't aged that much in two years have I?  I definitely walked a fair amount today especially after I fell. I was worried about my footing and falling again.  I also managed to get lost - truly.
I got back to the trail after following a "false trail" that just ended and being once again behind a man and his dog I had already passed.  I ended up following them to the bench where I knew I would know my way plus my favorite daughter was sitting on it patiently waiting for me.  Waldo Canyon is loaded with gorgeous views.  I never run trails and it gave me a taste of that and a very healthy respect for those of you who do it all the time. It was about 7 miles but felt like more. I did like it when the guy in the running store commented when he heard we had run it: "That's a hard run."  Thanks!  Mary says Waldo gains about 1200 feet in elevation which is a lot in my book. 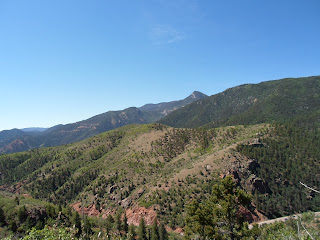 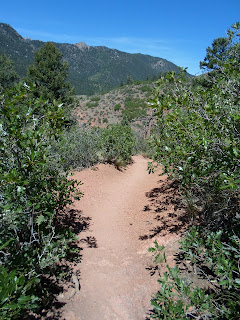 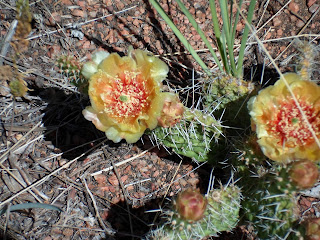 I am definitely not in Vermont. 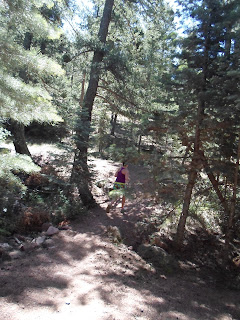 Em on the trail ahead of me. 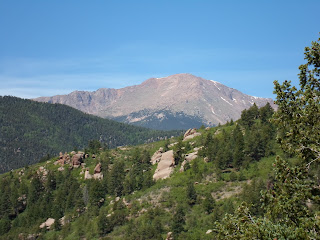 One of many shots I took of Pikes Peak from the trail. 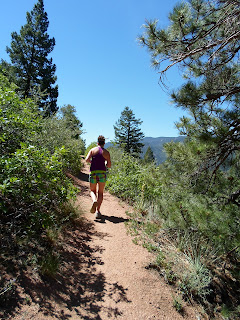 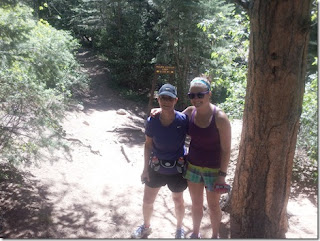 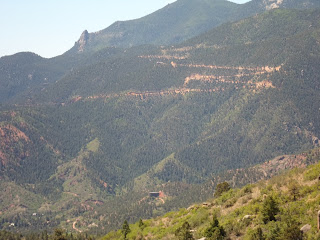 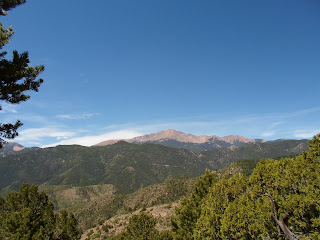 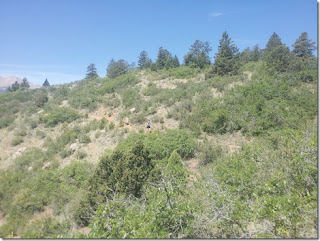 Look closely and you will see me in
the far distance.  I was WAY behind Em. 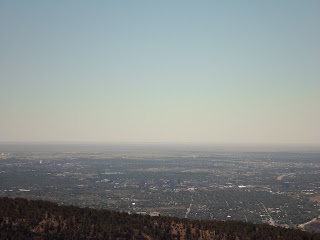 Looking down on Colorado Springs 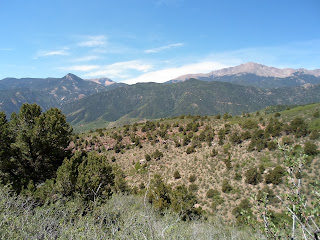 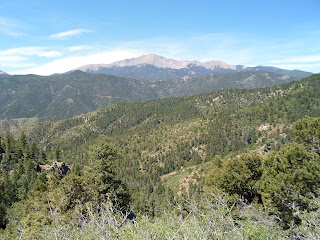 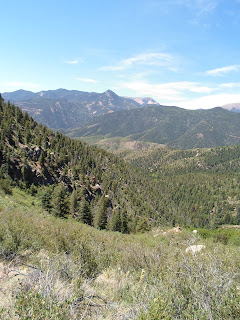 I really like this section looking down in the valley
between the sections the trail surrounds. At least
I think that is what it is! 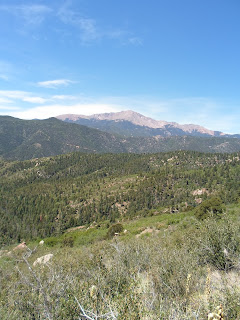 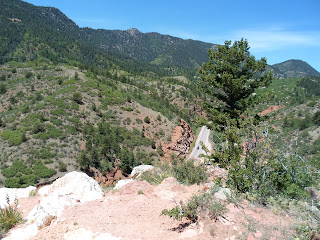 This is near the beginning and it fascinates me that the
interstate is so near so many beautiful hikes and runs. 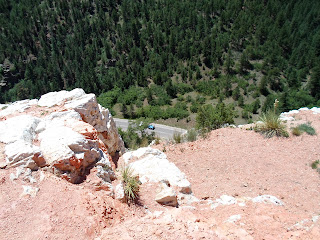 Last we went out for a tasty lunch, packet pick ups, and another trip to Boulder Running Company so Em could visit it.  Now we are relaxing.  Sigh....
No big goals for the race tomorrow.  I have not tapered although I always say I am not going to race it and I get caught up in it. But this is one hilly course and I don't expect much. I plan to take pictures but at the same time I want to have a respectable time. I am hoping to finish by 1:45.  We'll see.  It's certainly a great first race of my summer!
Posted by ajh at 10:19 PM

Do you guys ever sit still? Glad you "took it easy" for your race prep :) Have an awesome run tomorrow morning!

PS, Kathleen MUST know what shoes you bought?....

Pictures are beautiful. Love that you entered a track race. GOod luck today, can't wait to read about it!

By now, you are about finishing up Garden of the Gods. I hope you had a great day out there...perfect weather conditions. I've only done that course a couple times, I never do as well as I hope but it's so gorgeous so it doesn't really matter.

The interstate is so close so we can get to those trails easily :). I haven't been to Waldo Canyon in years, going to have to do that soon I think. Glad you had so much fun...and Boulder Running Co store I run on the race team for - love them. :)

Hope you did well for your race today. Looks like a busy trip! You are right about not keeping still!

This post had me laughing - your friend Mary sounds like a hoot! You entered the 100m in a track meet! So great to have people push you into doing random things that you would never do otherwise, especially when fun & relatively painless ;)

Sounds like you had a great day. I love the pictures. It's so majestic. Have fun running it today/tomorrow (I always get confused over the time difference.

The scenery looks pretty incredible! Have a great race!

You, girl, just don't know how to relax and take it easy, do you? :)
Great pictures. I love CO and with I could visit more often.
Don't you just hate when they deny your credit card like that? It used to be that I did not have to notify them about my travel plans. Then whenever I went abroad I needed to make sure they knew. Now it's interstate travel?

Love the pics! Colorado is such a beautiful place.