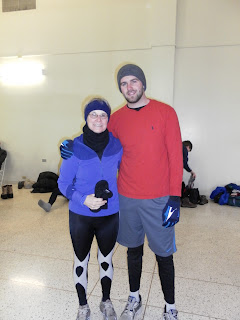 Before the race  - warm inside the PE
building!

First race post injury - A SUCCESS!  No pain!  Next time I'll try a slightly longer distance!  I'm thinking of the Polar Dash in Lake George which is 4 miles!  It can't be any colder than today was.  (Well, maybe it could be.  Last year it was absolutely freezing during this race especially as the winds whipped off the lake.)  Back to today.  The temperature during the race was 8 degrees.  I spent a lot of time wondering what I should wear.  I ended up with 3 layers on top (one too many about a half mile in) and just tights on the bottom.  That was fine.  I wore a headband with a hood pulled over it, a turtle fur and thick mittens.  I had not planned on snow covered ground and did not bring my Yak Trax.  It was snowing as we were racing and there was a surprising amount of snow on a lot of the course.  This definitely slowed me down. But no one else had Yak Trax around me so we were all on equal footing (pun intended).  I only caught my time at mile 1 and my pace was 9:30 at that point.  Yup!  I don't have my "speed" back.  I ended up doing 3 miles in 27:57 for a pace of 9:19.  That's okay.  It was slippery.  I'll get there.  Overall I was 45 out of 87 and 5/15 in my age group.  Jameson was 13th overall. What amazed me was the number of people doing a 15 K and a 30 K in that bitter weather!  Wow!  Impressive? Nuts? I don't know but I was thrilled we were doing the 3 miler!  This was a very low key race.  They give you your time at the finish, hand you a popsicle stick with your place and you go in and fill out the information on a card.  Low key but efficient!  We changed our clothes (oh what a feeling) and headed out for  a little shopping! 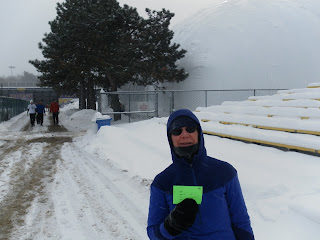 Finished -  I don't look quite as warm now! 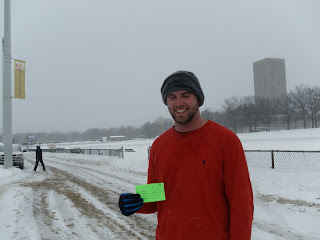 I should have switched cards with
Jameson so I could have the 13!

We went to L L Bean first as I had some coupons burning a hole in my pocket. I got two great items for 4 dollars! 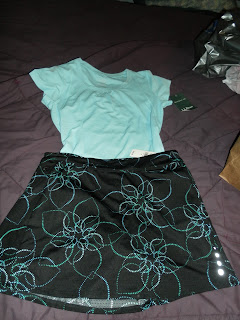 I got the shirt for Christmas
and bought the skirt today.  LOVE IT! 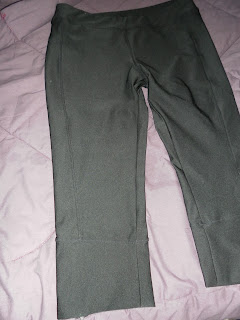 Love these capris - already have a pair

Then we went to Target.  They are redoing the store and it was hard to find stuff.  I managed to find a few things including new tights. I had new tights a week ago and went to wear them but couldn't rip the thing holding them together off. So brilliantly I used scissors!  Well, so much for that great thought. I could get to the tights but now they had a huge hole! 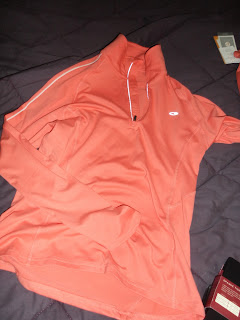 I  need  want another quarter zip so I
got this at Target! Love
the color.

Jameson wanted to stop at Reebok. While there I bought two t shirts. If there is anything I don't need it is t shirts but these were on sale and I could not resist them! 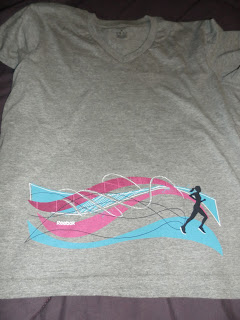 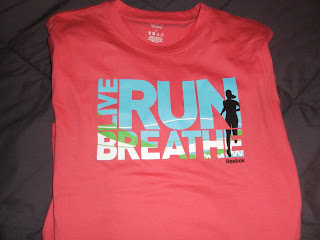 Emily called to see how our race went and Jameson promptly informed her that he is now my favorite child!  I tried to shout son but  he kept informing her I was saying my favorite one!  And they are how old?

All in all a great day!  I had tons of fun with Jameson, lots of time to chat plus I got a race in!  Life is very good!
Posted by ajh at 8:53 PM

So glad you went and had a great time :) Anything frostbitten? Hope not! We skipped our long run today because of the cold :(

Have a good week!

Glad it went well - Yes, it was COLD!!! Love the tee-shirts! Maybe I'll see you at the LG race. Hope it is warmer.

Oh, you are looking so good! Nice job on your first race back - 9:19 is great even without the challenging conditions. Did your face almost freeze off??? That's what I always notice when it is so cold - I can hardly talk, either, because my mouth gets frozen. You are a girl after my own heart - ALWAYS LOVE adding to the fitness wardrobe - plus you picked bright camera worthy pieces - good job! :-) Have a fantastic week!

Cuh-razy weather. Wow, you rocked that race. Super impressive results. 5 out 15 is awesome even if you hadn't been injured for so long. Congrats.

So glad your race went well! I really have to give you guys credit for running in those conditions - yak trakx or not that is still pretty fast for running in the snow!
And it looks like the shopping was equally succcessful...

A pain-free race and a successful shop. Who could ask for a better day?!!

That is one cold race! Congratulations on getting back from your injury so well.

Great race ... I've never ran one in the snow while recovering from an injury - that had to be a slippery slope (pun intended). I got my daughter that orange top from Target for Christmas ... wow, small retail world!

Yay! You did great...and that's fast to me :) so glad you ended up having a good time. Love the little teasing between your kids :)

Wow, I've never seen that much snow on the course before and I usually make it to most of the WS races. Congrats on your first race of 2011! It was cold but you did it. It also looks like you had a great time shopping. Me...I'm still on my couch. Sorry I didn't make it down to the race to meet you.

After completing this cold race you deserve all the t-shirts you want. Very impressive!
Glad you had no pain.

Nice work - welcome back to the racing game :)

Welcome back to racing! Excellent. And wow did you go on a shopping spree! Love the stuff you picked up.

Hahah, love that your grown kids still try to get their momma's #1 spot :).

Excellent score on the shirts, wowzie. I love the running ones at the bottom!!

Welcome back to the racing circuit sans heel pain - yahoooooo!!!

love all your purchases, what a great weekend. Welcome back to racing : )

LOL, my girls do the same thing, kidding each other about who is my favorite, and they're 33 & 39 yo! Sometimes, though, they'll say 'she's your mother', lol. I love the LIVE,RUN,BREATHE shirt. It sounds like you had a great time racing with your son.

This is so great Andrea: back at painfree running, a great day with your favorite son :) and bought some cool stuff! What a great weekend.

Woot for a pain-free race and for a great shopping haul!

Super congrats, that's completely awesome! Love the tights and all the new gear!

Ahh! The 1/4 zip! Fabulous! Great job on the frigid race! So glad your pain free now!!

Running followed by shopping - sounds like a great day to me! I got the socks in the mail. Thanks, they are so cute!

Love the stuff you got. That skirt is adorable.

yay for a pain free race! and i love the skirt you got from llbean.

email me lisenberger@comcast.net and I'll give you info about where i got my tshirt quilt done :-)

Happy to hear your race went so well! I know it's been a long road for you but you have been persistent! Cheers!

Congrats on the run! CUTE clothes, totally jealous and in need of cute running gear. Maybe I'll make it a reward for a race this year.

haha, got to love (grown up) kids.

Congrats on your return to racing! You look so happy and ran a great race, ESPECIALLY given those cold & snowy conditions!

Glad your race went well and you felt good! Congrats on the run! Great race considering the weather conditions.

Great Blog- looks like you have a blast- something.. the yak trax Picture got me.. awesome! congerats on the run- great inspiration :)
PS.. Hopefully headed to LLbean this weekend to burn a hole in my pocket too!

What a fabulous trip! So even with you feeling slower, and having to adjust to running on snow without your Yak Trax, you still blew any of my fast times out of the water. Congratulations on your racing return!!

I'm so glad to read that you're back to racing because I know how much racing means to you, and to race with your son, too! Well, I know that makes it even better! Great finishing time, too!