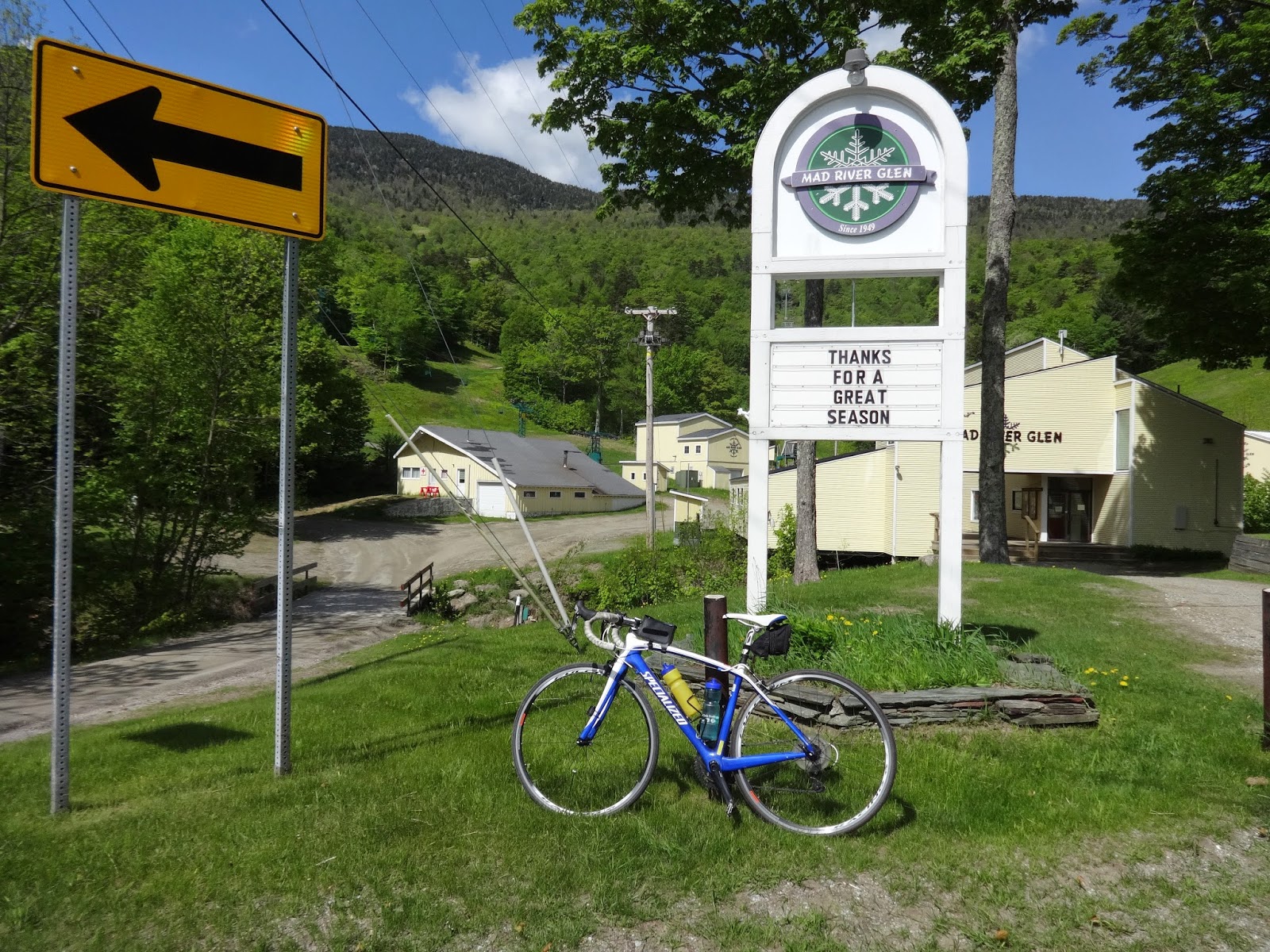 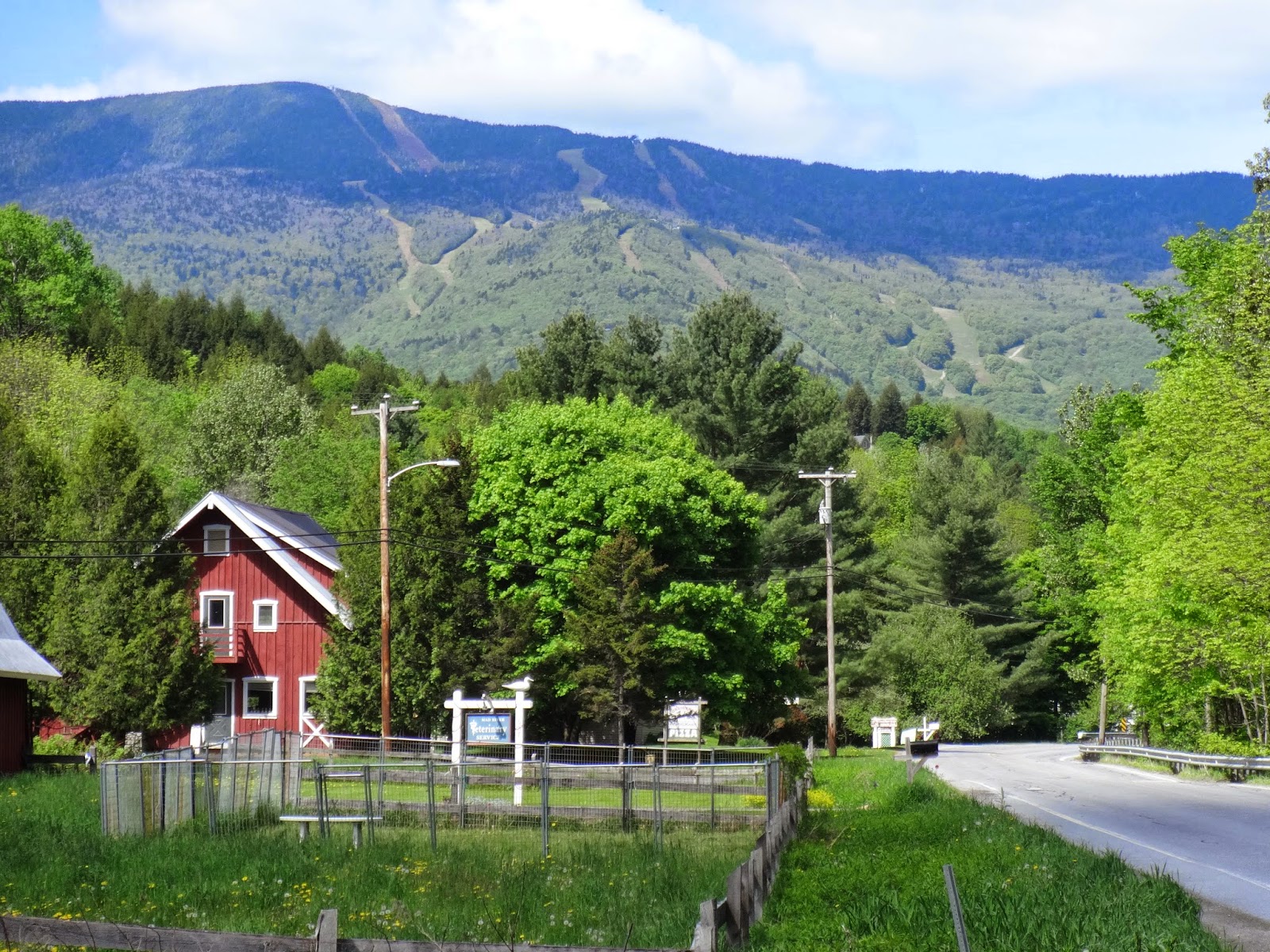 Sugarbush North in the background.


The same Century ride that I did last year is in 3 weeks.  Can I do it?  I did 60 today and I.AM.BEAT!
Last year the most I had done before the ride was 60 but I don't remember being so tired after the 60.  Next weekend I have a duathlon and will not be riding long.  I am not sure about the following weekend so this may be it.  The Century is flat until the last 15 miles. Today I was riding a 40 mile route that I was going to add to so I went up the mountain right away to do 5 up, 5 down. I had never ridden this before and anyone who saw me may have thought I was heading over one of the mountain gaps in the region that so many riders go over. NOPE.  I wasn't feeling that hard core but I will say even what I did was a bit of a challenge. The last mile in particular was tough and I was sweating like a pig when I got to the ski area.  Then I turned around for that blessed downhill although I rode my brakes pretty hard.

But I did run 8 and ride 26 yesterday so I wasn't exactly rested!  Just thought of this. 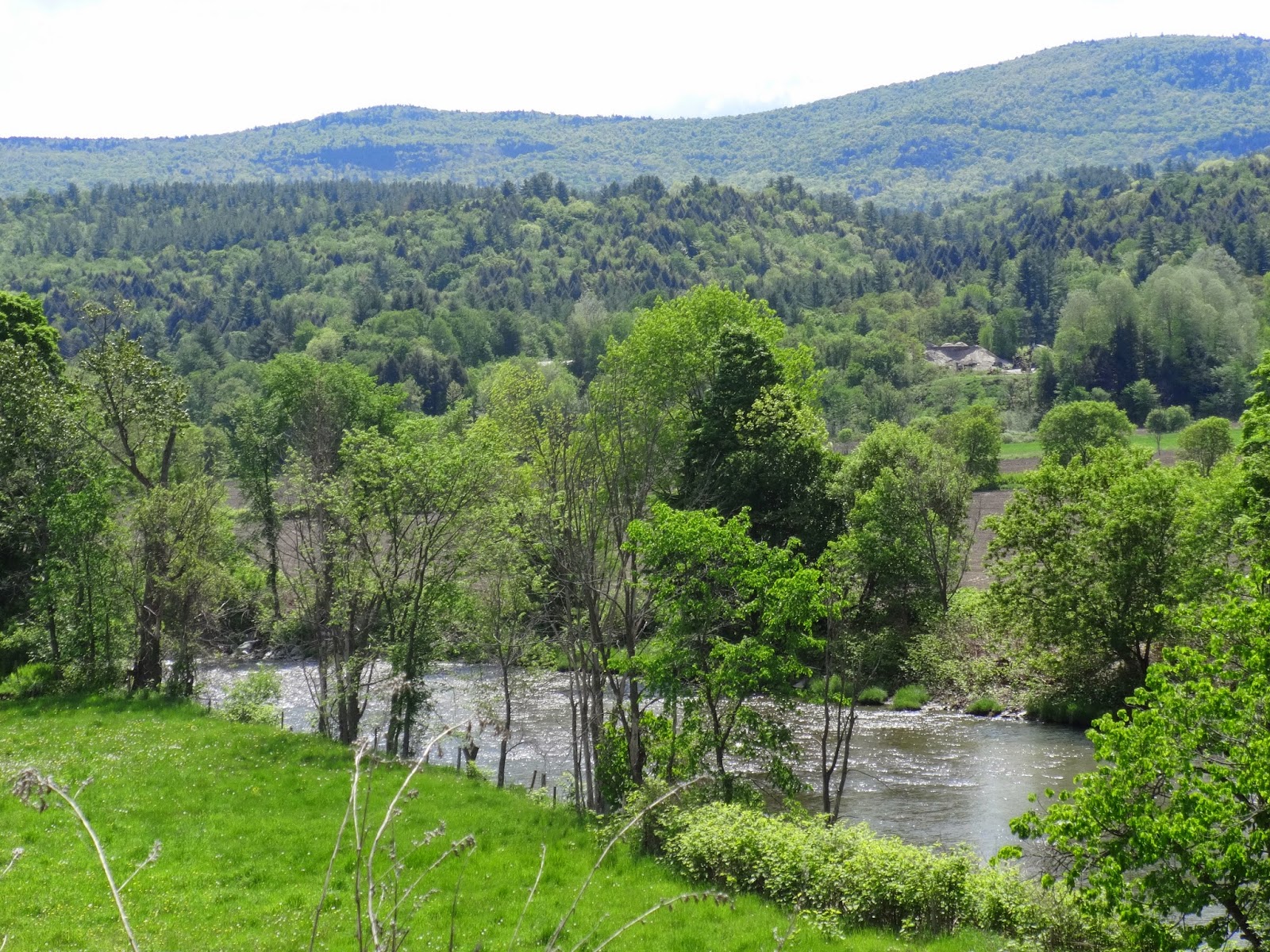 You follow this river for most of the way. 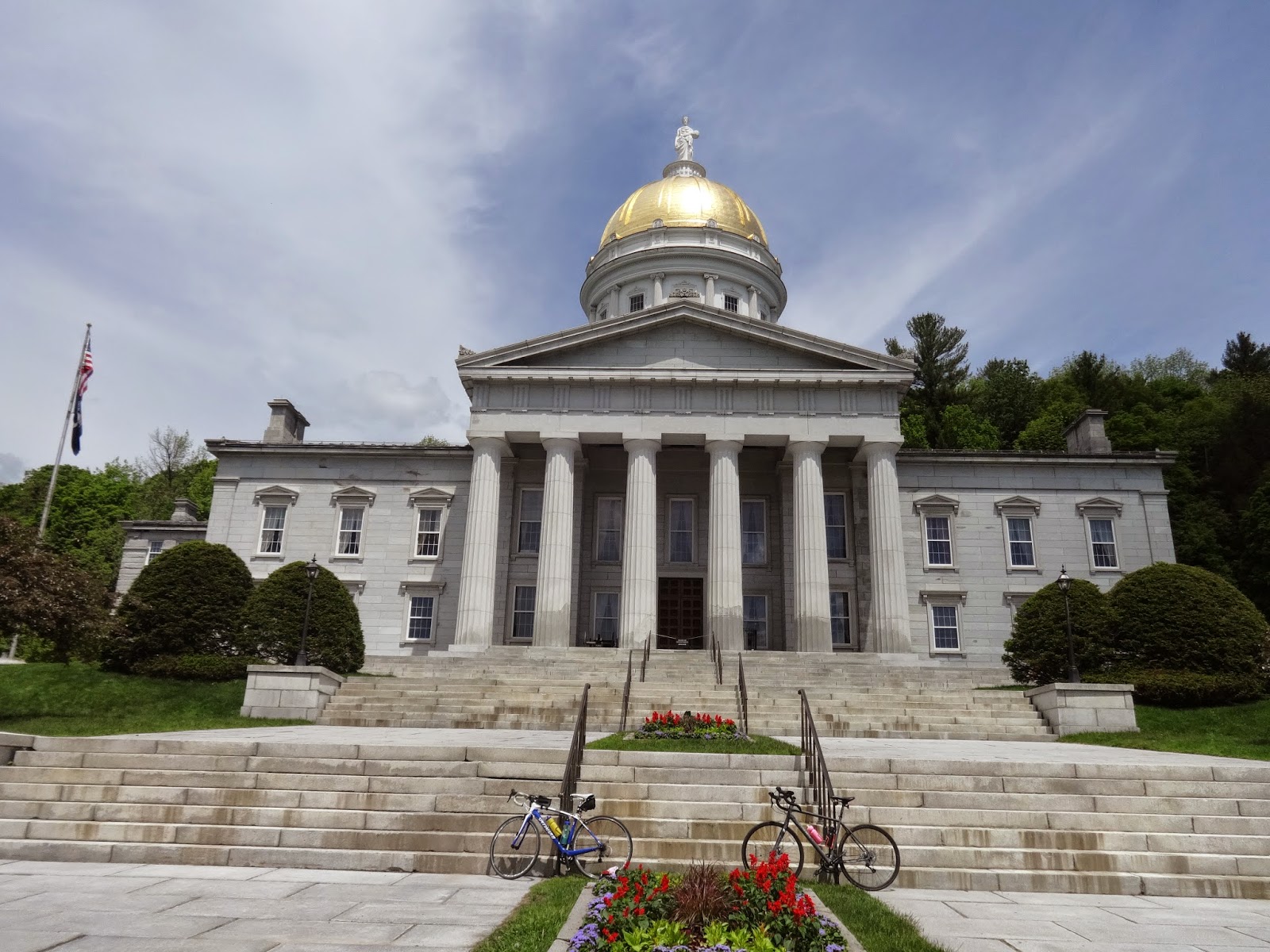 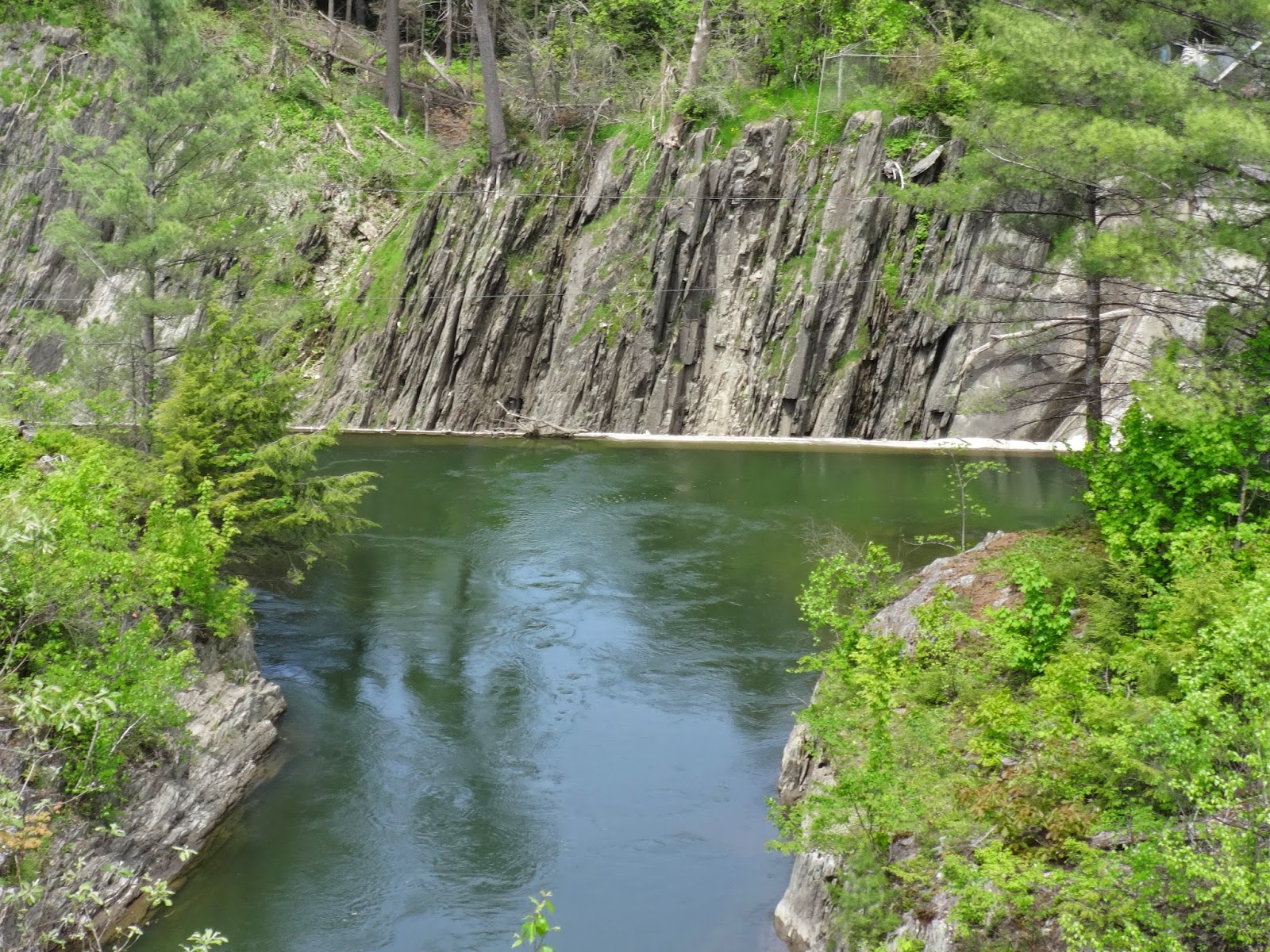 So much of this ride is gorgeous. 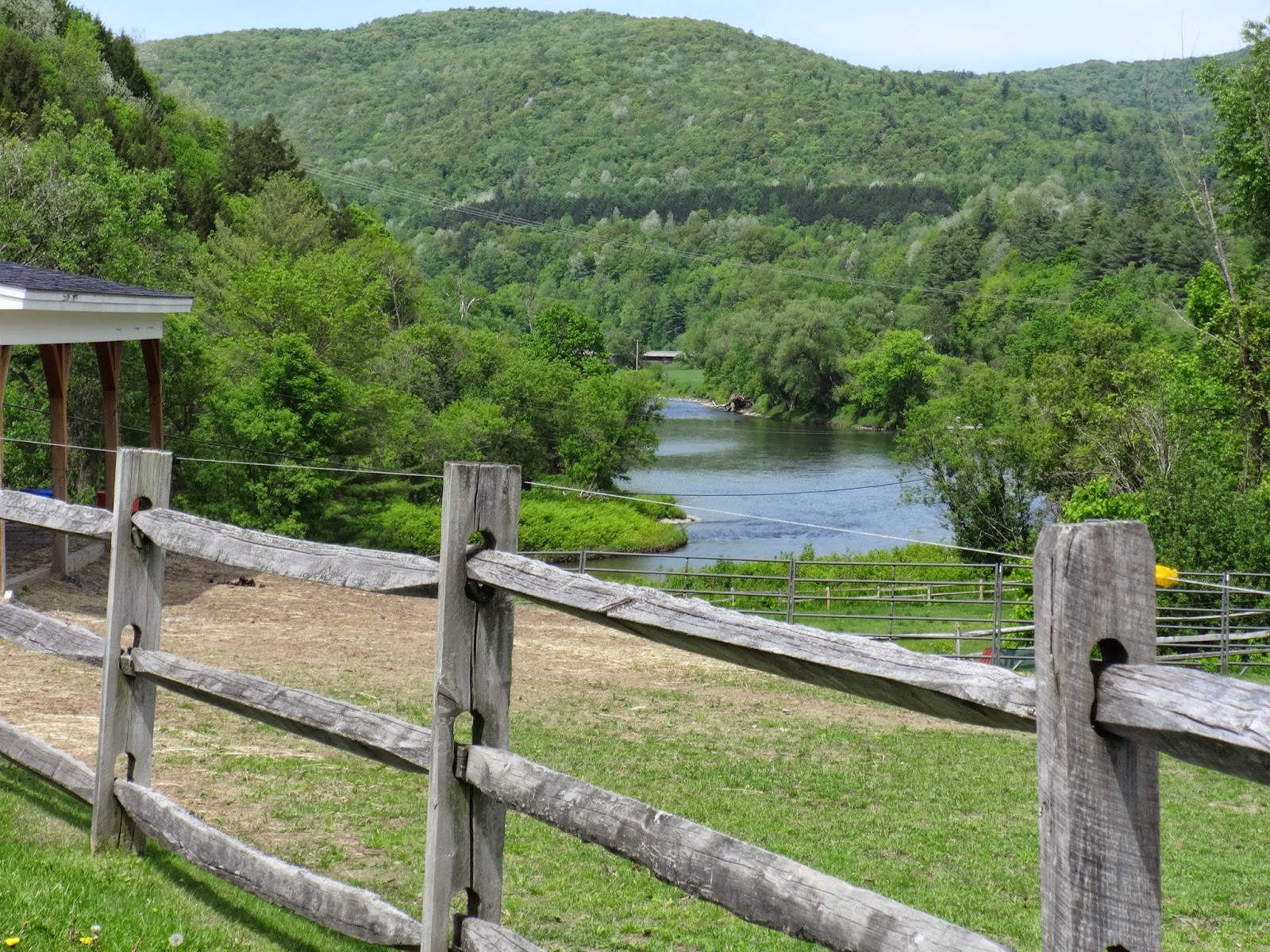 Then I met my friend for the 40 mile ride I have done a couple of times. I was thinking it was 30 but 40 was even better. The route is beautiful and it was a perfect day.  You feel like you are going to be going nothing but up on the way back but that is not the case. A route that makes you think you are going downhill in two directions is okay with me.  We ended up at the Capitol building which is a great spot for a little rest and a snack.

On the way back my friend took off while I added more miles.  I do like riding alone and not worrying about holding people up. I am typically the slow one in the bunch.  I can stop and take pictures and go my own pace.  When I got back to my car I needed 3 more miles.  HUGE groan. But I did it even though I so didn't want to.  I had actually accepted early on that I would only be doing 40 or so as I was feeling quite spent.  But I got a second wind, knew I would do at least 50 and couldn't resist going after my original goal of 60.

You can absolutely do it Andrea. I have total faith in your ability.

You can do it!
And the scenery will help you to do it.

Ditto from my side! You can definitely do it. Go for it!

That route is gorgeous!

I think you can do it. You've got a lot of miles in already, and like you said you'd run and ridden the day before, and that can make a big difference.

Totally know what you mean about being just fine on your own bc you don't have to worry about slowing anyone down. That's how I was my last leg at DK. I was riding with a friend who was feeling really strong, and I ended up telling her to go on ahead so I could just go as slowly as I wanted.

I think you can totally do it! Good luck! :)

of course you can. Can I run 10 miles from Lake George to Bolton landing? I guess you will be busy on June 22.

You can do it! Just take a rest day or 2 before and you'll be fine.

Gorgeous pics by the way.

You know you can. 30 miles is a big bike ride for me so I really admire your distances! Cycling really comes into its own in the summer doesn't it? :-)